An amazing glow-in-the-dark cockroach, a harp-shaped carnivorous sponge and the smallest vertebrate on Earth are just three of the newly discovered top 10 species selected by the International Institute for Species Exploration at Arizona State University. A global committee of taxonomists – scientists responsible for species exploration and classification – announced its list of top 10 species from 2012 today, May 23.

Lilliputian Violet
Not only is the Lilliputian violet among the smallest violets in the world, it is also one of the most diminutive terrestrial dicots. Known only from a single locality in an Intermontane Plateau of the high Andes of Peru, Viola lilliputana lives in the dry puna grassland eco-region. Specimens were first collected in the 1960s, but the species was not described as new until 2012. The entire above-ground portion of the plant is barely 1 centimeter tall. Named, obviously, for the race of little people on the island of Lilliput in Jonathan Swift’s "Gulliver’s Travels." 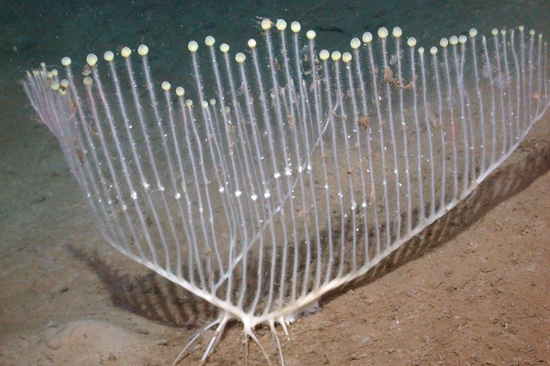 Lyre Sponge
A spectacular, large, harp- or lyre-shaped carnivorous sponge discovered in deep waters (averaging 3,399 meters) of the northeast Pacific Ocean, off the coast of California. The harp-shaped structures, or vanes, number from two to six and each has more than 20 parallel vertical branches, often capped by an expanded, balloon-like, terminal ball. This unusual form maximizes the surface area of the sponge for contact and capture of planktonic prey. 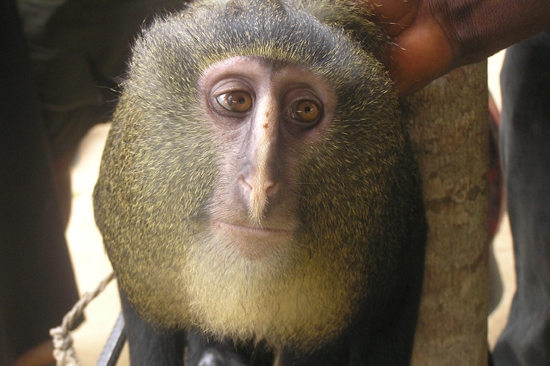 Lesula Monkey
Discovered in the Lomami Basin of the Democratic Republic of the Congo, the lesula is an Old World monkey well known to locals but newly known to science. This is only the second species of monkey discovered in Africa over the past 28 years. Scientists first saw the monkey as a captive juvenile in 2007. Researchers describe the shy lesula as having human-like eyes. More easily heard than seen, the monkeys perform a booming dawn chorus. Adult males have a large, bare patch of skin on the buttocks, testicles and perineum that is colored a brilliant blue. Although the forests where the monkeys live are remote, the species is hunted for bush meat and its status is vulnerable. 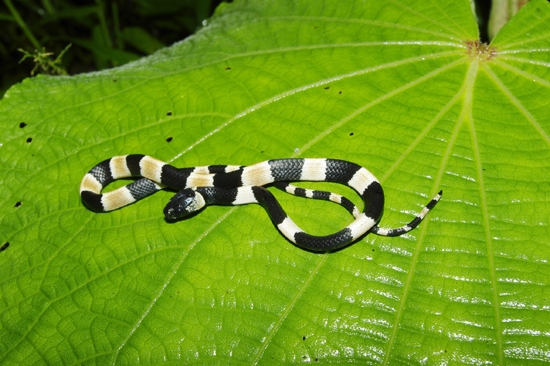 No to the Mine! Snake
A beautiful new species of snail-eating snake has been discovered in the highland rainforests of western Panama. The snake is nocturnal and hunts soft-bodied prey including earthworms and amphibian eggs, in addition to snails and slugs. This harmless snake defends itself by mimicking the alternating dark and light rings of venomous coral snakes. The species is found in the Serranía de Tabasará mountain range where ore mining is degrading and diminishing its habitat. The species name is derived from the Spanish phrase “No a la mina” or “No to the mine.” 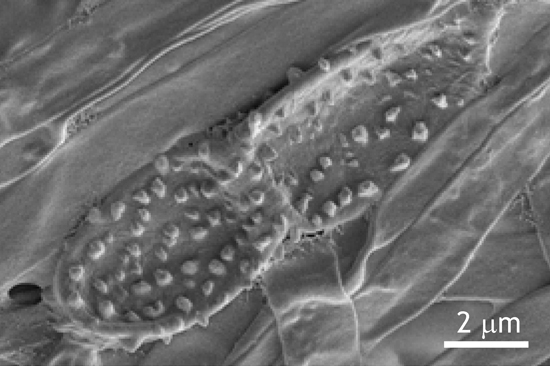 A Smudge on Paleolithic Art
In 2001, black stains began to appear on the walls of Lascaux Cave in France. By 2007, the stains were so prevalent they became a major concern for the conservation of precious rock art at the site that dates back to the Upper Paleolithic. An outbreak of a white fungus, Fusarium solani, had been successfully treated when just a few months later, black staining fungi appeared. The genus Ochroconis primarily includes fungi that occur in the soil and are associated with the decomposition of plant matter. While the two new species isolated from Lascaux are so far know to be harmless, at least one species of the group, O. gallopava, causes diseases in humans with compromised immune systems. 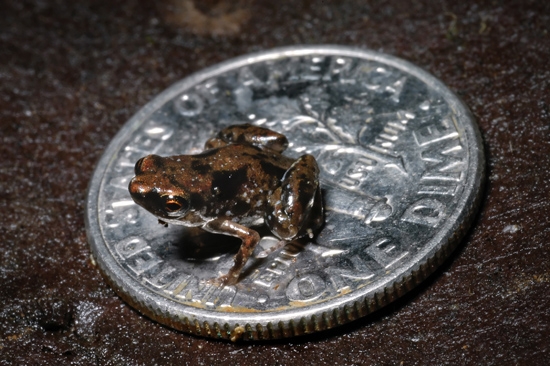 World’s Smallest Vertebrate
Living vertebrates – animals that have a backbone or spinal column – range in size from this tiny new species of frog, as small as 7 millimeters, to the blue whale, measuring 25.8 meters. The new frog was discovered near Amau village in Papua, New Guinea. It captures the title of ‘smallest living vertebrate’ from a tiny Southeast Asian cyprinid fish that claimed the record in 2006. The adult frog size, determined by averaging the lengths of both males and females, is only 7.7 millimeters. With a few exceptions, this and other ultra-small frogs are associated with moist leaf litter in tropical wet forests – suggesting a unique ecological guild that could not exist under drier circumstances. 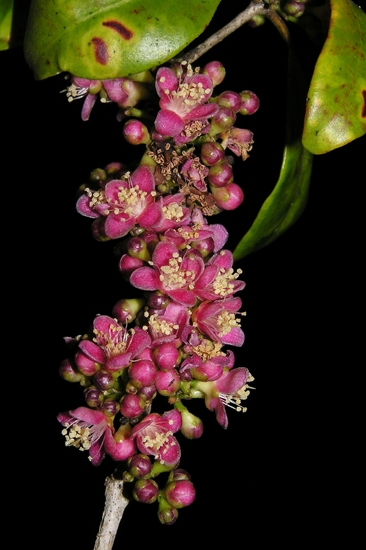 Endangered Forest
Eugenia is a large, worldwide genus of woody evergreen trees and shrubs of the myrtle family that is particularly diverse in South America, New Caledonia and Madagascar. The new species, E. petrikensis, is a shrub growing to 2 meters with emerald green, slightly glossy foliage and beautiful, dense clusters of small magenta flowers. It is one of seven new species described from the littoral forest of eastern Madagascar and is considered to be an endangered species. It is the latest evidence of the unique and numerous species found in this specialized, humid forest that grows on sandy substrate within kilometers of the shoreline. Once forming a continuous band 1,600 kilometers long, the littoral forest has been reduced to isolated, vestigial fragments under pressure from human populations. 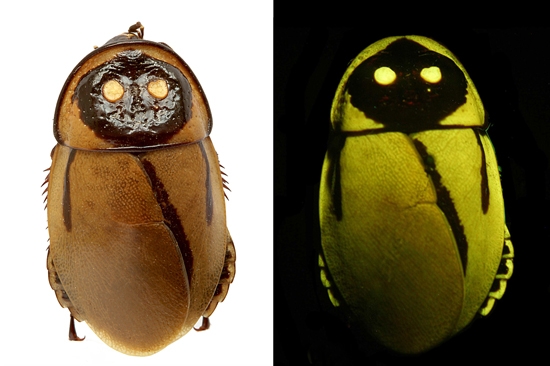 Lightning Roaches
Luminescence among terrestrial animals is rather rare and best known among several groups of beetles — fireflies and certain click beetles in particular – as well as cave-inhabiting fungus gnats. Since the first discovery of a luminescent cockroach in 1999, more than a dozen species have (pardon the pun) “come to light.” All are rare, and interestingly, so far found only in remote areas far from light pollution. The latest addition to this growing list is L. luckae, that may be endangered or possibly already extinct. This cockroach is known from a single specimen collected 70 years ago from an area heavily impacted by the eruption of the Tungurahua volcano. The species may be most remarkable because the size and placement of its lamps suggest that it is using light to mimic toxic luminescent click beetles. 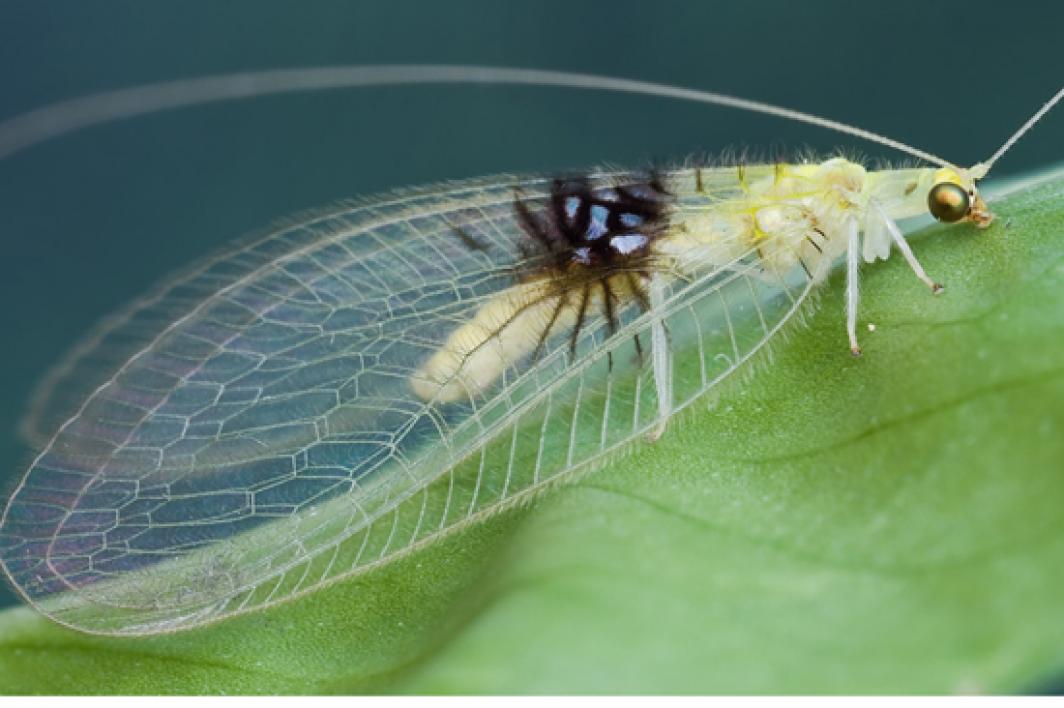 No Social Butterfly
In a trend-setting collision of science and social media, Hock Ping Guek photographed a beautiful green lacewing with dark markings at the base of its wings in a park near Kuala Lumpur and shared his photo on Flickr. Shaun Winterton, an entomologist with the California Department of Food and Agriculture, serendipitously saw the image and recognized the insect as unusual. When Guek was able to collect a specimen, it was sent to Stephen Brooks at London’s Natural History Museum who confirmed its new species status. The three joined forces and prepared a description using Google Docs. In this triumph for citizen science, talents from around the globe collaborated by using new media in making the discovery. The lacewing is not named for its color – rather for Winterton’s daughter, Jade. 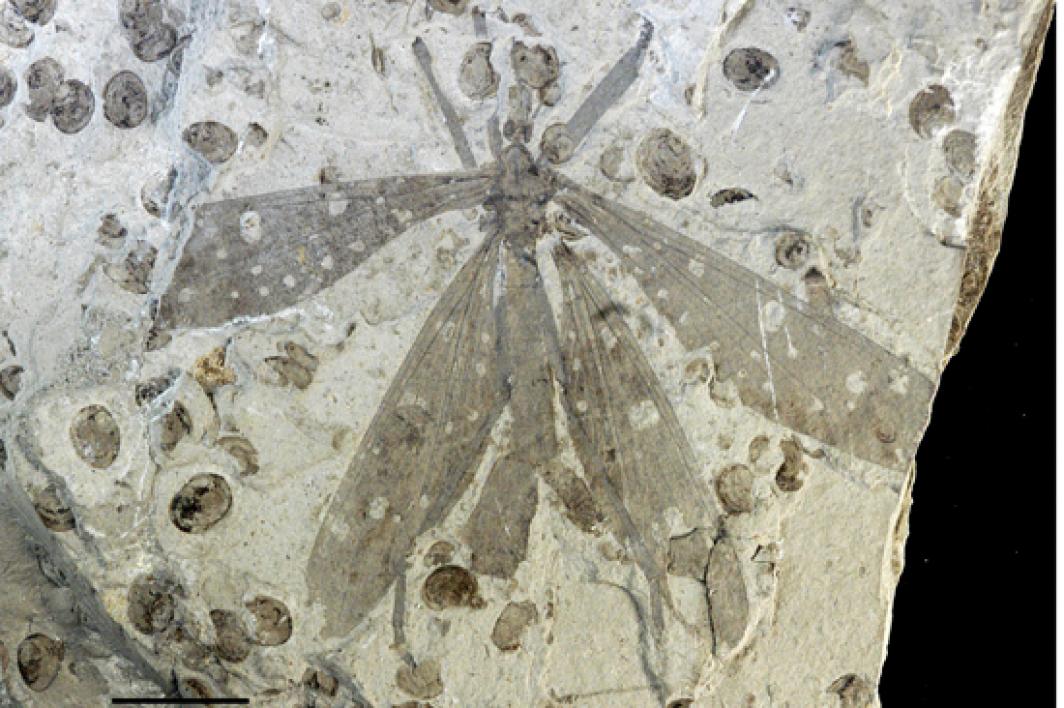 Hanging Around in the Jurassic
Living species of hangingflies can be found, as the name suggests, hanging beneath foliage where they capture other insects as food. They are a lineage of scorpionflies characterized by their skinny bodies, two pairs of narrow wings and long, threadlike legs. A new fossil species, Juracimbrophlebia ginkgofolia, has been found along with preserved leaves of a gingko-like tree, Yimaia capituliformis, in Middle Jurassic deposits in the Jiulongshan Formation in China’s Inner Mongolia. The two look so similar that they are easily confused in the field and represent a rare example of an insect mimicking a gymnosperm 165 million years ago, before an explosive radiation of flowering plants.