Cameron Mackintosh's new production of Andrew Lloyd Webber's "The Phantom of the Opera," coming to ASU Gammage May 27 through June 7, 2015, are now on sale.

With newly reinvented staging and stunning scenic design, this new version of "Phantom" will be performed by a cast and orchestra of 52, making it one of the largest productions on tour in North America. To purchase tickets, visit asugammage.com or call 480-965-3434. Ticket prices start at $20, plus applicable fees. 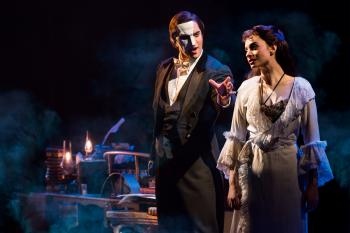 “It’s wonderful to have a new production of 'Phantom' touring America now that the show has celebrated over 25 years on Broadway. Director Laurence Connor has done an amazing job and this production has received huge critical acclaim in the UK,” Webber said.

This new production of "The Phantom of the Opera" is directed by Laurence Connor, with choreography by Scott Ambler, set design by Paul Brown, Tony Award-winning original costume design by Maria Björnson, lighting design by Tony Award-winner Paule Constable, sound design by Mick Potter and musical supervision by John Rigby. The production is overseen by Matthew Bourne and Cameron Mackintosh.

Based on the classic novel "Le Fantôme de L’Opéra" by Gaston Leroux, "The Phantom of the Opera" tells the story of a masked figure who lurks beneath the catacombs of the Paris Opera House, exercising a reign of terror over all who inhabit it. He falls madly in love with an innocent young soprano, Christine, and devotes himself to creating a new star by nurturing her extraordinary talents and by employing all of the devious methods at his command.

Arizona State University has been named a "Military Friendly School for 2015" by G.I. Jobs magazine for the sixth consecutive year.

Arizona State University has been named a “Military Friendly School for 2015” by G.I. Jobs magazine for the sixth consecutive year. The list honors the top 15 percent of colleges, universities and trade schools that are leaders in providing educational support benefits and paths to success for military veterans.

ASU was also ranked No. 2 as a "Best College For Veterans" by College Factual. The ranking compared the best colleges and universities for veterans nationwide, based on four-year undergraduate programs. ASU has made a strong commitment to veteran success in education and has awarded undergraduate and graduate degrees to students using GI Bill benefits since the program's rollout in 2009. ASU opened the Pat Tillman Veterans Center in fall 2011 and has continued to expand services to support a military, veteran and dependent population that has grown to over 4,400 students. In spring 2014, over 250 military and veteran students were approved for graduation and were honored at commencement with stoles that recognized their respective branch of military service.

Additionally, ASU is a partner university with the Pat Tillman Foundation in support of the Tillman Military Scholars program, which provides scholarships for active and veteran service members as well as their spouses. This year, Diana Kramer was selected to represent Sun Devils everywhere in the 2014-2015 cohort.The Tillman Military Scholars program covers not only direct study-related expenses such as tuition and fees, but also other needs, including housing and childcare.

ASU’s veteran center is also home to VetSuccess on Campus, one of the original eight institutions selected to pilot this joint program with the VA. The program provides a VA vocational rehabilitation counselor on campus to assist students with transition from military to university life, as well as providing academic, career and adjustment counseling. The center also offers peer mentoring and assistance with benefits and registration.