In nomination letters from current and former Ph.D. students, they are lauded as tireless advocates for their students and mentors who challenge their students to be the best they can be. Students frequently speak of being inspired to pursue their dreams, to meet challenges that they had never before thought possible and to find courage to fulfill goals beyond their own expectations. 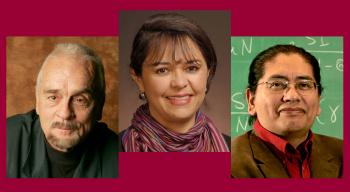 All three mentors have a special gift in attracting and inspiring students from diverse backgrounds, including underrepresented and ethnic minorities, international students and women.

“In reviewing the accomplishments of these mentors and the nominations submitted by their deans/directors and former doctoral students, it is apparent that these three have achieved an extraordinary ability to inspire the professional and personal lives of their students,” says Maria T. Allison, Executive Vice Provost for Academic Affairs and Dean of the Graduate College.

“The evolution of my mentorship philosophy has been driven by my strong desire to increase the participation of underrepresented groups in the mathematical sciences,” writes Carlos Castillo-Chavez in his mentoring essay. A Regents’ Professor and Joaquin Bustoz Jr. Professor of Mathematical Biology in the School of Human Evolution and Social Change, Castillo-Chavez is the director of the Mathematical, Computational and Modeling Sciences Center (MCMSC), the Mathematical and Theoretical Biology Institute (MTBI), and the Institute for Strengthening the Understanding of Mathematics and Science (SUMS).

His students credit him with the motivation and practical support that helped them succeed in a field where Hispanics and other minorities are vastly underrepresented.

“He has infinite patience to work one-to-one with students on technical details of mathematical biology,” says former doctoral student Ariel Cintrón-Arias, now an assistant professor at East Tennessee State University. “He goes the extra mile to mentor students in public speaking…he teaches students about technical writing by publishing papers with them; and last but not least Carlos has a remarkable gift to build communities that develop scholarly interactions.”

Castillo-Chavez is widely recognized for his research on the mathematical modeling of infectious diseases. In addition to authoring nearly two hundred publications, he has received numerous awards, including the U.S. Presidential Award for Excellence in Science, Mathematics and Engineering Mentoring; the American Mathematical Society Distinguished Public Service Award; the American Association for the Advancement of Science (AAAS) Mentor award; and the Society for the Advancement of Chicanos and Native Americans in Science (SACNAS) Distinguished Scientist Award.

President Obama appointed Carlos Castillo-Chavez to the President’s Committee on the National Medal of Science for the period 2010-2012.

After 18 years at Cornell University, Dr. Castillo-Chavez joined ASU in 2003.

“It became clear early in my mentoring that it was important for me to be supportive, patient, and compassionate as I challenge students to go beyond their initial expectations,” says Pat Lauderdale.

In addition to being a highly respected scholar nationally and internationally, with 11 books and over 150 other publications, he is particularly sought as a mentor by students who are members of underrepresented minorities or international students. A doctoral student from China, now Dean of Peking Law School in Beijing, and a deaf student, now a professor at Gallaudet University in Washington, D.C,. praise Pat Lauderdale’s mentorship for the inspiration and practical assistance that guided them through difficult challenges.

“If it were not for Dr. Lauderdale, I would not have earned my Ph.D.,” asserts Barbara Gray, a Native American woman who is the Tribal Court Attorney/Administrator for the St. Regis Mohawk Tribe.

As a professor of justice and the former director of the ASU Ph.D./J.D. program in Justice Studies, Law, and the Social Sciences, Lauderdale’s teaching and research interests include comparative law, indigenous jurisprudence, diversity, global indigenous struggles and international terrorism. He has been a National President of Phi Theta Kappa Honorary Society, a Fulbright Senior Specialist, and a Woodrow Wilson Scholar. He was recently appointed as a visiting scholar at the Center for Comparative Studies in Race and Ethnicity at Stanford University.

Lauderdale received his Ph.D. from Stanford University and joined ASU in 1981.

“In my genuine appreciation for variety in perspectives, positions, and purpose my mentoring is not bound by disciplinary demarcations or institutional constraints,” says Cecilia Menjívar.

The words her students most often use to describe her are: integrity, commitment, focus, determination and tirelessness. Their nomination letters reveal her as an advocate for her graduate students throughout their academic life, the job search and their professional careers.

“Cecilia Menjívar has worked tirelessly and selflessly for my advancement in academia,” says Sang Hea Kil, an assistant professor at San Jose State University.“ (She guided) me and many other students toward finishing our degree with integrity. And she also followed through to make sure we got great jobs after we received our degree.”

Menjívar has received the Outstanding Mentor Award from the ASU Graduate Women‘s Association,among other honors. Her research interests focus on family dynamics and race, ethnicity and migration, and the social worlds of individuals who live in hostile and violent environments, particularly in Central America.

She has authored, co-authored or edited numerous publications, including five books, and over 80 articles, professional journals, book chapters and other papers. Her new book is Enduring Violence: Ladina Women's Lives in Guatemala.

Menjívar graduated from the University of California at Davis and joined ASU’s School of Justice Studies in 1996.

Discover more about the 2011 Outstanding Doctoral Mentors at graduate.asu.edu.

ASU employees using ASU voicemail can now receive voicemail messages via their asu.edu email address. By opting-in to this new service, voicemail messages are delivered as a .wav audio file and can be played and stored anywhere email is accessible, such as from a computer or smartphone.

Those who elect to participate in this new service will no longer receive message waiting lights or be able to dial into their voicemail system to receive messages. Users may opt-out of the service at any time.

Office of Business and Finance Employee