Students majoring in a variety of fields, ranging from communication and education to engineering and supply-chain management, are among the most recent recipients of the Arizona State University Alumni Association’s Legacy Scholarship program, which was established in 2010 to help students who have a family tradition of attending ASU. Thirteen students have previously been recipients of the scholarship.

Relatives of ASU Alumni Association members are eligible to apply for the scholarship. The 10 recipients for the 2012-13 school year will receive $1,200 each, or $600 in aid per semester.

The following students have been selected as 2012-13 Legacy Scholars:

Lisa Atkinson is majoring in music education at ASU and anticipates a 2015 graduation. Her uncle is a proud ASU alumnus who advocated for Atkinson to become a Sun Devil. She maintained a 3.98 GPA at Glenwood Springs High School in Glenwood Springs, Colo., and participated in numerous musical competitions. She received multiple awards in songwriting and original composition, and placed in a percussion world championship. At ASU, Atkinson has been active in the music department and the America Reads program. As an alumna, she would like to continue to give back to the ASU community of which she and her uncle are so grateful to be a part.

Anne Carman is a junior at ASU majoring in communication and minoring in media analysis. She attended Royal High School in Simi Valley, Calif., and participated in many extracurricular school activities, including Relay for Life and tennis. While in high school she was captain of her high school varsity tennis team, and received a scholar athlete achievement award and a coach’s award for her service to the team. Carman was also a youth tennis camp volunteer. At ASU, Carman is a member of the Association of Human Communication and a student events intern with the ASU Foundation for a New American University. Her mother is a proud alumna who represents ASU by being involved with the Los Angeles ASU Alumni Association chapter and the ASU Alumni Admissions Ambassador program, and Carman plans on doing the same one day, because she believes that being a Sun Devil is who she was meant to be.

Megan Conroy, a senior at ASU, is pursuing degrees in supply-chain management and marketing. Her brother, Brandon, was her inspiration to attend ASU. She graduated from Highland High School in Gilbert, and attended Oklahoma City University and Chandler-Gilbert Community College, maintaining a 4.0 GPA at both institutions. She anticipates a 2013 graduation from ASU, where she has been deeply involved in the community as a member of the Sun Devil Spirit Squad and as a member of the international honor society Beta Gamma Sigma. Conroy motivates youth to maintain a strong work ethic and love for dance while working as a dance instructor in the Valley and plans on continuing to be an ASU role model for girls who want to grow up to be dancers or cheerleaders.

Don Green plans to major in engineering at ASU. He was an honor student who ranked in the top 10 percent of his class at Marcos De Niza High School in Tempe, and was involved in many school-related activities, including band, choir and drama. Green wrote in his scholarship application that he is eager to attend the university and to become involved in organizations like the Sun Devil Marching Band and Engineers Without Borders. His father is a proud lifetime member of the ASU Alumni Association, and Green wishes to follow in his footsteps, so that he may receive the same outstanding education his father did.

Kaitlin Grunst is planning to double-major in special education and elementary education at ASU. Five of her family members have graduated from the university, including her mother, and Grunst always has wanted to do the same. She graduated from St. Viator High School in Arlington Heights, Ill., then attended Eastern Illinois University, where she maintained a 3.89 GPA. Grunst has been involved in many philanthropic organizations including Alpha Phi Fraternity, the Phi Eta Sigma honors society and A.R.R.O.W (Advocating the Rights and Relief of Women). She plans on continuing to give back to the community as an ASU student and alumni.

Alyssa Hansen, a sophomore at ASU, is majoring in filmmaking practices at ASU. She graduated from Woodbridge High School in Irvine, Calif., and studied at Irvine Valley College, where she maintained a 4.0 GPA. She anticipates a 2015 graduation from her bachelor’s program at ASU. She says she “eats, sleeps and breathes maroon and gold” as a member of the Sun Devil Marching Band and as a member of the national band honor fraternity Kappa Kappa Psi. Hansen also has been involved in numerous marching band and color guard activities, and was a national spokeswoman for the By Kids For Kids organization in the entertainment industry, where she encouraged youth to be creative and bring their imagination to life. She hopes to become a filmmaker and work for companies like Pixar, where she can take what she learns at ASU to tell stories and become an ethical leader. Her parents are proud members of the ASU Alumni Association.

Joseph Harrington is a senior at ASU who is pursuing a bachelor’s degree in engineering. His uncle is an ASU alumnus who inspired Harrington to make a difference in the community through his dedication to the university and his support of its programs. Harrington graduated with a 4.0 GPA from the Seton Catholic Preparatory High School in Chandler, where he was a member of the National Honor Society and the captain of his varsity football and basketball teams. He is a student at Barrett, the Honors College at ASU, and he contributes to the community as an officer of the American Society of Civil Engineers, the Institute of Transportation Engineers and as a member of the national civil engineering honor society, Chi Epsilon. Harrington has a passion for assisting others and is currently an undergraduate teaching assistant, with a goal to complete a doctoral degree and become a professor of engineering at ASU one day. Like his uncle, Harrington hopes to inspire others through his dedication to the ASU community as an alumnus.

Rori Leaverton is planning to major in kinesiology at ASU. Her cousin, Raquel Leaverton, inspired her to attend ASU. Leaverton maintained a 3.7 GPA at Skagway High School in Skagway, Alaska, was the salutatorian of her class, and a participant in many of her school’s extracurricular athletic programs including basketball, cross country, track and field, and volleyball. She was the captain of each of her athletic teams, in addition to being a member of a regional academic team and the student body president of her high school during her senior year.  Leaverton believes that her hard work and dedication will carry her as both a student at ASU and an alumna.

Claudia Nunez-Eddy will be pursuing a bachelor’s degree in biology and society at ASU. Nunez-Eddy’s mother is a proud ASU alumna who had her daughter cheering on the Sun Devils and, in her words, “swathed in maroon and gold” since she was a child. Nunez-Eddy graduated from the Chandler Preparatory Academy in Chandler in 2012, where she participated in extracurricular activities like varsity soccer and varsity volleyball, and where she mentored her fellow preparatory students. Nunez-Eddy also has volunteered at Phoenix Children’s Hospital, and she hopes ASU will help her to develop intellectually and pursue her academic goals so that she may attend medical school one day. While at ASU she hopes to be involved in philanthropy and be able to attend the many school events that ASU offers.

Stevi Rex is planning to major in journalism at ASU. She attended Moorpark High School in Moorpark, Calif., and graduated with a 3.85 GPA. While in high school, she was involved in multiple extracurricular activities from sports to charity work. Rex spent most of her time with local high school baseball teams where she was a statistician, due to her deep understanding and appreciation for the game. She also volunteered with youth programs like See-Me-Read, where she assisted children with their school activities. She is interested in attending ASU and studying journalism in order to learn how to share her knowledge and passion for baseball with the world. Rex aspires to become a female sports commentator one day. Her mother is a proud ASU alumna.

In order to be selected, Legacy Scholarship recipients had to demonstrate evidence of academic success, a strong commitment to community service and/or university involvement, and dedication to the achievement of their personal and educational goals. As part of the university’s commitment to promoting access to education, the association distributed half of this year’s awards on the basis of financial need.

“This cohort of Legacy scholars are accomplished students, who also have given generously to the community around them,” she said. “They are living proof that their relatives have done a great job of passing along values they learned at ASU.”

For more information on the Legacy Scholarship program and other awards and scholarships offered by the Alumni Association, visit http://alumni.asu.edu/services/student-scholarships/legacy-scholarship.

The ASU Alumni Association recently announced a new name for its travel program – ASU Travel & Tours – along with an expanded list of travel itineraries for 2013.

The ASU Alumni Association recently announced a new name for its travel program – ASU Travel & Tours – along with an expanded list of travel itineraries for 2013.

ASU Travel & Tours, formerly known as Sun Devil Destinations, allows members of the Alumni Association an opportunity to continue their pursuit of lifelong learning as they travel to locations across the country and around the globe with other Sun Devils. The association has revamped its travel schedule and worked with tour operators to enable members to learn, discover and explore on trips that inform as well as entertain. 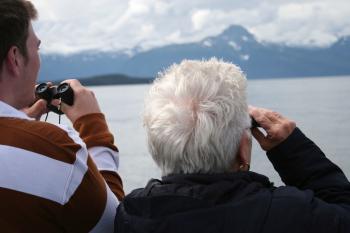 The upgraded program will feature a varied portfolio of trip itineraries, with travel programs suited to alumni representing a broad range of ages and life experiences. There will be trips aimed at young alumni, families, travelers seeking a luxury cruise experience, those wanting to learn more about the culture and history of a region, and those wanting to be immersed in the culture of a destination for an extended period. A special highlight during 2013 will be the program’s first sponsored trip, a cruise to Alaska from July 26 to Aug. 2, which will be hosted by ASU Alumni Association President Christine K. Wilkinson.

“We enhanced and renamed ASU Travel & Tours to ensure that our members are able to learn more about a destination’s culture and history on trips that we sponsor,” she said. “Our program offers travelers many exciting and enriching ways to stay connected to Arizona State University and to each other while they learn about another part of the United States or the world.”

ASU Travel & Tours has confirmed dates and tour operators for the following trips in 2013: