Teams advance to semi-finals for chance to win prize money

And then there were four. In the late hours of Tuesday evening, in the Memorial Union, two more teams advanced to the semi-finals of the Academic Bowl: the College of Liberal Arts and Sciences Gold team and the W. P. Carey School of Business team.

Having prevailed through a dramatic series of preliminary matches (detailed below), these two teams will join the College of Liberal Arts and Sciences Maroon team and the Ira A. Fulton Schools of Engineering Gold team, Thursday night, on the Downtown Phoenix campus, to battle their way to the championship round. 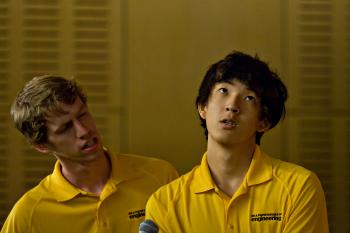 May the best college win.

(See how your skills stack up with some questions listed at the bottom that the teams missed.)

In the first match of the night, the Walter Cronkite School of Journalism and Mass Communication Gold team faced off against the College of Liberal Arts and Sciences (CLAS) Gold team – a serious threat in this sixth annual ASU Academic Bowl. Returning champions, the CLAS Gold team is an exact replica of last year's team, and they wasted no time getting reoriented with the game on the quiz show stage.

Racking up a staggering 310 points before Cronkite Gold could even buzz in for a toss-up question, CLAS Gold showed their academic prowess for all things historical, philosophical, mathematical, scientific and political. By match's end, CLAS Gold had managed to answer 90 percent of the questions and nearly all of them correctly. The final score was 365-5.

"We feel we have a healthy chance," said Ana Ordonez, after her team politely demolished Cronkite Gold. "We definitely have some good games ahead of us."

The Ira A. Fulton Schools of Engineering Maroon team got off to an A+ start in their matchup against the University College team with their knowledge of British monarchs, Shakespeare, American songs and hymns, and world capitals, among other subjects. In the end, the engineers triumphed over University College with a whopping 270 points to 20 points.

After a quick pep talk and what appeared to be a group hug, CLAS Gold returned to the stage with confidence to compete against the Engineering Maroon team, the victors of the previous match. In typical fashion, CLAS Gold won the first 100 points, silencing its opponent. The team answered nearly everything thrown at them – from the Pythagorean theorem to Toni Morrison – forcing the ever-witty Jennings-Roggensack to begin to sound like a broken record: "That is correct."

After winning their first match of the night, Cronkite Gold faced off against the Ira A. Fulton Schools of Engineering Maroon team for what they hoped would be their second win. But Engineering Maroon would not give up that easy. The two teams battled it out in what was an extremely close competition, as both teams went point for point, flexing some serious academic muscle. WIth a dramatic tie score of 140-140 with less than five minutes to go in the match, Engineering Maroon pulled ahead only to beat Cronkite Gold by 20 points. The final score was so close – 160-140 – that it needed to be verified by the judges.

In the match that would determine the third team to advance to the semi-finals, the Ira A. Fulton Schools of Engineering Maroon team fought hard against the almighty CLAS Gold team. From chemical alitropes to African nations, Engineering Maroon won a series of well-deserved points for toss-ups while staying hot on the trail of CLAS Gold. With a score of 215-190 favoring CLAS Gold, a wave of worry passed over the CLAS Gold team as a confident Engineering team successfully answered question after question. When the buzzer rang, the final score was 235-200. CLAS Gold had hung onto their perfect record by a thread. They are headed to the semi-finals.

The team from the W. P. Carey School of Business and the Maroon team from the Walter Cronkite School of Journalism and Mass Communication competed in the first match of the second opening round of the night.

The Business team was first to come alive on the scoreboard, but Cronkite Maroon soon caught up as both teams went neck-and-neck during the first half. Breaking away from Cronkite Maroon to stack up 50-plus points, the Business School gained a healthy lead. Cronkite managed to catch up, but not enough to defeat the businessmen. W. P. Carey won the match with a final score of 140-100.

And, much to the amazement of the audience, the players and the moderator, the New College team pulled ahead to beat Public Programs by a mere 5 points. It all came down to the last question, which Public Programs was lucky to have won.

Still reeling from their unexpected win, the New College team faced the W. P. Carey team in the third match of the round. Hollywood film trivia bumped the New College ahead by 30 points, while the Business team soon followed by correctly answering bonus questions about waves. And before long, Business was leading New College by 40 points. W. P. Carey's lead deepened with questions about poets, emperors and the planet Mercury. When time was up, the W. P. Carey team had won with a final score of 215-80.

Trying to stay in the game, the Cronkite Maroon team fought hard against the College of Public Programs – a team that likes to take the lead early on, and early on they did. Questions about the Norse god Thor, television sitcoms from the 1980s and 1990s, and proteins were both answered and missed by the teams. Public Programs took the match 120-85.

New College was off to a good start, grabbing 40 points early on, as College of Public Programs picked up the pace with their knowledge of electrons. Questions about baseball, conceptual math and Frederick Douglass invited energetic responses from both teams. With their facts straight on fascist dictators, the New College team won a toss-up, which boosted them to a 70-point lead.

That lead grew narrow, however, when Public Programs rebounded with correctly answered questions about Shakespeare's "Romeo and Juliet." Both teams were nearly tied again – 120 to 110 – mere seconds before the end of the match. In what was poetic justice for Public Programs, the team astonishingly took the lead at the last minute and beat New College by 20 points with a score of 140-120.

The final matchup of the night pitted the W. P. Carey School of Business against the College of Public Programs. Although Public Programs got on the board first and maintained extreme focus, Business was more successful in winning toss-ups and carried a 70-point lead by midway of the match. Business expertise comes from, of all places, the Public Programs team and garners them 20 points – but it's not enough to catch up to the Business team. With their speedy buzzing, W. P. Carey secures a 100-point lead and wins the match 225-115.

The W. P. Carey School is the final team to advance from the opening rounds into the semi-finals.

Stay tuned for semi-final and final round action of the ASU Academic Bowl, scheduled for 7 p.m. to 9 p.m., Thursday, Oct. 6, in the Eight, Arizona PBS studio, on the Downtown Phoenix campus.

Missed questions – see if you can get them:

Name the title of the play by Lorraine Hansberry about an African-American family moving to an all white neighborhood.

Name the title of the novel by V.S. Naipaul about a Trinidadian seeking a house.

What song by The Who contains these lyrics:  "I'll tip my hat to the new constitution / Take a bow for the new revolution … "

Who wrote "The Rhyme of the Ancient Mariner" and collaborated with William Wordsworth on a 1791 text? What was the name of that text?

At the Crypto Rally, Oct. 8, students from the School of Mathematical and Statistical Sciences will be challenged to solve a series of ciphers – words turned into a secret code.

Didn’t you hear me? I said “XEVRBETYPSLNECM.” 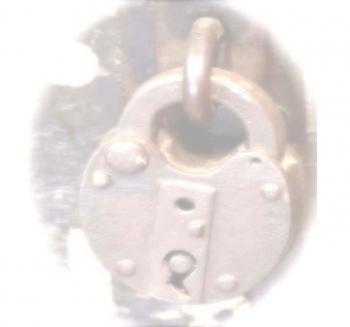 What the heck does this mean?

You’ll have to find a cryptologist to find out.

And where can you find a cryptologist in Tempe? At the Crypto Rally, Oct. 8, of course.

On that day, students from the School of Mathematical and Statistical Sciences, and any other students who are interested, will be challenged to solve a series of ciphers – words turned into a secret code such as “XEVRBETYPSLNECM.”

The rally begins at 10 a.m. at the School of Mathematic and Statistical Science on Arizona State University’s Tempe campus. Students in teams of two will be given a cipher to solve, which will lead to yet another cipher hidden on campus, and then to yet another.

The first team to arrive at the final destination will win a prize, and then, at 3 p.m., all the participants will enjoy pizza and browse industry information on careers in cryptography.

The event is being sponsored by Apriva, a secure mobile communications company based in Scottsdale. Apriva will donate $500 for Sun Devil Bookstore gift cards for textbooks to the first three teams to finish.

The event is directed by Nancy Childress, professor of mathematics, who teaches cryptography and has run a crypto rally with her class for the past two years. She decided this year to make it a university-wide event.

The rally will use five types of ciphers: Shift, Affine, Vigenère, Playfair and Hill. (For examples, go to http://math.asu.edu/~nc/monthlycipher.html.)

Cryptology, the technology of making and breaking codes and ciphers, is an important field of study today, according to Childress. “Cryptology applies anytime one is concerned with information security, whether the information is personal, financial, proprietary, or defense-related.”

Computer security, obviously, is an extremely important field, but cryptologists also work for the CIA, NSA, and other spy agencies. And, numerous other businesses require cryptography, such as cable TV companies, who encode their signals, forcing the viewer to rent their decoding devices in order to turn the signals back into a television picture. Banks also employ cryptography in order to protect the privacy and integrity of their transactions, according to a Duke University Website.

So does one have to be a mathematical wizard to learn cryptography?

Not necessarily, Childress said. “Creativity and good reasoning skills are a must. And one definitely needs to learn the math! The math involved is interesting in its own right – there is a significant amount of current mathematical research related to cryptography.”

And now, back to “XEVRBETYPSLNECM.”

It is a Vigenère cipher that means “Gene Kelly’s Dance.”