It has long been known that birds and many other animals including turtles, salamanders and lobsters, use the Earth’s magnetic field to navigate, but the nature of their global positioning systems (GPS) has not been completely understood.

One school of thought hypothesizes that birds use magnetically-sensitive chemical reactions initiated by light (called chemical magnetoreception) to orient themselves, but no chemical reaction in the laboratory, until now, has been shown to respond to magnetic fields as weak as the Earth’s.

Scientists from Arizona State University and the University of Oxford, whose work appears in the April 30 advanced online publication of the journal Nature, have synthesized and studied a sophisticated molecule that, under illumination, is sensitive to both the magnitude and the direction of magnetic fields as tiny as the Earth’s, which is, on average, one-twenty thousandth as strong as a refrigerator magnet.

ASU’s Devens Gust, professor of chemistry and biochemistry in the College of Liberal Arts and Sciences, states that “although the chemical magnetoreception mechanism for avian magnetic navigation has been discussed by many investigators, our research provides the first proof that this mechanism can actually function with magnetic fields as small as those of the Earth.”

Gust, who also is a faculty researcher in the Center for Bioenergy and Photosynthesis at ASU, says “the design, synthesis and a few initial magnetic field effect studies were done at ASU in the context of artificial photosynthetic solar energy conversion. The Oxford group, led by Peter Hore, professor of chemistry, realized that these effects might be relevant to chemical magnetoreception, constructed the extremely sensitive apparatus needed to observe the phenomena, and carried out the appropriate experiments.”

Ten years ago, a National Science Foundation-sponsored research team at Arizona State led by Gust, Thomas Moore and Ana Moore, professors of chemistry and biochemistry, synthesized a molecular “triad” and demonstrated that when the triad was exposed to light, it formed a short-lived, high-energy charge-separated species whose lifetime was influenced by magnetic fields.

The special molecules were originally synthesized as artificial photosynthetic reaction centers, being developed as chemical solar energy conversion systems. They were inspired by the way plants harvest sunlight, and had nothing whatsoever to do with bird navigation.

A related triad molecule was recently synthesized by Paul Liddell, assistant research professional working with Gust and the Moores, and studied by Hore and coworkers at the University of Oxford. The British researchers used lasers that sent out pulses of light lasting only one-thousand millionth’s of a second to investigate the molecular properties. A major problem was to completely shield their experiments from the Earth’s magnetic field.

The wonder molecule comprises three units (a carotene-porphyrin-fullerene triad). When excited by light, the triad molecule forms a charge-separated state with the negative charge on the soccer-ball-like fullerene (or buckyball) portion and the positive charge on the rod-like carotene portion. The lifetime of the charge-separated species before it returns to the normal state is sensitive to the magnitude and direction of a weak magnetic field, similar to that of the Earth. The triad molecule, in its charge separated state, could be thought of as having little bar magnets at either end – so far apart that they interact with each other only weakly.

“These results provide a clear proof of principle that the magnetic compass sense of migratory birds is based on a magnetically-sensitive chemical reaction whose product yields and/or rate depend on the orientations of the molecules involved with respect to the geomagnetic field,” adds Hore.

Gust also notes that understanding animal navigation systems is of great ecological importance because weak, man-made magnetic fields are produced by many widely-used technologies, such as power lines and communications equipment. In fact, this also allows for a diagnostic test of the magnetoreceptor mechanism, he says. Research has shown that both broadband radio noise (0.1-10.0 MHz) and constant frequency (7MHz) signals disrupted magnetic orientation in European robins.

“Of course,” Gust adds, “this research does not prove that birds actually use this mechanism, only that they could. But, there is a large body of research on birds that is consistent with the magnetoreception idea.”

The international research team is busily designing new molecules and experiments to further prove their case. This work has demonstrated that the ingenious chemical magnetoreception concept is indeed feasible. It certainly provides some insight into the structure and dynamic design features needed for a molecular interpretation of how the birds go about keeping their appointments in strange places across the world.

Who
The ASU Herberger College School of Music, in conjunction with AZ Piano, is conducting a sale of pianos currently on loan to ASU.

What
A contract with AZ Piano enables the ASU Herberger College School of Music to purchase much needed pianos with proceeds from a piano sale. This is a great way to save money on a quality piano while supporting the School of Music. AZ Piano also is working with the school to ensure prices are discounted below low in-store prices. All pianos carry full warranties. Beginning May 10, ASU community members may call 480.727.6770 for a preview appointment and selection is May 15–16. Pianos are on sale to the general public May 17–18. 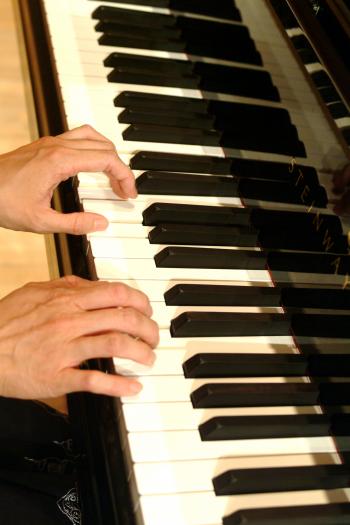 The School of Music in the Herberger Institute for Design and the Arts at Arizona State University is ranked 19th in the country and eighth among public institutions byU.S.News & World Report. More than 100 music faculty artists and scholars work with approximately 800 music majors each year in research, performance and scholarly activities. It presents approximately 700 concerts and recitals each year. To learn more about the School of Music, visit music.asu.edu.