Arizona State University has notified Tau Kappa Epsilon (TKE) that its recognition as a fraternity chapter at ASU has been permanently revoked. This action has been taken after TKE was placed on probation in 2012. TKE was suspended Jan. 20, 2014 for hosting an unregistered, off-campus event Jan. 19, 2014 that encouraged a racially-insensitive theme and created an environment conducive to underage consumption of alcohol.

ASU is continuing to investigate the actions of individual fraternity members and other students who may have attended the party under the ASU Student Code of Conduct. Upon conclusion of that investigation, ASU will take additional action as may be appropriate under ASU and Arizona Board of Regents policies.

When students gather as part of a university recognized organization, whether it is a varsity sports team, the student newspaper, an academic club or a fraternity, students are expected to conduct themselves in a manner that reflects the core values of ASU, which include respect for all people, races and cultures. The TKE party held last weekend was not held on campus and was not a sanctioned university event.

ASU has one of the most diverse student bodies of any major university in the country, and it is unfortunate that a few individuals held an offensive party at a time when ASU, the state and the nation were celebrating Dr. King’s achievements and legacy.

ASU has a long history of honoring Martin Luther King, Jr. For 27 years, the university has hosted an MLK Breakfast. This year, the theme was Unite Beyond the Divide. The annual event, held Jan. 23, 2014, drew more than 300 university and community leaders. This year, the event recognized Victory Together and a student leader. In addition, the university has held the annual March on West for the past 23 years. The event features a re-enactment of King's "I Have a Dream" speech, where hundreds of local middle-school students attend and learn about the Civil Rights movement.

ASU University Libraries last week made available through the ASU Library Repository an unknown recording of Martin Luther King, Jr. speaking at ASU in 1964, less than a month before the landmark Civil Rights Act was signed. The speech was played for the public for the first time at ASU's MLK breakfast celebration on ASU’s Downtown Phoenix campus, as part of the university’s MLK celebration. University Libraries worked with a representative of The King Center in Atlanta to make the speech available to the public.

• 5-308 F-15 Violation of the Board or university rules or applicable laws governing alcohol, including consumption, distribution, unauthorized sale, or possession of alcoholic beverages

• 5-308 F-21 Engaging in discriminatory activities, including harassment and retaliation, as prohibited by applicable law or university policy

ASU alum Bobbi Bartolomeo may work most days from her home in Ahwatukee, Ariz., but this women's studies and psychology graduate is contributing to a corporate culture respectful of employees within Jones Lang LaSalle and its client firms.

As West regional operations manager with the global real estate and investment management firm Jones Lang LaSalle, Bobbi Bartolomeo works mostly from her home office in Ahwatukee, Ariz., and spends her days connecting virtually with colleagues and clients on the Bank of America account – in Southern California, the Pacific Northwest, Nevada and Arizona. But Bartolomeo also enjoys a high level of connectivity that has been strengthened by a formal Women’s Network within Jones Lang LaSalle, which she’s played a part in growing.

“In addition to the corporate-level forum, each account has its own chapter,” she explains, “and I helped jump start the women’s forum for Bank of America.” 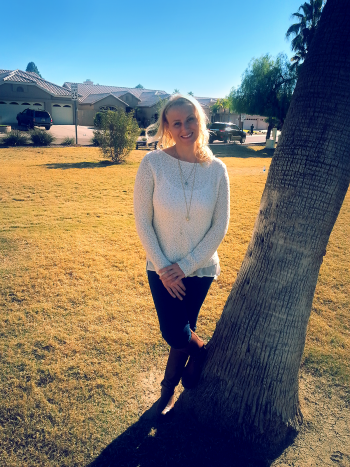 Bartolomeo puts together the group’s monthly and quarterly sessions – which usually take the form of live web meetings, often with a tele-presence at one of the bank locations.

“People can choose to see each other on-screen or listen in on a conference line,” she says, “and a Sharepoint website is used to initiate leads for agenda topics or to suggest presenters.”

The agenda for each forum is targeted to issues of interest to women in the organization and might attract anywhere from 50 to several hundred participants. Examples of recent speakers include a local architect who owns her own business, a health professional addressing a women’s medical issue and an expert on women’s fashion in the workplace and how it can affect perception.

“The forums open up dialogue on a broad array of topics,” continues Bartolomeo. “You get a big picture of other women’s roles in the company, as well as extending your contacts. Through the forum, I now have colleagues I know I can reach out to in Chicago, where Jones Lang LaSalle is headquartered.“

While often informational, the forums are also a place where women can just let go, she says: “Not necessarily a venting session, but a relaxed, comfortable environment where you can just be honest and say, ‘I had this experience and it didn’t turn out so well, but here’s what happened,’ whether it be rejection for a promotion or an issue with a colleague or client.”

The initiative has received nice recognition within the company, Bartolomeo notes, and has led to the formation of other diversity and inclusion groups.

“The women’s forum was one of the first within the Bank of America Account – now there are LGBT forums, Latino forums ... it’s been really rewarding work,” she emphasizes. “Jones LaSalle has been named one of the World’s Most Ethical Companies for six years in a row, and the forums are demonstrative of the respect the company has for employees and the communities in which we operate.”

Like many School of Social Transformation majors, Bartolomeo decided to pick up a second major after taking an introductory course in the school. The psychology major’s interest in the field of women's studies was ignited in Michelle McGibbney Vlahoulis’s section of “Women, Gender and Society.” After graduating from ASU in spring of 2006 with dual majors in women and gender studies and psychology, she started an MBA at the University of Phoenix the next fall and completed it in fall 2008, focusing her electives on project management.

“Of all my college coursework, it’s still the women’s studies courses that stand out, and where I can remember every professor,” she reflects. “In Mary Rothschild’s utopian course we had to interview people in different types of communities,” Bartolomeo says. “I did a five-hour interview with Carolyn Jessop, formerly of the Colorado City polygamist community. I’ve ended up staying in touch with her and the work that she does.

“Women and gender studies is very much an integral part of not only my work, but who I am today.”

The School of Social Transformation is an academic unit of the College of Liberal Arts and Sciences.