His “tactile photographs,” printed on special heat-sensitive paper, are portraits made with raised grooves and contours that enable someone with a visual impairment to get a general idea of the details of an individual’s face by touching the images. 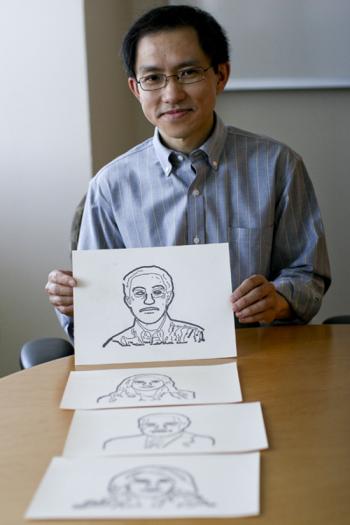 Li is an associate professor in the School of Computing, Informatics and Decision Systems Engineering, one of ASU’s Ira A. Fulton Schools of Engineering. He came up with the idea for the tactile photographs when he began working with a coworker who is blind.

“I thought that this technology could be useful to workers with visual impairments who might want to get to know the people in their offices a little better,” he says.

With his coworker in mind, Li developed computer software capable of automatically creating a simplification of a printed image such as a photograph, or even a simple webcam image. The software extracts basic facial features, contours and outlines to create the image.

Surveys of individuals with blindness were conducted to find out what contours were most effective and which were distracting or confusing when people touched them.

Aside from the practical benefits of producing tactile photographs, they have become an artistic pursuit for Li. Earlier this year he teamed up with photographer Kristel Puente from San Antonio, Texas when he was asked to create 11 tactile photographs for an art show at the ZaZa Garden Gallery in San Antonio.

The show, titled “Color of the Blind,” was an interactive exhibit focused on providing artistic engagement for people who are blind or visually impaired.

The tactile images that Li created and Puente photographed were featured along with works by 40 local San Antonio artists who crafted various kinds of images meant to be felt and heard, and even smelled and tasted. A portion of the proceeds from art sales at the show benefitted the National Federation of the Blind.

“It was the first time that many of the people who attended had ever experienced photographs like this,” Li says. “Nobody else has attempted this kind of project and many people didn’t know it was possible to make such images until they experienced it at the art show, and they loved it.”

The tactile photographs included portraits of some of the artists participating in the show, along with portraits of the mayor of San Antonio and a prominent local newscaster – people whom many of those attending the show had heard, or voted for, but never actually seen.

“In the beginning of my research I found myself interested primarily in the technology involved, but after seeing the first participant touch one of these photographs I became very inspired,” Li says.

He is now considering other applications of the tactile-photography technique, including tactile floor maps that make it easier for people with visual impairments to navigate places such as shopping centers.

He’s also interested in developing a system that might allow those who are blind to print a tactile “picture,” perhaps from Facebook. “The software makes the process simple and automatic, it’s just a matter of making the printing technology more affordable,” says Li. He thinks that might happen as use of the technology becomes more widespread.

Li’s research in this area has been aided by ASU computer science students, including Yilin Wang, who is pursuing a master’s degree, Xu Zhou, who is pursuing a doctoral degree, and recent graduates Jessie Wang, Nan Li and Jesus Yariar.

Student-athlete Cory Hahn, who was paralyzed from the chest down sliding into second base his first weekend at Arizona State in 2011, has been honored for his efforts and determination.

A highly touted high school baseball player, Arizona State University student-athlete Cory Hahn was paralyzed from the chest down sliding into second base his first weekend at Arizona State in 2011. Through tireless effort and dedication, Cory has been working his way toward his ultimate goal of walking again. 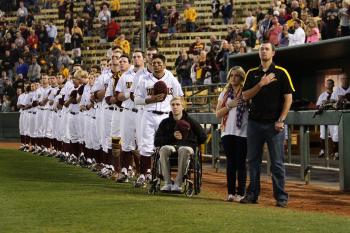 The Arizona Diamondbacks selected Hahn in the 34th round of the 2013 Major League Draft and are interesting in employing him within the organization in some capacity.

The National Association of Academic Advisors for Athletics presented Hahn with the Wilma Rudolph Student Athlete Achievement Award. It is given annually to student athletes who have overcome great personal, academic and/or emotional odds to achieve academic success while participating in intercollegiate athletics.

Cory was one of five student-athletes to earn the award this year and joins a prestigious group of former winners, including former Rutgers football player Eric LaGrand.