Symposium to tackle questions of reliable news in a digital world

In a digital world where everyone can create media, what – and who – can we trust for reliable news and information?

Leading media figures from the United States, United Kingdom and Ireland will tackle this question, and more, in a one-day symposium Sept. 16 at Dublin City University (DCU). The symposium is being hosted by DCU and Arizona State University in association with the New America Foundation. Information is available at: http://www.mediaconferencedcu.com/. 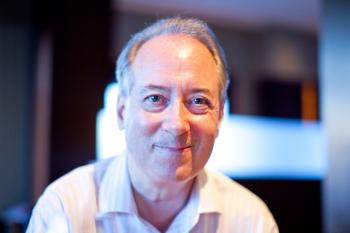 “The goal is to get people thinking harder about the opportunities and nuances that arise when we do news in a digital age,” said Dan Gillmor, founding director of the Knight Center for Digital Media Entrepreneurship at ASU’s Walter Cronkite School of Journalism and Mass Communication. Gillmor is co-convener of the event with DCU’s Kevin Rafter, senior lecturer in political communication and journalism, and associate dean for research and former political journalist.

ASU and DCU struck up a strategic alliance as global partners in 2006 based on their shared values of innovation and entrepreneurship, technology-enhanced learning and knowledge enterprise development, as well as research and discovery that benefit the public good. ASU President Michael M. Crow said teaming up with a select group of global partners, such as DCU and Mexico’s Tecnológico de Monterrey, has been an important step in engaging internationally.

“These universities are like-minded, with the same spirit and desire to innovate as we have at ASU,” Crow said. “They are younger institutions that are entrepreneurial, like us, as opposed to more established institutions, such as Oxford. Lots of universities sign agreements with each other, but our focus is on building comprehensive, long-term relationships.”

Crow added that DCU boasts a legacy of dynamic leadership, having a vision similar to ASU’s: “President Brian MacCraith and I work well together because we share many of the same aspirations for our institutions. It’s a synergetic partnership that benefits us both.”

The two presidents will bookend the news symposium with opening and closing remarks.

Gillmor said that using social media bears the same responsibility for journalists as they have always had on behalf of traditional media outlets.

“Social media is one of many ways for journalists to build trust,” Gillmor explained. “However, as in the past, it takes time to earn public trust, and it can be forfeited fairly quickly.”

Gillmor, author of Mediactive, said today’s abundance of information can be as confusing for journalists as it is for their audiences: “Welcome to the era of radically democratized and decentralized creation and distribution, where almost anyone can publish and find almost anything that others have published.”

During the symposium, Gillmor will lead a conversation about the need for media literacy in a world of unlimited information. He characterized the problem as a supply and demand equation.

“My goal with this session is to focus on the demand side,” he said. “If we don’t have better demand from the public for reliable information, we won’t have a better supply.”

In his book, Gillmor notes that we aren’t helpless in sorting the good from the bad information: “Many valuable tools and techniques are emerging from the same collision of technology and media that has created the confusion. And don’t forget the most important tools of all – your brain and curiosity.”

Other sessions during the Dublin symposium will ask what is wrong with a partisan media, moderated by Karlin Lillington of The Irish Times, and how social media impacts our democracy, led by Jane Suiter of DCU’s School of Communications.

Other moderators and speakers participating in the symposium include the following:

This fall, Arizona State University welcomes a freshman class that sets new records on many levels.

Arizona State University is welcoming an academically strong and remarkably diverse freshman class that includes many students who have distinguished themselves both inside and outside the classroom.

The new class of Sun Devils rises from the largest pool of freshman applicants in the university’s history, and among its ranks are a 16-year-old with four associate’s degrees, a retired Marine Corps sergeant, a first-generation college student from the top of her high school class, and twin sisters who perform with the Thailand Youth Orchestra.

“The more than 46,000 applications we received from aspiring freshman is a testament to ASU’s reputation as a premier university, and the quality of the students who are joining our community of higher learning signals great things for ASU’s future,” said Provost Robert Page.

The number of students applying for admission as first-time freshmen represented a 25 percent increase over the previous academic year. The Fall 2014 freshman class is an academically strong group, with an average high school GPA 3.4 and average SAT score of 1113. More than half, 54 percent, are New American University Scholars at the Dean, Provost and President Scholarship levels, the most prestigious scholarships for first-time freshmen.

Kevin Davies, from Kingman, is a College of Liberal Arts and Sciences Dean’s Scholar. A sergeant in the Marine Corp infantry who served in the Middle East and Asia, he is a psychology major who has his sights set on being a doctor. 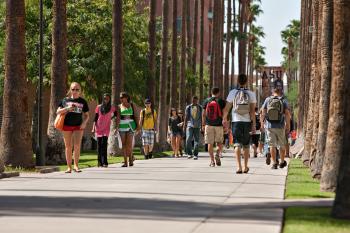 Davies said he is looking forward to “being around people again and challenging myself in a different way.”

Among this year's class are 6,236 Arizona residents – some 450 students more than last year’s in-state freshman class. 62 percent of these students graduated in the top 25 percent of their high school class.

Barrett, the Honors College celebrates a new record of 1,647 high-achieving first-time freshmen. The majority, 1,206, are Arizona residents. Among these honors students is 16-year-old Alexander (AJ) Gilman from Paradise Valley. A business and legal studies major in W. P. Carey School of Business, he enters ASU with 111 college credits and associate’s degrees in business, arts, science and general studies.

Gilman comes from a Sun Devil family and his mom has an accounting degree from W. P. Carey and a law degree from the Sandra Day O’Connor College of Law. Hoping to follow in his mother’s foot steps, with his eyes set on law school, he chose Barrett “because it offered an individualized experience and a feeling of community,” which is important to him.

ASU continues to honor its longstanding commitment to socioeconomic diversity and access to education with more than 42 percent of enrolled Arizona residents reporting they will be the first in their family to go to a four-year college, and 39 percent coming from low-income families.

Sarah Rutkowski, from Chandler, is a first-generation college student who was awarded an APS scholarship. Also a first-generation immigrant whose parents came from Poland, Rutkowski overcame a challenging childhood and graduated in the top 4 percent of her class from Corona High School.

A record number of non-resident students also have made ASU their school of choice. 4,399 students representing all 50 states and 63 countries are members of this year’s class with the largest number – 1,173 – coming from California. ASU has increasingly becoming a school of choice for students from the Golden State.

Collectively, this year’s freshmen make up ASU's most diverse class to date, in terms of their racial and ethnic backgrounds - 39.4 percent of the class.

Xochil Rina Goretsky, a Yaqui-Chicano-Jewish American from Mendocino, Calif., is a Barrett Honors student majoring in public health at the College of Health Solutions on the Downtown Phoenix campus. Her path to college has been a personal challenge after suffering a severe concussion in junior high school. She had to re-learn how to read, among other things, and said what kept her going was a desire to change the world.

After being accepted to ASU, the University of Arizona and Drexel University she chose ASU. “I felt ASU said, ‘We believe in you and are willing to invest in you because we know you are going to put in 110 percent,” said Goretsky. “I want to explore and I think this is the place to do it.”

More than 900 new international students will call ASU and the Phoenix-area home. Twin sisters Rittika and Ruchika Gambhir made a long journey from Bangkok, Thailand to attend ASU, and it was their only choice due to the “dedicated faculty,” “diversity of culture,” and “amazing atmosphere.”

Many incoming freshmen have selected ASU due to the variety of academic environments it provides students across its five Arizona locations. Students choose from more than 300 academic majors and select the campus environment that is best fit for their academic, social and cultural needs. Students seeking a small campus experience with big university are part of the West campus environment with 385 new freshmen, the Polytechnic Campus with 579 new freshmen, or the ASU Colleges at Lake Havasu City with 33 new freshmen.

In addition, the Downtown Phoenix campus will welcome 1,318 new freshmen and Tempe Campus will be home for 8,320 first-time freshmen.

“No other university in the United States offers students these types of educational and campus environment experiences under one university name,” said Kent Hopkins, vice provost for enrollment services. “There is no place quite like Arizona State.”