Creating a tradition of Sun Devil spirit isn’t just about showing up at football games. While that is part of it, Sun Devil spirit doesn’t take a weekend off when the team heads to Missouri.

There will be rooms filled with Sun Devil fans, cheering on our glorious football team as they take down these tigers with a few tranquilizers. You know that every sporting event is made better when you’re watching it with other loyal fans cheering along when your team is victorious. In this case, that’s the Devils.

Plus, you can win free stuff and what can be better than that?! Oh wait, I know what’s better. Free food! Because that will be there too, which means you have no reason to stay home.  Depending on which campus you watch the game on, you could win: piggy banks, shirts, fold out chairs, and much more!

Be a good Sun Devil fan. Come to the viewing parties. Enjoy yourself some free food and possibly win a thing or two. Who knows, you could even make a new friend who shares the same passion for Sun Devil athletics as you do. That would be terrible wouldn’t it? Not.

A humanities learning project aims to bring Spanish speaking students from all over the world together in conversation.

Conceptualized by Andrew Ross, head of Learning Support Services in ASU's School of International Letters and Cultures in the College of Liberal Arts and Sciences, and Stephane Charitos, director of the Language Resource Center at Columbia University in the City of New York, as a way to bring Spanish speaking students from various countries of origin and in different cities together in conversation, a humanities learning project, titled “Hispanidades/Hispanicities,” successfully launched in Fall 2011.

According to a recent Pew Hispanic Center study, while most Hispanics in the United States prefer terms such as "Mexican" or "Cuban" or "Dominican" rather than pan-ethnic terms, the one thing they do have in common is "a strong, shared connection to the Spanish language. More than 82 percent of Latino adults say they speak Spanish, and nearly all – 95 percent – say it is important for future generations to continue to do so." 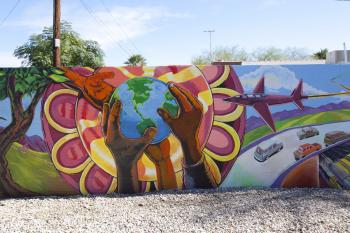 The collaboration between ASU and Columbia brings together students in a Spanish for bilinguals and heritage learners course from each university. They use an online platform and other tools to create, share and discuss information collected in Hispanic barrios across Arizona and in New York City. The students use combined ethnographic research and digital storytelling techniques to explore their own Hispanic identities and the Hispanic identities of Spanish language speaking students in other parts of the United States.

The project continues this year as students enrolled in Spanish 316 at ASU and Spanish for Bilinguals at Columbia University are asked to pick an aspect of local or regional Hispanic identity, such as murals, bodegas, neighborhoods or sports, and report on it.

“The classes overlap like a Venn diagram,” Ross explains, “with students doing their own class work as well as ethnographic field work out in the community in collaboration with their partners at Columbia. The work of each course encourages students to reconnect with local Hispanic heritage and culture, and to explore what it means to be Hispanic in different geographic regions of the United States.”

“[The work ranges from] simple observations of the communities studied to profound reflections of the shared cultural, linguistic, sociopolitical and historical experiences between distinct regions of the United States,” says Ross. Students collect photographs, videos, stories and interviews throughout the semester, creating a cumulative digital history of their barrios that can be shared with their classmates, their online pen pals, and eventually the general public.

One ASU student in the first cohort of Hispanidades/Hispanicities produced a digital story exploring mural art in South Tucson from a historical and thematic perspective. The student combined his photographs, narration, and music to deliver a compelling look at how this art form is used in la Tusa (slang for Tucson), and what it means to the community there.