Back in April, Sun Devil Athletics announced its intent to restore the tradition of Sun Devil Football at Camp Tontozona. By the end of May the campaign was announced a success and from Aug. 14-18, head coach Todd Graham and the rest of the team called the famed mountain retreat near Payson, Ariz., home.

Now, the school is bringing back the custom of ringing the Victory Bell, a tradition that dates back to the 1930s. 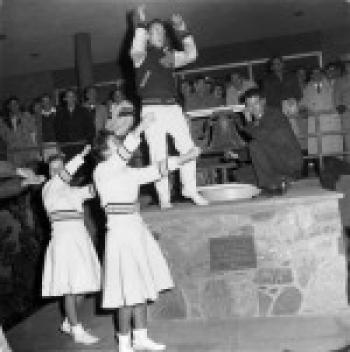 "I just love the pageantry of college football," head coach Todd Graham says. "The tradition, the customs - all of it helps enhance the experience for student-athletes, coaches, staff, fans, supporters and alumni."

The original bell began at Arizona State Teachers College in the late 1930s as a dinner bell that hung in the dining hall and summoned students to meals. Shortly after, however, the bell started being sounded for athletic victories, thus becoming the Victory Bell.

Ringing the bell called students and fans to the stadium before each football game, and commemorated each win - the number of rings equaled the number of points scored by the Sun Devils.

However, in 1956, Senator Carl Hayden donated a piece of sandstone from the original White House, and as part of the christening ceremony for the opening of the Memorial Union, the bell was installed on this pedestal and given a place of honor on the west patio. The bell was removed some time in the 1970s when the Memorial Union was remodeled and disappeared from the Tempe campus.

The ASU Undergraduate Student Government purchased the new Victory Bell as a gift to the students, student-athletes, alumni, and supporters of Arizona State University. Cast in 1941 by the 19th century Meneely Bell Foundry, and 18.75 inches in diameter and 150 pounds, this bell closely resembles the original in both size and model.

It is mounted on a custom Maroon and Gold wagon, and is portable and will be present at all sporting venues to ring in victories.

A Victory Bell Honor Guard, which will be made up primarily of ROTC students, is also being established to accompany the bell when in public and at Sun Devil Athletics events.

Dates are being discussed to use the bell to call students to dinner at the dining halls as a way to welcome the Victory Bell back to campus life and recreate the tradition of the original bell transitioning from dinner bell to Victory Bell. Details on how the bell will be utilized following Sun Devil victories are also being considered.

The Victory Bell that is currently outside the Southeast Entrance at Sun Devil Stadium was a gift to ASU students from Judge Ross F. Jones in the late 1960s. It was intended to replace the original, smaller bell, but was too large to transport and eventually developed a crack in it that does not allow it to ring anymore.

About the Victory Bell at the Southeast Entrance:
It weighs more than 2,000 pounds and is believed to have come from Michigan around 1879 on a freight shipment to Winslow via the Santa Fe Railway.

It was Senior Day for Arizona State and with emotions running high, the seniors came out strong and gave fans one final reminder of everything they had accomplished during their ASU careers. Thanks to offensive contributions from wide receiver Rashad Ross and running back Cameron Marshall, as well as defensive gems from safety Keelan Johnsonand linebacker Brandon Magee, ASU put the game out of reach early. 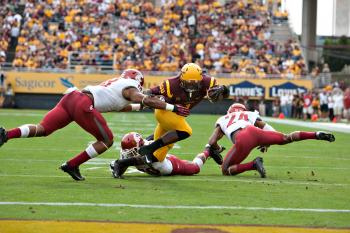 ASU spread the ball around on offense all game as quarterbacks Taylor Kelly, who went 20-for-23 for 246 yards and four touchdowns, and Michael Eubank found nine different receivers in all.

The Cougars elected to receive to start the game and the Sun Devils defense wasted no time in forcing a three-and-out. On the ensuing punt, ASU took advantage of a WSU fumble and recovered at the Cougar 6-yard line. ASU couldn't find the end zone, however, and settled for a 21-yard field goal by Jon Mora. ASU has now scored first in 10 of the team's 11 games.

After forcing another three-and-out, Kelly connected with Ross for a 15-yard touchdown. Marshall carried the ball for a successful two-point conversion to put Arizona State up, 11-0.

Not to be outdone by the seniors, the Sun Devil's younger players proved that ASU would be in good hands in 2013. After rushes by Marshall, Ross and wide receiver Richard Smith, tight end Chris Coyle continued his strong season and took the ball 18 yards into the end zone. On the first play of WSU's next drive, Cougars' quarterback Jeff Tuel tried to throw the ball long, but Johnson was waiting down field and intercepted the ball to put the Sun Devils back on offense. Despite two receptions of more than 20 yards by wide receivers Kevin Ozier and Jamal Miles, ASU failed to score and went into the second quarter leading, 18-0.

Magee sacked Tuel on WSU's first drive of the second quarter, and although ASU couldn't capitalize after Miles broke numerous tackles on the punt return, the Sun Devils scored after a 17-yard reception by Marion Grice on the very next drive. Johnson followed the touchdown with his second interception of the game off of Washington State's new quarterback, Connor Halliday. His 35-yard return set the stage for a 29-yard touchdown pass from Eubank to Coyle that put Arizona State ahead, 32-0.

WSU threatened to score with the clock winding down in the second quarter, but Halliday failed to convert on a fourth-and-four from the six-yard line and the Devils headed to the locker room with a first-half shutout.

ASU continued their dominance on offense to open the second half. After five consecutive first downs from four different players, Eubank carried the ball one yard into the end zone. After rushes by running back D.J. Foster and Grice, Kelly once again connected with Ross for a 31-yard touchdown that increased ASU's lead, 46-0.

ASU failed to score again, though they came close at the beginning of the fourth quarter. After a drive in which Marshall carried the ball 30 yards, Mora failed to convert on a 31-yard field goal attempt. With a commanding lead, ASU rested some of its starters and gave some of their seniors one last chance to play in front of the home crowd. Running backJames Morrison ended up carrying the ball 48 yards in the fourth quarter alone. Offensive lineman Kyle Johnson and wide receiver AJ Pickens were among the other seniors who saw significant playing time in the fourth quarter.

The Sun Devils defense had one of its best performances of the season despite allowing WSU scored in the last two minutes of the game to break up the shutout. They forced seven sacks and a fumble in addition to Johnson's two interceptions. They brought pressure throughout the game on the Cougars' quarterbacks, especially Halliday, who ended up completing just 13 of his 33 passes. Tuel was only 8-for-16 for 67 yards before being removed from the game. Washington State's leading rusher, Teondray Caldwell, was held to only 13 rushing yards.

The offense saw contributions from nearly every starter on the roster. Ross had 79 receiving yards and two touchdowns, while Miles, Ozier and Coyle (also with two touchdowns) all finished above 50 receiving yards. Marshall led the team with 75 rushing yards, while Foster has a 50-yard rushing performance. Besides his rushing touchdown, Eubank was 7-for-9 for 55 yards in passing and added 33 rushing yards.

ASU will close out the regular season with the Territorial Cup match against Arizona on Friday, Nov. 23, in Tucson. Kickoff is scheduled for 8 p.m. and will be broadcast on ESPN.