Michaelangelo once said that he never created sculptures; he simply chipped away at stone to reveal what was already inside.

Now two ASU students have given a millennial spin to that idea, using a digital program and robots that make it easier for artists to find what’s inside these slabs of rock. 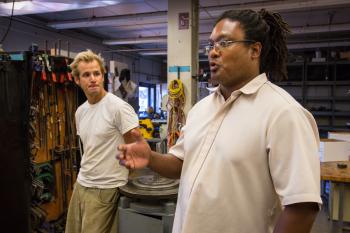 MFA graduate Eric Clausen listens as MFA student Alvin Huff talks about the Digital Stone Project in which they participated this past summer in Italy, while gathering in a sculpting lab in Tempe on Aug. 14. The project used robots to roughly sculpt digital sketches into blocks of marble. The artists still needed to do the fine precision work including sanding, polishing and buffing. Download Full Image

This past summer Eric Clausen and Alvin Huff, graduate students in the School of Art in the Herberger Institute for Design and the Arts, participated in the Digital Stone Project, an international arts initiative based in Tuscany, Italy. It’s where they engaged with several master sculptors learning the time-honored tradition of carving marble, and where a state-of-the-art robot did most of the heavy lifting — or in this instance, carving.

The project used five- and seven-axis robots wielding diamond tool bits to roughly sculpt digital sketches into blocks of marble. The artists then do the fine precision work, including sanding, polishing and buffing their 300- to 400-pound marble sculptures.

“The use of a robot allowed me to experiment in a way where I didn’t have to deal with the laws of nature if the marble got cracked or chipped,” said Huff, who is working on his master’s degree in sculpting.

He used his time in Italy to sculpt “Shelter,” an abstract piece with ornate details.

“The robot also allows your abstract mind to create any object you can think of without having to pay for the materials, mess up your clothes or rough up your hands.”

The Digital Stone Project was founded in 2005 by sculptors who wanted to create a new way of working in stone by leveraging digital technologies. The monthlong residency is held each June at the foot of the mountains of the Garfagnana region of central Italy, where marble has been quarried for more than 2,000 years. These mountains provided the stone canvas for Michaelangelo’s iconic sculpture, “David.”

“The setting was inspiring because it was outside at the foot of these mountains and inside of a tent,” said Clausen, who earned his Master of Fine Arts degree this year. “I was completely removed from all of the trappings of a big city. It was just me and a slab of marble.”

His slab contained a small face tucked away inside a pair of exaggerated ears. He called it “Noise.”

Clausen and Huff were accompanied by Mary Neubauer, an art professor the Herberger Institute, as well as staff and students from a handful of other universities.

“One of the missions of ASU is to be interdisciplinary in our approach to almost everything, and that does include the arts,” said Neubauer, who also worked on a marble piece while in Italy. “We’re well-positioned to accept new technologies while still teaching the fundamentals. Students will need to have these skills in order to be employable.”

This was Neubauer’s second trip to Italy. She spent the month working on an intricate, ribbed ring sculpture dubbed “Monsoon.”

Her piece, as well as Clausen’s and Huff’s, was on exhibit for the month of July in Villa Strozzi in Florence, Italy, not far from the home of Michaelangelo’s “David.”

Herberger Institute for Design and the Arts Arts Graduate student

To infinity and beyond: The future of space at ASU

A mission to the moon is tough to top, but Arizona State University's space program has plenty of stars in its eyes. Here's a quick look at what's ahead for the scientists in the School of Earth and Space Exploration.

To infinity and beyond: The future of space at ASU

Editor's note: Read about the history of ASU's space school — how it grew from a traditional program into an astro powerhouse — here.

A mission to the moon is tough to top, but Arizona State University’s space program has plenty of stars in its eyes. 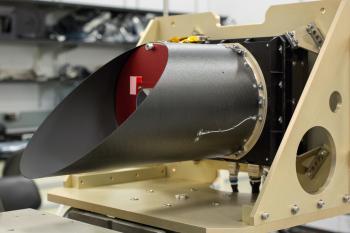 The OSIRIS-REx Thermal Emission Spectrometer (OTES) is the first space instrument built entirely on ASU’s Tempe campus. It was shipped in June to Denver, to be installed on the OSIRIS-REx spacecraft for a 2016 mission to the asteroid Bennu. Download Full Image

Peering into the alien ocean beneath one of Jupiter’s moons, mapping minerals on an asteroid for a rock-sampling mission, and building cameras for a future mission to Mars are all being worked on right now.

And there are bigger visions dancing in the minds of ASU’s space team.

Jim Bell is a professor in the School of Earth and Space Exploration, the deputy principal investigator of the LunaH-Map CubeSat mission to the moon, and director of the NewSpace Initiative at ASU.

“Our rocket ride to space for our (LunaH-Map) mission will be the first launch on the new Space Launch System,” Bell said, referring to the immense megarocket NASA is building. It will be a billion-dollar beefed-up Saturn Five capable of ferrying 77 tons of cargo and people to asteroids, the moon and eventually Mars.

In the next few years, Bell also expects to be planning and building cameras for the 2020 Mars Rover, a skill at which he is a top hand, having delivered more than 150,000 images from the Spirit and Curiosity Mars rovers.

The 2020 mission goal is to find interesting rock and soil samples that tell the history of Mars and cache them for pickup later. The 2020 mission won’t bring the caches back; a future mission will do that.

“I hope in a decade we’re talking about that future mission (to pick up the caches) actually happening,” Bell said. “In order to find out if there is or was life on Mars, it’s very difficult to make the measurements there in any convincing way. That’s why we have to bring the stuff back.”

Phil Christensen is the director of the Mars Space Flight Facility in the School of Earth and Space Exploration and a Regents' Professor of geological sciences. He is looking forward both to helping choose the spot to collect rocks and soil from an asteroid, and hunting for warm water on an icy Jovian moon.

NASA’s OSIRIS-REx mission lifts off next year. The spacecraft will travel for three years to reach an asteroid named Bennu that is the size of an Egyptian pyramid. It will touch the surface of the asteroid three times with an arm, grabbing (hopefully) up to 4 pounds of rock, then fly back to Earth and drop the sample capsule down to the Utah desert in 2023.

Christensen was the designer and instrument scientist on one of the mission’s five instruments: the OSIRIS-REx Thermal Emission Spectrometer, or OTES. It’s the first space instrument built entirely on the Arizona State University campus.

“We’re going to get up to this asteroid, and people are going to be surprised at what we find,” Christensen said.

It's not the only asteroid action at SESE. A team is looking to mitigate the risk of landing on asteroids — often appearing as piles of rubble loosely held together — by building its own "patch of asteroid" inside of a small, spinning satellite. The project is called the Asteroid Origins Satellite, or AOSAT I; Jekan Thanga, an assistant professor in SESE, and Erik Asphaug, a planetary scientist and professor at ASU, are the the engineering principal investigator and science principal investigator, respectively. A CubeSat launch is planned for January 2017.

As for Christensen, he’s envious of the scientists who sent the probe to Pluto. “That was stunningly fun,” he said. However, fun of his own is coming.

He is the lead for an instrument going along on NASA’s mission to one of Jupiter’s moons. The Europa mission — it doesn’t have an official name yet — will launch around 2022 and look for an ocean hidden beneath Europa's icy crust. The Europa Thermal Emission Imaging System (E-THEMIS) will act as a heat detector, scanning the surface of Europa at high resolution for warm spots where the ice is thin.

“Europa will be a lot of fun because we don’t know what we’re going to find,” Christensen said.

Bell has great hopes for the NewSpace Initiative, which matches ASU scientists and students with private space companies to solve problems. In a decade, he hopes such strong relationships with key players will exist that ASU will be able to devote significant resources on campus to interact with them, working on science as a sidelight in conjunction with figuring out how to deliver a payload, for instance.

Linda Elkins-Tanton, director of the School of Earth and Space Exploration, sees the school leading academic-corporate relationships in the field.

“SESE is moving toward defining a new integrated team for designing space instruments to answer leading-edge science questions about the planets and space,” she said.

“We have a unique opportunity and drive to do so, since we have the scientists and engineers working and innovating together. We’ll be at the forefront of the new university-private partnerships for space. … We’ve got an awful lot ahead of us.”