As more people move to different regions of the country, it will require planners to use as many tools as they can to develop urban areas that satisfy population demands without over-burdening the environment.

A new study from Arizona State University details some of the dynamics at play as one region of the country, the Central Valley of California, braces for substantial population growth and all it entails. The study, based on computer simulations using the ASU Advanced Computing Center, of rural to urban land conversion shows that as areas of California grow and develop, the resulting built environment could generate additional heat (called the urban heat island). 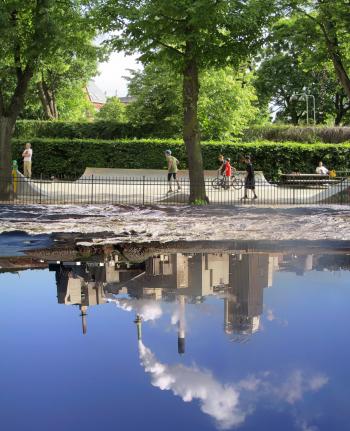 But urban heat island can be mitigated using new technologies and the latest in sustainable design techniques, said Matei Georgescu, the author of “Challenges associated with adaptation to future urban expansion,” which appears in the April 1 issue of the Journal of Climate. Finding the right combinations of technologies and techniques will be key.

“This research examines for the first time climate impacts for rapidly expanding urban areas within California exclusively due to anticipated conversion of existing landforms to the built environment, such as variable density residential dwellings and commercial infrastructure,” said Georgescu, an assistant professor in ASU’s School of Geographical Sciences and Urban Planning and author of the study.

“In addition, commonly proposed urban climate adaptation strategies are examined to assess their efficacy in mitigating urban induced warmth,” he explained. “Given that decisions about future land use change in this potentially heavily populated area have yet to be made, it is critical to understand environmental consequences of such development pathways prior to their taking place.”

Georgescu focused his study on the Central Valley area of California, a large inland area that ranges from Redding to the north to past Bakersfield to the south. The region encompasses some 22,500 square miles and currently is the country’s richest agricultural area. It also is the fastest growing region of California and is expected to add five million people by the year 2060 and millions more by 2100.

Georgescu used ensemble-based simulations employing EPA projections of urban growth to assess urban expansion climate effects by the year 2100 in the Central Valley. He first assessed the resulting rise in regional temperatures (expected to be 1 to 2 degrees C, or 2 to 4 F) and then explored several temperature mitigating strategies (cool roofs, green roofs and hybrid approaches) for buildings. He then assessed the environmental impact of the different strategies.

“The focus of the study was on those regions of California projected to undergo the greatest conversion to urban land use and covers,” said Georgescu, who also is a senior sustainability scientist at ASU’s Julie Ann Wrigley Global Institute of Sustainability. “Modification of large swaths of existing California landscapes to urban areas raises regional climate concerns for future residents.”

What Georgescu found was that as the state deploys temperature-mitigating technologies, there are secondary effects that appear to take place – less daytime air turbulence – which could lead to higher concentrations of pollutants.

“This finding shows that as temperature mitigating technologies of the sort investigated in this research are deployed, they considerably reduce daytime air turbulence, and therefore identical future emissions of pollutants ... will be confined to a smaller volume, decreasing perceivable air quality,” added Georgescu.

For example, the impact of more efficient transit and transportation systems with decreased emissions are likely to play important roles in terms of actual air quality impacts. He added that a principal take-home message of this work is the significance of such urban adaptation strategies extending beyond just near-surface temperature impacts, since humans must breathe this modified air.

In addition, targeting the urban heat island itself, primarily a nighttime rather than daytime phenomenon, is a research area requiring further consideration.

“The bulk of the UHI (urban heat island) effect occurs due to reduced loss of energy from the urban infrastructure during nighttime hours,” Georgescu said. “The strategies explored in this work and those that are widely considered today as reasonable and practical choices illustrate much greater capability to reduce daytime temperatures, but exhibit little effects during the nighttime hours, when reduction of the UHI is required most. Consequently, common urban adaptation approaches do not directly tackle the effects of the UHI.

“So, orientation of buildings and preferred landscape configurations that permit long-wave radiation loss during nighttime hours and directly target impacts associated with urban expansion are critical to examine further,” he added.

Heritage language learners have access to an innovative way to share their cultural experiences and enhance their linguistic skills through a collaborative approach to education called the CIRCLE Project.

Heritage language learners have access to an innovative way to share their cultural experiences and enhance their linguistic skills through a collaborative approach to education called the CIRCLE (Community, Identities, and Research through Collaborative Language Education) Project. 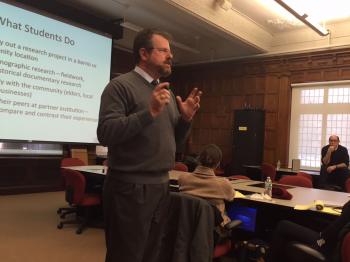 According to Ross, the CIRCLE Project is a framework through which heritage language learners can approach identity, storytelling, and community. It is intended to bring together students from multiple institutions and have them create and share information collected in their home communities.

“The project offers innovative ways to conduct fieldwork, interviews, historical documentary research, and to be more engaged with community members and organizations outside of the classroom, all while interacting with partner schools,” Ross said.

The CIRCLE Project evolved from Ross and Charitos’ original collaboration, the Hispanidades Project, created in 2009 to explore ethnic heritage and identity issues in Spanish-language classrooms. During their presentation at Yale, Ross and Charitos showed a documentary that was conducted in Spanish and created by Hispanidades students. The story highlighted the culture, economics, and life of the Anglo and Hispanic communities in Surprise, Arizona, and is just one of many examples of potential projects CIRCLE students will be encouraged to do.

“We encourage the students to find a story that is meaningful to them, and to tell that story,” Ross said. “Usually, it’s a story with both intellectual and social meaning.”

ASU Spanish heritage language students who are socially engaged, committed to helping others, interested in learning to conduct research in the community, and interested in developing interviewing and storytelling skills in Spanish can enroll in a three-credit Spanish course called Hispanidades (SPA 394). The course explores Hispanic identity in a variety of places and social contexts including New York City, San Diego, Seattle, Chicago and the greater Phoenix metropolitan area.

The program places students with community service organizations to give them an idea of what that specific Hispanic community is like, beyond the superficial stereotypes. To broaden their perspectives, students will correspond with student colleagues engaged in similar explorations through other academic institutions to compare and contrast their respective ﬁndings, and they will ultimately create a mini-documentary to chronicle their experiences.

Communications Coordinator, School of Civic and Economic Thought and Leadership