A common belief in the West is that al Qaeda wishes to impose Islam everywhere. This might be a pipe dream for the group, but a new study of their use of religious texts suggests that Islamists’ goals are much more modest.

Researchers with ASU’s Center for Strategic Communication (CSC) analyzed more than 2,000 items of propaganda from al Qaeda and related Islamist groups from 1998 to 2011. They catalogued more than 1,500 quotes from the Qur’an that extremists used to support their arguments, and identified the chapter (surah) and verse represented in the quote. 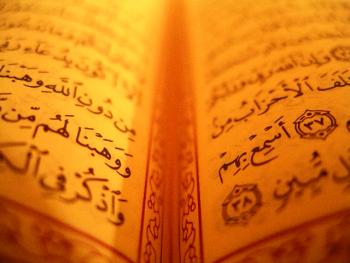 Results showed that most of quotes are about enduring hardships and maintaining faith and hope in the face of attacks by enemies of Islam. The so-called “Verse of the Sword” (9:5) that says “fight and slay the pagans wherever you find them” was used only three times.

“We were surprised at the very limited use of the sword verse,” said Bennett Furlow, a research assistant and one of three co-authors of the study, “How Islamist Extremists Quote the Qur’an.” “Conventional wisdom says Islamists are bent on world domination and this verse is the justification. We found it to be insignificant,” he said.

The verses most frequently cited came from three surah, Surah Nine, Surat at-Tawbah (“The Repentance”), Surah Three, Surat al-Imran (“Family of Imran”) and Surah Four, Surat an-Nisa (“The Women”). They address enduring hardships and the importance of fighting against the unjust outsiders who oppress men, women and children.

“These findings challenge the idea of a clash of civilizations,” said the study’s lead author Jeff Halverson, a professor of communication in ASU’s College of Liberal Arts and Sciences in reference to the theory that future wars will be fought over religious identity rather than national boundaries. “What extremists are really saying to Muslims is, ‘our communities are under siege and God will defend us if we have faith and courage’.”

It is important to be realistic about Islamists’ arguments when trying to counter their influence attempts, noted ASU’s Herberger Professor and study co-author Steve Corman. “If we try to portray them as evil conquerors when their audience sees them as protectors and champions, it damages our credibility and makes our communication less effective,” he said.

The study concludes with four recommendations for the West: 1) abandon claims that Islamist extremists seek world domination; 2) focus on addressing claims of victimization; 3) emphasize alternative means of deliverance; and 4) reveal that the image of “champion” sought by extremists is a false one. Other studies have shown in fact that al Qaeda-linked militants are 38 times more likely to kill a Muslim than a member of another group – hardly the activity of a “competent champion,” the ASU study states.

The study of Qur’an quotes is part of the larger project at the center titled “Identifying Terrorist Narratives and Counter-Narratives: Embedding Story Analysis in Expeditionary Units,” which examines Islamists use of narrative and persuasion to influence contested populations in the Middle East, North Africa and Southeast Asia. The six-year effort is being funded by the Office of Naval Research.

The Center for Strategic Communication is a research unit of the College of Liberal Arts and Sciences and a strategic initiative of the Hugh Downs School of Human Communication at Arizona State University. Established in 2005, the center promotes advanced research, teaching, and public discussions of the role of communication in combating terrorism, promoting national security, and improving public diplomacy.

To learn more about this project: http://asu.edu/courses/fms000/CSC_Video/CSC-FINAL.swf.

Make it three Sun Devil men's basketball players on the way to London for the 2012 Olympics.

Make it three Sun Devil men's basketball players on the way to London for the 2012 Olympics.

When the Great Britain roster was announced, it was good to see London native and 2009 Sun Devil graduate Eric Boatengon the roster.

Two days later, the USA Basketball roster was announced, and the youngest player on the team was NBA Sixth-Man of the Year was chosen, as James Harden was selected.

Make it three, as 2004-05 Pac-10 Player of the Year and All-America pick Ike Diogu put Nigeria on his back and led it to an 88-73 win over the Dominican Republic in the final qualifying game in Caracas, Venezuela.

Diogu scored 25 points and grabbed 10 boards en route to MVP honors as Nigeria earned the final men's basketball spot. Nigeria, which came into the tournament ranked 21st in the world, upset both Lithuania and Greece, two of the top five teams in the world, to advance to the semifinals after losing to Venezuela in its tournament opener on Monday. Nigeria fell behind 14-6 in the first quarter before regaining their footing, running off nine straight points as a steal and score by Dagunduro gave Nigeria a 15-14 lead and would never trail again. Nigeria built a 10-point lead in the second half, but could not pull away until late. The Dominican Republic tied the score at 64 midway through the fourth quarter, but Ike Diogu keyed an 8-2 run with a pair of 3-pointers to give Nigeria a seven-point lead.

John Calipari coached the Dominican Republic, and it might have been a case of deja vu for him watching Diogu dominate. In the 2003 NCAA Tournament, Diogu in his freshman year was masterful against Calipari's Memphis Tigers, going 9-of-11 from the field (including two three-pointers) in a 22-point, five-board effort in an 84-71 win in Oklahoma City.

The trio selected to the Olympics this year doubles Arizona State's previous men's basketball participants. Joe Caldwell earned gold for the USA at the 1964 Olympic games in Tokyo, and 16 years later Alton Lister was selected for the 1980 USA team in Moscow that boycotted the games. Shawn Redhage, who helped lead Arizona State to the 2003 NCAA Tournament as a senior, was on the Australian squad in 2008.

Russia and Lithuania also qualified with semifinals victories Saturday. In London, Lithuania and Nigeria will join the United States, Tunisia, France and Argentina in Group A. Russia, China, Britain, Brazil, Australia and Spain are in Group B.