Two teams that joined Arizona State University engineering and nursing students took second- and third-place prizes in a national student competition sponsored by the Institute of Medicine and the National Academy of Engineering. 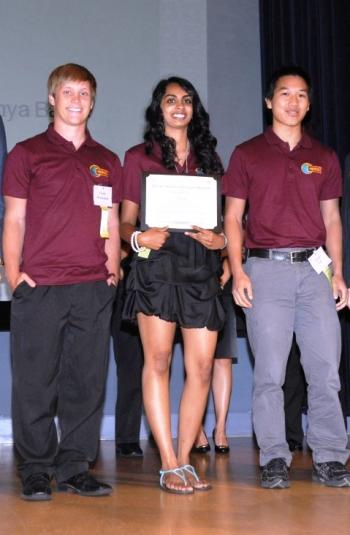 
Team Freebee was awarded the $2,000 second-place prize for its application to spread awareness on college campuses about healthy risks such as alcoholism, smoking, unsafe sex, drug use and campus safety issues.


Learn">http://www.youtube.com/watch?v=yd-qKqIjCT0">Learn more about the Freebee application.


Read">http://www.interactivemedicalplanner.com/">Read more about the IMPAct application.


Five ASU teams – involving 25 students in all – were formed to represent ASU at the competition. The effort was organized and supported by the Engineering Projects in Community Service (EPICS) program.  Now in its third year, EPICS puts engineering students –  and students in other areas of study –  to work helping nonprofit and community groups solve engineering problems.


Three students from each of the winning teams traveled to the National Institutes of Health campus in Bethesda, Md., to receive their awards and exhibit their projects. They were accompanied by faculty mentors Richard Filley, the director EPICS, and Anne-Marie O’Brien, a faculty associate in ASU’s nursing college.


Students had just six weeks to prepare for the Health Data Collegiate Challenge, but were aided by faculty members in ASU’s Ira A. Fulton Schools of Engineering and the College of Nursing and Health Innovation who volunteered their time to be project mentors.


“You see how different the engineers’ language is from the nursing students’ language, and how important it is for each team member to contribute and ask each other to explain what they’re talking about,” says Shea, an assistant professor of nursing and an affiliate faculty member in ASU’s Department of Biomedical Informatics and Biomedicine.


“What one student didn’t think of doing in developing the project, another student did,” Shea says. “When that kind of collaboration happens, amazing things like the IMPAct app can be created in a short period of time.”


The performances of ASU’s teams at the competition are likely to spawn more collaborative efforts among students in engineering and health fields. “I’m now looking at several different ways that EPICS can build on these successes in the health care arena,” Filley says.


The $3,000 first prize at the competition went to SleepBot submitted by Cooper Union for the Advancement of Science and Art, New York University and Northwestern University. SleepBot records users' sleep habits and benchmarks them against potential risk associated with sleep deprivation.


"Go Viral to Improve Health" was administered by Health 2.0, which serves as an organizer of health care technology conferences, a community of innovators, and a media network.

ASU's track and field teams posted a pair of Top 25 finishes in the 2011 NCAA Division I Track & Field Championships.

The 2011 NCAA Division I Track & Field Championships came to a close inside Drake Stadium, June 12, in Des Moines, Iowa, where the Arizona State University track and field teams posted a pair of Top 25 finishes in the final competition of the 2011 collegiate season. Three Sun Devils competed on the final day of action and were led by Darius">http://thesundevils.cstv.com/sports/c-track/mtt/terry_darius00.html">Darius Terry, who finished 10th overall in the men’s 1,500m run to earn the program’s first All-America honor in the event.


Texas A&M captured both team titles with the women taking the crown with 49 points and the men and 55. The Sun Devil women scored 15 points to finish 19th overall with Oregon (45), LSU (43.5), Oklahoma (42) and Arizona (35) rounding out the Top 5. In the men’s standings, the Sun Devils scored 10 points to tie for 25th place with six other teams (Alabama, California, Illinois State, Virginia, Washington State) while the Top 5 behind TAMU included Florida State (54), Florida (53), LSU (46) and Virginia Tech (36). 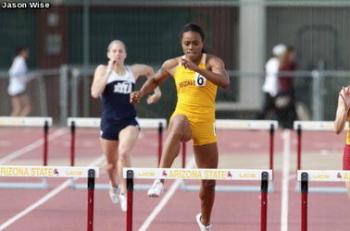 
On the track, Terry was in the mix in the race the whole way as the field began to spread out with one lap remaining. In the end, Terry wound up 10th overall in 3:46.52 and earned second-team All-America honors, securing the first All-America honor of any type in the event in ASU men’s history. With that honor earned, Sun Devil athletes have earned at least on All-America honor in every event contested on the track and in the field.


Two Sun Devils also competed in the field with Chris">http://thesundevils.cstv.com/sports/c-track/mtt/benard_chris00.html">Chris Benard jumping 15.39m (50-06.00) in the triple and finishing 19th overall in the competition. Anna">http://thesundevils.cstv.com/sports/c-track/mtt/jelmini_anna00.html">Anna Jelmini, the women’s discus runner-up three days earlier, also competed in the shot put and placed 23rd overall with a toss of 13.93m (45-08.50).


Several Sun Devils, both current and former, will head to Eugene, Ore., in two weeks to compete in the USATF Outdoor Championships.