For someone who says she chose biomedical engineering as a major in her freshman year at Arizona State University “because it just sounded good,” Lauren Meiss has fared rather well academically.

Actually, she has excelled – both in and out of the classroom. 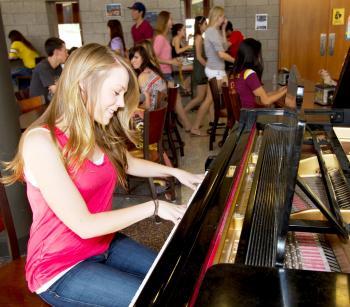 Now a senior planning to graduate in the spring of 2012, Meiss has her sights set on further schooling to earn a dual degree that would train her to become both a physician and a medical scientist.

One of her latest achievements will aid her pursuit of that goal.

The company awards the program’s scholarships annually to support students living with cystic fibrosis, an inherited chronic disease that affects the lungs and digestive system.

From among many applicants across the United States, Abbott earlier this year selected 40 finalists – each of whom received a $2,500 scholarship award. From among the group, one graduate student and one undergraduate student were chosen for the Thriving Student awards, which this year provides an additional $16,500 in scholarship funds.

More than academic records are considered. Students are judged on their extracurricular activities, creative talents, community involvement and “ability to serve as positive role models.”

Meiss’s resumé shows why she scored highly on all counts.

As a student in ASU’s Barrett, The Honors College, she currently carries a 4.23 grade point average for her upper-division courses.

Her performance in the biomedical engineering program in the School of Biological and Health Systems Engineering, one of ASU’s Ira A. Fulton Schools of Engineering, has earned her summer positions as a student-assistant at a prominent Stanford University research center and in the cystic fibrosis research lab of Children’s Hospital Oakland Research Institute.

She’s involved in a premedical scholars program at Mayo Clinic and performs volunteer work at the Mayo hospital. She assists with patient support services at the Phoenix Children’s Hospital Cystic Fibrosis Center.

Meiss did an internship as a guide and educator at Arizona Science Center and won an ASU Fulton Undergraduate Research Initiative competition for robotics design and programming.

She’s a co-author of research project summaries published in medical journals and collaborated on a presentation given at a major cystic fibrosis research conference.

Meiss has volunteered as an outreach coordinator for the Biomedical Engineering Society and for a program that encourages young students to pursue careers in engineering and science.

“Lauren was the most outstanding student in my class last spring” says ASU biomedical engineering associate professor Michael Caplan. He taught her in Bioengineering Transport Phenomena – a junior-level course about how molecules move around the body. “Her dedication to the day-to-day work combined with a natural academic talent make Lauren an exemplary student,” Caplan says.

When not immersed in studies, research and community activities, Meiss has displayed an artistic side.

She’s an experienced musician – a pianist – composer, singer and dancer. In high school she performed in show choir, which requires both singing and dancing skills.

She was in an all-state show choir for three years and ranked among the top 10 high school alto show choir students in Arizona. She was musical director for a school theater production – in which she also acted – and choral director for a church choir.

The video she submitted for the “creative presentation” required of applicants for the CareForward scholarship featured Meiss singing one of the songs she has written, performed and recorded to support fundraising for the Cystic Fibrosis Foundation.

(The video was produced by her brother, Trevor Meiss, a freshman studying computer systems engineering in the Ira A. Fulton Schools of Engineering.)

Her achievements are all the more impressive considering the efforts she must make to maintain her health.

Each day Meiss must adhere to a regimen of medication, treatment and exercise to prevent the potentially debilitating consequences of her condition. She’s also undergone several surgeries to remedy some of the troublesome physical effects of cystic fibrosis.

Her fortitude in coping with the disease is “a testament to her character,” says Thomas Martin, a lecturer in the Barrett honors college for whom Meiss is currently a teaching assistant.

In a letter of reference for Meiss, Martin noted the habit of some students to make excuses for the lack of quality in their school work “when they encounter hindrances and obstacles that are slightly out of the ordinary.”

In contrast, Martin wrote, during a semester in which Meiss was a student in his class, “Lauren never once asked for special treatment” due to her condition, “despite the fact that she faces daily challenges that are beyond what most of her peers (or instructors) have to face.”

Meiss is using her experience with the disease as career motivation. She has recently applied for a prestigious Fulbright Scholarship. The program enables college graduates to study and conduct research in other countries as a way to foster international relations between potential future leaders in science, engineering, education and other fields.

She hopes to study in Sweden and learn from researchers there who are making advances in treatments to prolong the lives of people with cystic fibrosis.

See the essay and video Meiss submitted as part of her application for the CareForward Scholarship, and the Abbott company’s news release about this year’s scholarship winners.

Bring a date, or come solo. But come to the second annual Date Festival sponsored by the Arboretum at ASU.

Bring a date, or come solo. But come to the second annual Date Festival sponsored by the Arboretum at ASU. 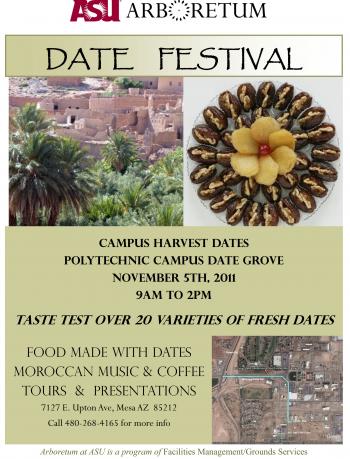 Visitors will be able to taste more than 20 varieties of fresh dates, picked from the ASU date groves, as well as enjoy food made with dates, Moroccan music and coffee, tours and presentations.

The date varieties to be sampled will include freshly harvested Medjool, Khadrawy, Khalasah, Black Abada-Medjool hybrid, Amir Hajj, Black Sphinx, Tadala, Maktoom, Tabarzal, Barhee, Zahidi and Honey dates. The dates also will be for sale by the pound.