During the summer months, Arizona residents are well aware of the status of water as a scarce resource, one that is to be conserved and managed. Many people, however, are unaware of the various stages of water as it is used and reused.

The status of water as clean or dirty isn’t a black and white issue: in between, there is also gray water. 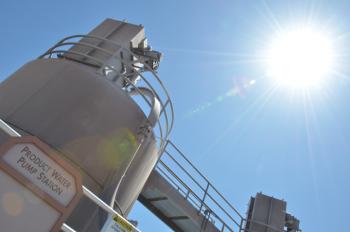 Gray water is water that has been previously used for a purpose that lowers its quality, but with minimal treatment (such as filtering), it can be reused for other purposes. The gray water is treated to a water quality level that meets regulations. At this point, it is called effluent, and can be discharged or used for a variety of beneficial purposes, such as agricultural and landscape irrigation, industrial cooling and groundwater recharge.

Researchers in the Decision Center for a Desert City (DCDC) at Arizona State University are studying the uses and reuses of this water in our local communities, on both a technical and social level. Established in 2004 with funding from the National Science Foundation, the center seeks to advance scientific understanding of environmental decision-making in the community.

Projects at the center focus on climatic uncertainties, outcomes and adaptation decisions. Researchers studying these outcomes and decisions run the gamut from physical scientists to economists to psychologists.

In fall 2011, ASU announced a partnership with CH2M HILL and Intel Corporation on a program called WaterMatch. Begun as a grassroots initiative to promote the beneficial reuse of effluent by industrial and agricultural users, the WaterMatch website uses social networking and geospatial mapping to connect water generators with water users.

“The partnership with CH2M HILL and Intel on WaterMatch gave us an opportunity to conduct research about the incentives for wastewater reuse, as well as the constraints and barriers,” says Dave White, principal investigator and co-director of DCDC. “This is important because there are many different groups that are pointing to water reuse as an important part of the solution for water sustainability.”

Intel has saved billions of gallons of water over the years by using recycled water to operate their microchip factories.

Many of Intel’s factories are located in other water-scarce regions, such as New Mexico, Israel and northern China. As a result, the company is constantly thinking about how to promote water sustainability in these regions, as well as in Arizona.

“Water is a regional issue, and we need to develop a water strategy that exists outside our own factories and look into opportunities like WaterMatch that can maximize the impact of saving water,” says Niekerk.

The grant from Intel provided funds to hire two students to contact and gather information from water treatment plants all over Arizona and New Mexico.

“It’s become a contributor to a couple of different research efforts that we have,” says White. “It’s been very helpful for us to get an estimate on how much municipal wastewater is being put to reuse currently, as before there was a limited amount of information.”

Two ASU students were selected to work in conjunction with Intel and DCDC to assist CH2M Hill with their data collection process. Rud Moe graduated in May 2013 with degrees in sustainability and geology. Saad Ahmed also graduated in May from the School of Sustainability with a minor in urban planning. The two worked together to build a comprehensive database for the site.

“One of their goals was for us to be ambassadors for the program and to potentially get something similar started at other universities,” says Moe. “Hopefully this could eventually become a project for other clubs and universities, to find places in their local communities and undergo a similar process.”

Moe and Ahmed located wastewater treatment facilities that produce effluent potentially available for use and reuse by various agricultural, municipal and industrial sectors. After successfully populating the Arizona database, they moved on to completing the database for New Mexico.

“One of the biggest issues with environmental planning is trying to allocate water responsibly and not use it in a manner that is wasteful,” says Ahmed. “When I first got involved with this project, I learned that there are different grades to water reuse. Once we started getting deeper into the project I had to start reading up on the technical jargon for these different grades.”

With fields of study directly related to the WaterMatch project, Moe and Ahmed both managed to integrate work done for classes into the project, and vice versa. Ahmed was initially hired after impressing Intel with a class project that outlined creation of a policy at ASU to preserve water and use it more efficiently. Moe tied the project into his Barrett honors thesis, a comparative water policy analysis of Mesa, Arizona and Hermosillo, Sonora, Mexico.

“It’s always fun for me with students to see their growth throughout a project,” says Sally Wittlinger, research analyst and data manager for DCDC. “Young people bring energy. When the students are here they create a vibrant atmosphere that makes DCDC an exciting place.”

Wittlinger supervised Moe and Ahmed during the WaterMatch project, acting as a sounding board for any problems or questions the two might encounter along the way. She also supervises the center’s other student workers.

Taylor Ketchum, a junior majoring in chemical engineering with a minor in sustainability, is one of these student workers. Among other responsibilities, Ketchum gathers data to update the Arizona Indicators website.

The Arizona Indicators initiative was created to establish a central resource for data and insights to support policymaking and public awareness of various issues ranging from education to health to environmental quality – including water.

“I was really interested in what they were doing with water and climate, and how they approached it from more of a social science perspective instead of a technical science perspective,” says Ketchum. “They work a lot with politics and how people perceive data, and not just with what the data says.”

Last fall, Ketchum worked as a DCDC intern with the Arizona Department of Water Resources, researching groundwater. The internship program helps to build a bridge between public or private agencies and the academic community.

Additionally, the center hosts monthly Water/Climate Briefings during the school year. The briefings are a regular forum for the water policy community, researchers and students to exchange knowledge and ideas. Each briefing focuses on a particular theme, such as the urban heat island, water reuse or the energy-water nexus.

“It’s really important for students to know about the bigger picture,” says Wittlinger. “There’s a lot of interaction and chances for people to ask questions and get a dialogue going.”

With the WaterMatch project winding down in Arizona, DCDC hopes to hand off the data collection efforts to other universities, particularly in Mexico, in order to establish similar wastewater databases for producers and users.

While originally designed to develop knowledge and support tools for policy and science discourse in central Arizona, DCDC has in recent years focused more on comparative studies with other regions and cities, both domestically and abroad. Study areas include U.S. cities such as Portland and Boston, as well as urban areas around the world such as Monterrey, Mexico and Recife, Brazil.

“This research center, from its initiation, was designed to serve as a bridge between different communities,” says White. “This center is a place where stakeholders, decision-makers and scientists come together to cooperatively produce important knowledge. By having these relationships, we’re not only going to do science that’s relevant, but we’re going to do better science.”

Get back in the groove with employee wellness classes

As the fall 2013 semester begins, all faculty and staff are invited to take advantage of any of the several employee wellness learning opportunities offered by the ASU Employee Wellness Program on the Tempe campus.

Get back in the groove with employee wellness classes

Classes are back in session, and not just for students. All faculty and staff are invited to take advantage of any of the several employee wellness learning opportunities offered throughout the fall 2013 semester at the Tempe campus by the ASU Employee Wellness Program.

Classes are taught by trained professionals with years of experience in their field, and topics range from smoking cessation to learning how to forgive. Take a break from your workday to focus on your health and well-being, and stop by one of these events.

Kicking off the schedule, from 7:30 a.m.-12:30 p.m., Aug. 27, in room 228 (Cochise) in the Memorial Union, all ASU benefits-eligible employees with an insurance card issued by the state of Arizona can get a 30-minute health screening with immediate results. Several free tests are available that will provide read­ings for cholesterol, blood pressure and triglycerides. Other tests, such as a PSA cancer screening (recommended for men aged 40 and older), are available at varying costs, starting as low as a $5 copay. To register online, click here.

Next up is “The QUIT! Program!” This informational smoking cessation meeting is scheduled for noon-1 p.m., Aug. 30, at the Employee Assistance Office, The Towers, suite 101. Improve your health, feel better and live longer – all while saving money. Led by Suzanne Jacobs, a licensed clinical social worker and senior counselor at the ASU Employee Assistance Office, this class will give you all the tools you need to quit and stay quit. Did you know that if you quit smoking, within 20 minutes your blood pressure and pulse rate drop to the levels they were at before you started smoking; within eight hours your blood levels of carbon monoxide and oxygen return to normal; after 72 hours your lung capacity begins to increase; and within 3-5 years, your risk of heart attack drops to that of a non-smoker? Registration is required and the deadline is Aug. 23. Click here to reserve your spot today.

Are you a sodium chloride addict? If you’re guilty of piling on the table salt, then stop by from noon-1 p.m., Sept. 4, room 207 (Gold-second floor) in the Memorial Union and “Shake the Salt Habit.” Research shows that many Americans should cut way back on the sodium in their diet, but most are not doing that. Attending this workshop could answer many of the questions you’ve been asking about the effects of salt, such as, “How can I lower my salt intake without giving up flavor?” and “What is the DASH Diet and how might it help me improve my health, and even lose weight?” Join graduate students in the Master of Science in Human Nutrition program for an interactive presentation on the benefits of reducing sodium in your diet and suggestions for how to do so. Registration is required (with a 15-participant minimum) and the deadline is Aug. 28. Click here to reserve your spot today.

Finally, Jacobs also will be presenting “Learning the Art of Forgiveness,” from noon-1 p.m., Sept. 5, in room 236 (Mohave) in the Memorial Union. Did you know that holding a grudge is hazardous to your physical and mental health? Join Jacobs as she shares Fred Luskin’s model of forgiveness based on his famous book, “Forgive For Good,” and learn the healing powers and medical benefits of forgiveness. Registration is required (with a 15-participant minimum) and the deadline is Aug. 29. Click here to reserve your spot today.

For questions regarding any of the events mentioned above, contact Liz Badalamenti at (480) 727-6517 or Elizabeth.Badalamenti@asu.edu.