When Arizona State University graduate student Anthony Gonzales suffered a concussion during a multiplayer collision at a collegiate rugby game, he didn’t have any typical concussion symptoms. With no idea that he had just sustained a serious head injury, he attempted to keep playing.

Fortunately for Gonzales, a trained EMT who saw the collision recognized the possibility of concussion and intervened, recommending that he remain on the bench. Had Gonzales stayed in the game and absorbed another blow to the head, the damage to his brain could have been significant.

Determined to help other athletes minimize the risk of head injuries, Gonzales and ASU alumnus Bob Merriman founded Force Impact Technologies (FIT) earlier this year. And thanks to the company’s innovative new FIT Guard, athletes, coaches and trainers now have an effective tool to help assess whether a player has sustained a head injury.

The FIT Guard, which embeds force-detection technology into a mouth guard, is already garnering international attention for the company: FIT has been selected as one of 50 finalists in the Global Entrepreneurship Week Startup Open, a global competition that recognizes the top startup companies founded in the last year. The 50 finalists have been deemed as the most promising ventures from around the world based on a range of criteria that includes strength of concept, growth projections and knowledge of the market. Startup Open winners will be announced during Global Entrepreneurship Week, which takes place Nov. 18-24.

The FIT Guard works by measuring the force of an impact and illuminating when the force exceeds a set threshold, providing a visual indicator of the level of force. Different colors are used to indicate different levels of force, each color correlating with the probability that the player suffered a concussion based on reasonable concussion proximities derived from clinical research. The device, which uses an accelerometer and a gyroscope to measure acceleration, has been proven to have a high level of accuracy in measuring force.

“Our goal is to minimize the risk associated with players continuing to play after suffering an undetected concussion,” said Gonzales, an MBA student in ASU’s W. P. Carey School of Business. “Ultimately, this will help reduce the long-term health effects associated with repeated head trauma.”

The FIT Guard’s emergence comes amid growing awareness of the dangers of repetitive brain injuries in contact sports, particularly among young athletes. A study issued Oct. 30 by the Committee of Sports-Related Concussions in Youth reported that there is a “culture of resistance” when it comes to self-reporting of concussion symptoms by young athletes, who are reluctant to let down teammates, coaches and parents. The FIT Guard gives coaches and trainers an effective way to objectively evaluate the possibility of concussion, rather than relying on athletes to report their own symptoms.

FIT is one of nearly 30 student startups in ASU’s Great Little Companies Network. The campus-based program, which is managed by ASU’s Entrepreneurship and Innovation Group, supports up to 30 startups each year, providing $3,000 each in grant funding, as well as direct mentoring through the Changemaker Central locations on each of ASU’s four campuses. ASU also fosters student entrepreneurship through the Edson Student Entrepreneur Initiative, which provides support to an additional 20 startups.

The Entrepreneurship and Innovation Group, launched in October 2010 as ASU Venture Catalyst, is a joint initiative between the Office of Knowledge Enterprise Development and Arizona Technology Enterprises. Originally created to accelerate high-potential startup companies, the unit has grown to encompass not just startup acceleration, but a broad range of entrepreneurship-related activities across the university, the metro area and the state.

Can you break the code? CryptoRally event to challenge students

Think you can decipher secret messages? Try your hand as a super sleuth during the third annual CryptoRally, Nov. 2, at ASU’s Tempe campus.

Can you break the code? CryptoRally event to challenge students

Think you can decipher secret messages? Try your hand as a super sleuth during the third annual CryptoRally, Nov. 2, at ASU’s Tempe campus.

Students from the School of Mathematical and Statistical Sciences, and other students who are interested, will be challenged to solve a series of ciphers – words turned into a secret code. Starting at 10 a.m., teams will receive their first cipher, which can be solved using mathematical techniques. Once a cipher is solved, each team is then led to their next clue, similar to a scavenger hunt. 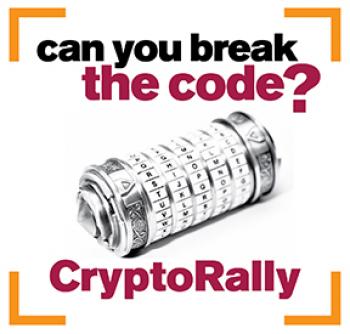 For the first time, this year’s competition will include a "junior" division for middle school students who have been studying cryptography and practicing their deciphering skills. Prizes will be awarded to the winning teams in both collegiate and middle school-age categories.

The event is directed by Nancy Childress, professor of mathematics, who teaches cryptography and has run the CryptoRally for the past two years.

Cryptography, the technology of making and breaking codes and ciphers, is an important field of study today, according to Childress. “Cryptography applies anytime one is concerned with information security, whether the information is personal, financial, proprietary or defense-related.”

After the competition, there will be a cryptography lecture. In “Cannonballs, Donuts, and Secrets: An Introduction to Elliptic Curve Cryptography,” Lawrence Washington of the University of Maryland will describe how elliptic curves have become very important in cryptography. The lecture, which is free and open to the public, is set to begin at 4 p.m., in the Life Sciences E-wing, room 104.

The event is sponsored by Apriva, a secure mobile communications company based in Scottsdale, Ariz.

The CryptoRally will begin in the Physical Sciences A-wing, room 206. A full schedule of the day’s event can be found at math.asu.edu.