Despite having research experience, Katherine Sheppard, an earth and space exploration student with a focus in geological sciences, said she wasn’t sure if she was capable of her career goals because the work is technical and difficult.

Then a younger student asked her a question during an ASU GeoClub field trip, and Sheppard found herself answering it. 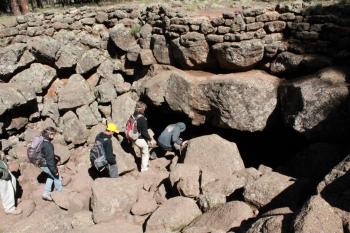 “I remember going from thinking I didn’t know anything at all to realizing I did know some things and that I would be able to know more,” Sheppard said. “That was a great moment because it opened up opportunities for me.”

As a senior, Sheppard is looking at graduate school as the next step toward earning her doctorate in geochemistry or igneous petrology, which is the study of igneous rocks. She had trouble at first narrowing a niche down, but she feels more confident in her decision to pursue igneous petrology because of her past experiences at ASU.

“I was able to do that with all research opportunities because I got to do a lot of things and decide what was cool and what I’d want to do,” Sheppard said.

Christy Till, an assistant professor at the school, also said Sheppard has performed at levels beyond her current education. Till, Sheppard’s honors thesis director, said she believes Sheppard’s research will be published in a journal in the future.

Sheppard is studying lava flows from Lassen volcanoes, which are volcanoes in northern California, to understand how they form in the Earth’s mantel. This will help people understand how and why these volcanoes form where they do.

“She picks up on concepts really fast and runs with them on her own without a lot of guidance,” Till said. “She’s good at integrating concepts together to form a foundation for future work.”

After switching majors within the School of Earth and Space Exploration, Sheppard took a freshman-year honors seminar course taught by former geology professor Achim Hermann. When she went to his office to talk about a paper, they ended up talking about his research.

She worked with him in the Keck Lab on environmental geochemistry as a freshman and sophomore. She said she liked being able to experience what it’s like to read results of research rather than conducting research.

“The sooner you get that experience, the better you adjust yourself to the expectations of what it’s actually like,” Sheppard said.

Sheppard also spent time working in the Secondary Ion Mass Spectrometry Lab at ASU during her junior and senior year. The lab is utilized by geoscience researchers to analyze the ion source design in various materials. Richard Hervig, a professor at the school, had asked her to work there after seeing her involvement in his class and her term paper.

“She has a reputation in our school as doing well in everything,” Hervig said. “In lab environment, she’s been great.”

In between all of her studies, Sheppard was involved with different student organizations. She is president of the ASU GeoClub, and she helps organize and raise money for trips to different sites. She also was involved with the ASU Quidditch team, the sport described in the Harry Potter series. She had to stop and prioritize time for her thesis over the sport, she said. Sheppard said prioritizing helped her throughout her college experience; however, that didn’t mean she always put school work first.

“If you’re becoming miserable studying, sometimes you have to stop studying and do something else,” Sheppard said. “I’m a big proponent of doing something else."

Participants between the ages of 35 and 64 are needed for a research study testing a new health-related smartphone app.

Participants between the ages of 35 and 64 are needed for a research study testing a new health-related smartphone app. 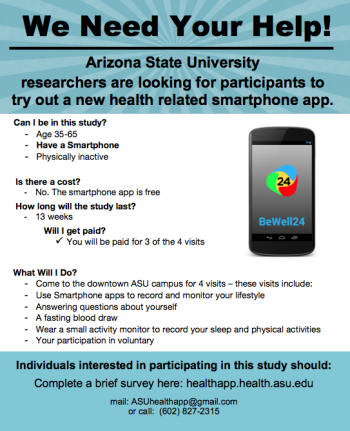 The study runs for 13 weeks and requires four visits to the ABC building in downtown Phoenix, located at 425 N. 5th St.

To see if you are eligible to take part in the study, visit healthapp.health.asu.edu.

The research is being conducted through the Department of Exercise Science & Health Promotion within the College of Health Solutions.