Student completes online MBA while being a war zone away

For Joshua Lippincott, the daily struggle of balancing life and school is more complicated than the school-life balance of a traditional university student.

As an officer in the United States Army, Lippincott's challenge lies in raising a family while completing his degree and serving in the U.S. military. 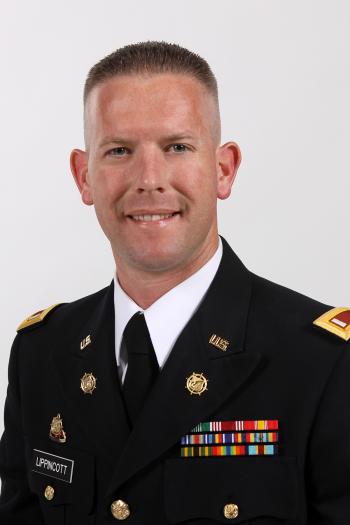 Struck by young love, Lippincott married his high school sweetheart and soon started a family in California – but he quickly realized his job opportunities were slim without a high school diploma. With bills piling up and a family to provide for, he made the decision to join the Army.

After working 14 years as a transportation officer, Lippincott decided to take advantage of the education benefits offered by the military. He earned a bachelor's degree in business and supply chain management from the University of Texas, and from there set his sights on the online MBA program offered through ASU's W. P. Carey School of Business.

“I chose the MBA program because I was looking for a school whose name has national recognition," Lippincott says. "The online aspect of the MBA program allowed me to attend graduate school regardless of my location. I can earn a degree while being deployed to a war zone in Afghanistan.”

Although Lippincott says there were times when he felt overwhelmed, he says that online communication tools like Skype and Blackboard were integral in helping him communicate with his peers. The interaction helped him gain a civilian perspective on the supply chain management projects on which he was working.

“I’ve tried to apply the concepts I’ve learned in classes within a military context. I get a lot of information from my peers that I can tweak based on different military tasks. I’ve really enjoyed that,” he said.

Another attractive feature for Lippincott at ASU was the Pat Tillman Veterans Center located in the Memorial Union on ASU's Tempe campus.

“ASU has been absolutely fantastic working with me as a vet," he says. "The Veterans Center made my life incredibly easy. They dealt with all of my paperwork, contacted the VA (Department of Veterans Affairs) and helped me maximize my time here.”

Lippincott will receive his degree this month from ASU. He says he is already thinking about working toward a doctorate and other professional certifications, as he says that additional training will make him a more appealing candidate in the competitive job market.

The "Arabic/Islamic Culture and Literature in Kuwait" study abroad program in the School of International Letters and Cultures gives students first hand lessons in the language and culture of the Middle East.

The School of International Letters and Cultures’ study abroad programs are among the longest running and most prestigious at Arizona State University. Founded in 1981, and directed by knowledgeable, world-class faculty, the programs offer students the opportunity to experience and study international humanities and learn languages firsthand while earning credit toward their degree.

This summer the School is offering a new program, “Arabic/Islamic Culture and Literature in Kuwait.” The program, which will be hosted by the American University of Kuwait, takes students on a two week, three-credit, learning excursion to Kuwait City, the capital of the State of Kuwait, in the gulf region of the Middle East. 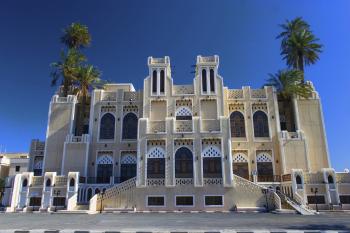 Kuwait is one of the most vibrant, attractive cities in an otherwise conservative region. The city contains a unique blend of century old traditions and modern-day culture, with quaint old monuments and ancient houses, displays of rich history, and a booming modern business of restaurants, hotels and other entertainment venues.

A recent article in the New York Times titled "For American Students, Life Lessons in the Mideast" notes that students who choose to study abroad in the Middle East are interested in careers in foreign service, non-profit or non-governmental agencies, as interpreters, or in academia. "These students know there is a shortage in America of Arabic speakers ... Knowing the language can only increase their job prospects."

“I hope to serve the State Department as a Foreign Service Officer in the Middle East, where I can contribute my knowledge and expertise,” says ASU alum Amirah Ismail. “My ultimate career goal is to increase mutual understanding and relationships between the U.S. and the Arab world. I’d like to help sponsor peace and prosperity in the region, as well as to work towards a global common good.”

After completing double majors in political science and global studies, combined with certificates in Arabic studies and Islamic studies, Ismail won a competitive award for graduate study, the Charles B. Rangel International Affairs Graduate Fellowship, providing about $80,000 for a master’s program and two internships.

The "Arabic/Islamic Culture and Literature in Kuwait" program is led by Associate Professor Souad Ali, faculty head of Classics and Middle Eastern Studies in the School of International Letters and Cultures, and director of the Arabic Studies program at ASU.

Ali, who earned her Ph.D. in Middle Eastern Studies (Arabic and Islamic Studies) from the University of Utah in 2004, is also an affiliate faculty member in ASU’s Center for the Study of Religion and Conflict, the School of Social Transformation's women and gender studies and African and African-American studies, and the Arizona Center for Medieval and Renaissance Studies.

As a Fulbright Scholar in 2010, Ali spent a year in Kuwait teaching, conducting research, and lecturing on Islam and secularism in support of rising ideas of separating religion and state, and modern perspectives on gender issues in Islam. She conducted extensive ethnographic research on Kuwaiti women in leadership positions for a book project on which she is currently working.

She was recently invited to attend a reception hosted by Secretary of State Hillary Rodham Clinton, in celebration of Eid Al-Fitr, a Muslim holiday commemorating the conclusion of the month of Ramadan, at the Department of State in Washington, D.C.

Focusing on the experiences of ordinary people in the Middle East, the program conveys a grassroots sense of regional culture and society.

Although the program shows Islam as a major influence in everyday life, it also demonstrates that other factors, such as work patterns and community and gender relations are of great importance in shaping individuals’ lives, beliefs and hopes.

For example, in Kuwaiti society “women are open, not closed, compared to women in some other Arab societies,” says Ali. “In 2009 four women won election to become parliament members, which is a significant breakthrough in the gulf region and proof of Kuwaiti women’s ability to change society and improve women’s status.”

As part of the program, students will have the opportunity to attend lectures by Kuwaiti experts in different fields including a lecture and Q&A session with one of Kuwait’s leading businesswomen, CEO of Kuwait Energy, Dr. Sara Akbar. With over 30 years of experience, Akbar is a renowned professional and personality in the international oil and gas industry. Kuwait is one of the world’s leading oil exporters.

Students are housed at the very comfortable Kuwait Palace Hotel overlooking the Persian Gulf, and located right across the street from the American University of Kuwait where classes are held.

The American University of Kuwait, which opened in 2004, is a private liberal arts institution based on the American higher education model, which boasts a large number of diverse faculty members including Arab and American professors. The design of the campus is open, featuring gardens and a Kuwati-style tent known as The Hangout, which offers students HD televisions, pool tables, gaming consoles, high-speed internet, athletic facilities, prayer rooms, and an American-style diner.

In addition to classes, students go on several educational field trips to both ancient and modern sights, including tours of the Kuwait Towers, a symbol of modern Kuwait, featuring a viewing platform, restaurant and a revolving cafe, Al Zumerida reception center, and trips to the Mesopotamian and Greek ruins of Failaka Island, and the enormous Marina Mall.

ASU makes every effort to ensure that our students, faculty and staff traveling abroad have the resources and information they need for a successful study abroad experience. Though absolute safety cannot be guaranteed abroad just as it cannot be guaranteed in the United States, ASU is committed to taking the necessary steps to maximize student safety at every program site. The ASU study abroad office takes the following steps to minimize risk to student participants:

• We monitor U.S. government advisories, considering both those issued by in-country embassies and consulates and by the Department of State in Washington, D.C.

• Our staff are in contact with all students abroad, and students are kept updated on travel warnings or potential threats in their area.

• We maintain an emergency telephone number for students abroad. The phone line is open 24 hours a day, 7 days a week.

• Students attend mandatory pre-departure orientation sessions during which health and safety issues are covered in detail.

The Middle East has been one of the most misunderstood regions in the world. Responding to a need to understand this area, the program offers a unique firsthand introduction to the Middle East that synthesizes cultural, literary, ethnographic and socioeconomic information while in one of the most stable countries in the region.

For more information about the "Arabic/Islamic Culture and Literature in Kuwait" program, contact faculty director Souad T. Ali at Souad.Ali@asu.edu