Applicants must be an experienced keyboard player – piano, organ or electronic keyboard – but do not have to be a music major. The scholarship is limited to undergraduate students at ASU. 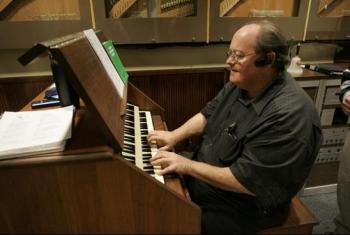 The winner must play a minimum of two concerts during each semester on the Symphonic Carillon, and give a wrap-up concert and presentation.

To apply, write a brief essay about why you would like to be the Arizona State Credit Union Student Carillonneur, and list your qualifications.

Applications must be delivered to the Arizona State Credit Union, located on the main level of the Memorial Union, Tempe campus, by 5 p.m., Sept. 28. Credit Union hours are 10 a.m. to 5 p.m., Monday-Friday.

To learn more about the Symphonic Carillon, send an e-mail to carillon@asu.edu to set up an appointment.

The Symphonic Carillon was a gift to ASU from student government in 1966. It is located on the lower level of Old Main.

From Jeremiad to Jihad: New book explores theme of religion, violence and America

From the Puritans to 9/11, a new book edited by an ASU ethicist explores how the forces of religion and violence have shaped and are continuing to shape American history and identity.

From Jeremiad to Jihad: New book explores theme of religion, violence and America

The attacks on the United States by Islamic terrorists on Sept. 11, 2001 led inevitably to a heightened interest in the relationship between religion and violence. As a new book of essays co-edited by an Arizona State University ethicist makes clear, however, the convergence of religion and violence symbolized by 9/11 was nothing new for America.

Using the story of the militant abolitionist John Brown as an entry point, the book, “From Jeremiad to Jihad: Religion, Violence & America,” traces the many faces of religion, force, violence and war in America’s domestic record and history of foreign affairs. The book grows out of a multidisciplinary conference held by ASU’s Center for the Study of Religion and Conflict and features historical, ethical, political, cultural, theological and rhetorical perspectives on religion and violence in the American context. 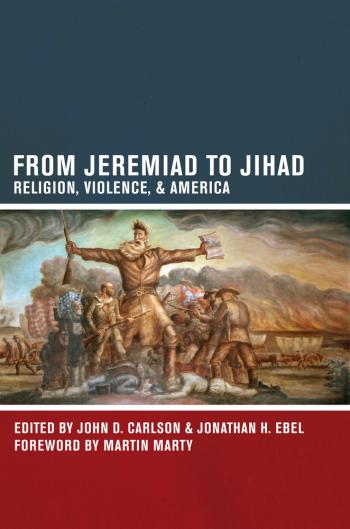 “This book seeks to raise deep questions and concerns that anyone interested in earnestly understanding America’s history and national identity can ill afford to ignore,” says John Carlson, the ASU ethicist who co-edited the volume. “Our aim is to help readers understand how violence, religion, and the relationship between them have informed the American experience.”

The title “From Jeremiad to Jihad” reflects the book’s chronological framework. The essays cover the period from the jeremiads of the early American colonists to the anti-American jihadists behind 9/11, and the war on terrorism that ensued.

Jeremiad, as defined in the book, is “a biblically rooted, sustained lament about a nation or people and their failure to live up to divinely ordained ideals.” The term is inspired by the Hebrew prophet Jeremiah, who warned of Jerusalem’s destruction for forsaking God.

Jihad is an Arabic word meaning “struggle” or “exertion” to follow the path of God. It can refer to a struggle against internal immoral impulses, known as the greater jihad, or against the perceived enemies of Islam, sometimes involving violence. The term became part of the American lexicon in the aftermath of 9/11.

“On that day jihad converged with jeremiad as elements on America’s left and right both interpreted al Qaeda’s attack as the United States’ bitter harvest for its various acts of immorality,” writes Carlson in the book’s introduction.  “This convergence serves as a crystallizing moment of recognition, inviting reflection upon a much longer history of religion and violence involving the United States.”

Carlson and his co-editor, historian Jonathan Ebel, also show how these terms connect American Muslims’ efforts to live according to their faith (greater jihad) to a long lineage of other Americans going back to the Puritans.

Scholars from 15 American universities including Duke, Princeton and the University of Chicago offer their reflections in this volume. The book is divided into three parts focused on 1) religious justifications for and explanations of violence, 2) American constructions of the religious “other” and 3) ethical questions about war and violence.

Part I considers key moments in U.S. history in which religious ideas of covenant, providence, and jeremiad have shaped the nation’s origins, identity and sense of purpose. From the Puritans’ arrival on the Arbella to speeches from Woodrow Wilson during World War I and John Foster Dulles during the Cold War, religious symbols and concepts have pervaded American culture.

Part II includes chapters examining Anglo-American Protestants’ relationships with Native Americans, Catholics and Mormons; violence in the American West in the 19th and 20th centuries; and how religious themes surrounded the 2007 Virginia Tech murders. Part III explores ethical questions related to the Revolutionary War, the Civil War and the war on terror.

“The contents of this book are strikingly diverse,” notes Martin E. Marty, the Fairfax M. Cone Distinguished Service Professor Emeritus at the University of Chicago, who wrote the foreward. “The book recognizes that relevant features of jihad overlap with jeremiads running through many features of American life, from colonial domestic scenes to postmodern global terrors.”

Carlson is also associate director of the ASU Center for the Study of Religion and Conflict, an interdisciplinary research unit of the College of Liberal Arts and Sciences that examines the role of religion as a driving force in human affairs. “From Jeremiad to Jihad” was published by the University of California Press.