In the wake of recent news about the roof of a Southwest Airlines jet ripping apart during a flight from Phoenix, Arizona State University engineer Nik Chawla talked about the causes of such dramatic incidents.

Often it’s a case of metal fatigue, the result of physical stress that degrades the resiliency of materials, explains Chawla, a professor of materials science and engineering in the School for Engineering of Matter, Transport and Energy, one of ASU’s Ira A. Fulton Schools of Engineering.

Repeated cycles of pressurization and depressurization exerted on aircraft in flight can produce enough strain over time to crack the aluminum alloys that make up the outer shell of many aircraft.

Chawla describes work he and other ASU researchers are doing to better predict the behavior of materials under various conditions. They’re developing advanced methods of detecting indications of materials fatigue, with the goal of preventing potentially catastrophic failures of materials.

Photosynthesis or photovoltaics: Weighing the impact

Which is more efficient at harvesting the sun's energy, plants or solar cells? This salient question and an answer are the subject of an article published in the May 13 issue of the journal Science.

Photosynthesis or photovoltaics: Weighing the impact

Which is more efficient at harvesting the sun’s energy, plants or solar cells? This salient question and an answer are the subject of an article published in the May 13 issue of the journal Science.


Although both photosynthesis and photovoltaics harvest energy from the sun, they operate in distinctly different ways producing different fuels. It is not a simple task to find common ground between the two in order to compare energy conversion efficiency. 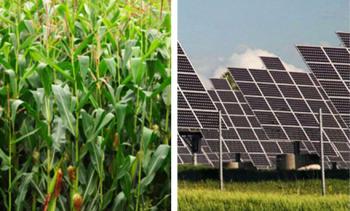 
“The hydrogen produced by the artificial system is thermodynamically equivalent to the sugar produced by photosynthesis. The take-home from this point is that the artificial system out performs the natural one, but on the basis of potential for efficient solar energy conversion as measured by the land area required for a given energy output, both technological and biological processes could in principle offer similar outcomes.”


Photosynthesis, on the other hand, originated in an environment where it was rapidly selected for, as it provided early life forms with a means of self-contained energy production. However, as with many evolutionary adaptations, it is far from a perfect, ideal system for the production of energy, and certainly is not optimal for providing solar-derived fuel to support human activities and economies.


With so many pigments absorbing light energy, the capacity of the photosynthetic apparatus to process the energy is quickly exceeded. In leaves in full sun, up to 80 percent of the absorbed energy must be dumped to avoid its diversion into toxic chemical reactions that could damage or even kill the plant.


Modern agriculture has pushed photosynthesis about as far as it can go based on incremental improvements such as selection for high yield crops, land use improvements, use of modern fertilizers, water use, pesticides to control pests, and in short, the green revolution and all that it entails.


“We have identified many of the important inefficiencies that arise from the basic design of photosynthesis and have suggested ways to reengineer photosynthesis to improve its ability to meet human energy needs,” said Moore, a Regents’ Professor in the Department of Chemistry and Biochemistry in the College of Liberal Arts and Sciences.


“These improvements to photosynthesis go beyond the incremental steps practiced since agriculture began thousands of years ago," Moore said. "At the end we allude to the use of synthetic biology to bring the knowledge and experience from fundamental studies in physics and artificial photosynthesis to photosynthesis in a combination of biology with technology to meet human energy needs.”


The cost to the biosphere of “our cut” of NPP is driving several Earth systems irreversibly across boundaries that were established over geological time scales, says Moore. Earth systems affected include the nitrogen cycle, carbon cycle, fresh water, land use, and an increase in the rate of biodiversity loss. In other words, photosynthetic energy flow is currently booked (almost certainly overbooked) for biosphere services including food and limited bioenergy production for human use. As a consequence, there are no reserves of photosynthetic capacity to provide increasing amounts of biofuel for growing our GDP and food for the ever-increasing human population. Indeed, when such demands are made, the capacity comes at the further peril of biosphere services.


“Fortunately, the efficiency of photosynthetic NPP could be dramatically improved to meet human needs - the 133 terawatts increased to about 150 terawatts with minimum additional impact on Earth systems,” explains Moore excitedly.


“I'm thinking about selected photosynthetic systems in which rational design, based on the principles demonstrated in artificial systems, could be used to optimize solar-to-biofuel conversion efficiencies to meet particular needs.”


“Such photosynthetic systems would be ’living’ in that they would retain key features of living cells including self-assembly, repair, replication and the use of Earth-abundant materials – features that I think are essential to scale and match sustainable energy production to local needs but that remain elusive to non-living, human engineered constructs,” concludes Moore.