The American Dream Academy helps families take charge of their children’s education and build stronger families and communities. The academy offers a variety of programs to students, teachers and families, including "Realizing the American Dream," "Financial Literacy" and others.

The Realizing the American Dream program is a 10-week, parent-empowerment program that teaches families how to navigate the educational process and take an active role in their children’s educational success. Through the academy's Financial Literacy Program, parent participants graduate with a written financial plan that includes a savings goal, establishment of an emergency fund and a manageable payment plan to reduce debt.

“Our commitment to education excellence for all students is a top priority,” said State Farm agent Derrick Spencer. “Students are more than our future workforce or tomorrow's leaders, they are the daughters and sons, nieces and nephews of State Farm agents and employees, and they are children of our friends and neighbors.”

Since 2006, the American Dream Academy has implemented 500 programs, served more than 27,000 parents and has impacted more than 65,000 students in Arizona schools.

The American Dream Academy is a core program of Arizona State University’s Office of Educational Outreach and Student Services. The academy connects the university with parents of elementary, middle and high school students in the community. Its mission is to provide parents with tools they need to help their children achieve academic success.

Judy Robles, the mother of NCAA wrestling champion and ASU alumnus Anthony Robles, will accept the fall 2014 Jose Ronstadt Outstanding Award on Dec. 17 at ASU's Hispanic Convocation, as she graduates alongside her 23-year-old son, Nicholas.

Judy Robles lives by a golden rule: no child of hers will ever leave home without a college degree. She says the same rule is also applicable to her.

“I want to be an example of perseverance, reaching your goals and finishing what you started, which is why I have spent the last few years pursuing my degree,” said the 43-year-old mother of five, who is also director of the Hispanic Mother Daughter Program in Educational Outreach and Student Services at Arizona State University. 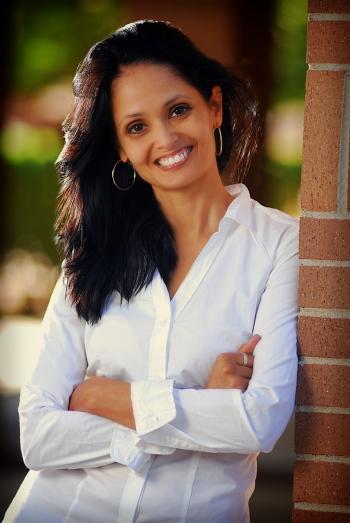 Robles is the mother of NCAA wrestling champion, best-selling author, pitchman and motivational speaker Anthony Robles. She said that she came to the realization that education was the only way for her eldest son, who was born in 1988 missing his right leg, to become self-sufficient.

“I immediately anticipated the limitations and challenges he would have to face that were much different than my own; but I was determined for Anthony to have his own life, and to be able to rely upon himself and not me,” Robles said. “I discovered that higher education was his path toward self-reliance.”

Anthony Robles graduated in 2011 from ASU’s College of Letters and Sciences with a business communications degree.

Next week Robles’ own path toward self-reliance will advance when she collects her bachelor's of science in communication on the same day as her 23-year-old son, Nicolas, on Dec. 16, at Wells Fargo Arena. She’ll also address students at the Hispanic Convocation, on Dec. 17, at ASU Gammage, where she'll accept the fall 2014 Jose Ronstadt Outstanding Undergraduate Award.

“I have a true bond with the younger students because they are like family. There is a deep connection I feel with them because I remember being where they are now at one point in my journey. I constantly told them it was going to be challenging and tough but together we were going to make it,” Robles said.

At times, Robles said she thought of quitting but an inspirational quote on her computer desktop kept her going: "When you feel like quitting, remember why you started."

“In this last semester, I worked full-time and took five classes, and it was exhausting and I had no social life,” Robles said. “In the end, I can honestly say it was all worth it.”

Robles said she’ll pursue a master’s degree in higher and post-secondary education next semester at ASU. Her ultimate goal is to move to London, England, and work in a similar program with first-generation high school students wanting to pursue college degrees. But not before her other children, Joshua, 20; Ronnie, 19; and Andrew, 15, collect their degrees from ASU.

“As I continue to confront the question, ‘Why not me?’ I want my children to one day ask themselves the same as they go on to pursue a master’s or a doctorate degree of their own,” Robles said.