Big Brother may not be watching you on ASU’s Tempe campus, but someone – or something – seems to sense your presence when you walk through the breezeway of the Stauffer building. 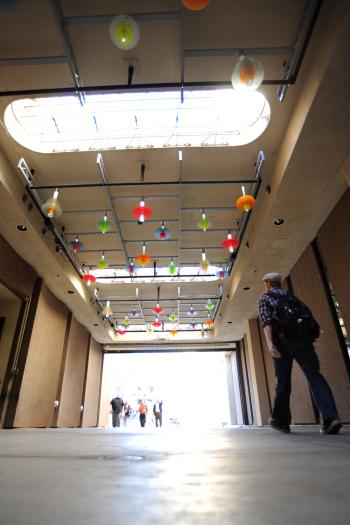 There’s a sound. Is it singing? A bird chirping? The murmuring of voices from the past?

There are lights, too – 45 futuristic lanterns of blue, orange, green. Are they watching, or listening, too?

The answer is yes. As you walk through the breezeway, the lights sense your presence and turn on, and your movement inspires various sounds.

You are in a “Sensory Meadow.”

“Thanassis Rikakis, former director of AME, had asked Todd and me to create a suspended artwork for the Digital Culture Walkway next to Stauffer Building,” Neubauer said. “Thanassis had liked the Photo-luminescent Sound Garden, a temporary commission that had been installed in 2010 at the Scottsdale Civic Center Bell Tower. As first we looked into adapting components from the Sound Garden, but realized that we would need to create an entirely new piece, specific to the walkway site.

“The task was to activate the rather dark and featureless walkway. We needed to brighten this long, rectangular space with a field of lights, many more than were at the Bell Tower. We came up with the idea of the field as a Meadow, consisting of flower-like light-forms made of stacked laser cut contours on light tubes with magnifying lenses.

“We also developed a color palette and a sequence of five differing blossom-like- but retro-futuristic, light-forms of various sizes and proportions. Conceptually, we both liked the idea of the way a breeze blows through a meadow, coursing through the grasses and plants, to polling and dissipating, revealing the movement of the wind.”

“Sensory Meadow” is tied to several websites that monitor environmental data, such as temperature, humidity and water-flow data, and create sounds related to the changes in conditions.

One of the sounds emulates the first “singing” done by a computer and is “my homage to computer pioneer Max Mathews,” Ingalls said.

Mathews, an electrical engineering, worked at Bell Labs, where he wrote MUSIC, the first widely used program for sound generation. Mathews, in 1961, wrote an accompaniment to a computer-synthesized singing voice that was used in “2001: A Space Odyssey.”

Even though “Sensory Meadow” is an experiment in expressing streaming numerical data through sound and light, it also is an experience of pleasure and surprise.

“The more people and movement that the motion detectors sense, the more active the artwork becomes,” Neubauer said. “The concept explores the idea of creating artworks that have their own sensory capacity, and can offer a response back to the viewer.

“We like that the artwork seems to make people happy, and we often see people moving or dancing under the lights.”

Ingalls said the original intention was to have “Sensory Meadow” up for six months, but it’s still there keeping its watch on passers-by.

It’s a low-power installation that uses LED lights, so perhaps it will get to stay.

“Sensory Meadow” adds a sense of play to the campus by day, and drama in the dark. Ingalls said it’s “much more interesting at night.”

ASU community members should conduct university business by Sept. 19 due to the PeopleSoft outage, Sept. 20–25.

The ASU University Technology Office reminds ASU community members to conduct university business by Sept. 19 due to the PeopleSoft outage Sept. 20–25. During this time, access to many online services delivered through My ASU will be limited.

In many cases, you will be able to view your information but not make any changes to it. Here are some examples:

You will not be able to:

You will be able to:

Review how you will answer staff and customer questions during the outage. Remember to finish any university business by Wednesday, Sept. 19. You will not be able to make changes until after the upgrade has been completed.

Stay in the know

Outage information can be found on the following web pages:

The PeopleSoft upgrade is the first major one to the system since it was installed at ASU in 2006. The upgrade is necessary to ensure that the university continues to receive regulatory, legislative and tax-software updates for important student and human resources systems.

If you have questions about the PeopleSoft outage, use the link in the Quick Links box on the peoplesoft.asu.edu page.