Futuristic robots may be coming soon to an ocean near you. Sensorbots are spherical devices equipped with biogeochemical sensors, that promise to open a new chapter in the notoriously challenging exploration of earth’s largest ecosystem – the ocean.

The devices are being designed and developed in the laboratory of Deirdre Meldrum, senior scientist and director of the Center for Biosignatures Discovery Automation at Arizona State University’s Biodesign Institute. 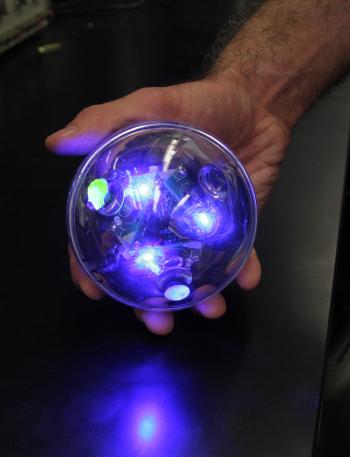 Much of Meldrum’s genomic research focuses on deep ocean environments and leverages her extensive technology development for human health and disease. In 2001, her group was awarded an $18 million grant for a National Institutes of Health Center of Excellence in Genomics Science, which led to the establishment of the Microscale Life Sciences Center (MLSC) – currently headquartered at the Biodesign Institute in the Center for Biosignatures Discovery Automation. (The MLSC grant was subsequently renewed for an additional $18 million.)

Meldrum’s center brings together researchers in electrical, mechanical, chemical, and bio- engineering, chemistry, computer science, materials science, laboratory medicine and microbiology as well as personnel from the Fred Hutchinson Cancer Research Center, University of Washington and Brandeis University. Together, they work on developing microscale devices to analyze cells and their DNA, RNA, and proteins to understand and eventually diagnose or prevent diseases such as cancer and inflammation.

To accomplish this, Meldrum and her colleagues develop microscale modules to measure multiple parameters in living cells in real time in order to correlate cellular events with genomic information. As Meldrum explains, the Sensorbot project significantly expands the scope of oceanographic investigations carried out by Biodesign’s Center for Biosignatures Discovery Automation:

“We are leveraging our automation, sensors, biotechnology, and systems expertise to develop unique robots that can be deployed by the hundreds, travel in formation, and communicate together for exploration and discovery. The Sensorbots will enable continuous spatiotemporal monitoring of key elements in the ocean and the ability to respond to events such as underwater earthquakes and hydrothermal vents. Such research is essential for a more thorough understanding of the multiple systems in the oceans – microbes and other sea life, geology, and chemicals.”

Cody Youngbull and Joseph Chao, assistant research professors, are both integral members of the Sensorbot team and have spent years developing the technology. Much of this creative tinkering has taken place in the labs at Biodesign, situated in landlocked Arizona. But in the summer of 2011, Youngbull took the Sensorbots to the deep ocean, aboard the Thomas G. Thompson, a global-class research vessel operated by the University of Washington, as part of UNOLS (University-National Oceanographic Laboratory System) and used as part of the National Science Foundation’s Ocean Observatories Initiative.

The ambitious Sensorbot project is utilizing the National Science Foundation’s Ocean Observatories Initiative – in particular, the Regional Scale Nodes (RSN) project, led by John Delaney, professor at the University of Washington. This far-flung endeavor involves the construction of a cabled underwater observatory in the northeast Pacific Ocean, off the coasts of Oregon, Washington, and British Columbia on the Juan de Fuca tectonic plate. This area is home to many dramatic undersea features, including volcanoes and hydrothermal vents – wellsprings of unique life forms.

The cabled observatory provides high bandwidth and power for real-time oceanographic observations and experiments. These include the study of mineral concentrations, gas compositions, biological blooms, and detailed analyses of extremophiles – organisms flourishing in environments usually considered inhospitable to life. The cabled observatory with high power and bandwidth provides the Sensorbots with the ability to recharge their batteries and download their data, allowing immediate transmission via the internet and making the information available to scientists and educators anywhere in the world.

The current Sensorbots are fist-sized transparent robotic orbs, which communicate via brilliant blue flashes of light. The spheres house electronics and batteries, while their surfaces have three sensors for measuring pH, temperature or oxygen. Sensorbots report surrounding environmental conditions to the inner electronics that convert the signal into flashes of light, providing a sort of visual Morse code.

A high-speed camera situated on the seafloor picks up the signals and stores them for later decoding aboard the ship. As sensorbot technology develops, these orbs may blanket large areas of the ocean and transmit information regularly to a central data hub. Ultimately, Sensorbots will be capable of operating in semi-autonomous robotic swarms, moving under remote control, in a 3D geometric formation through precisely controlled volumes of seawater.

Sensor swarms operating autonomously could function in complex, harsh, and remote environments. With appropriate microanalytical systems mounted on the Sensorbot platforms, these synthetic mariners could perform spatially and temporally indexed genomic analyses of microbial communities, as well as observing a broad variety of macro events.

As Youngbull explains, the Sensorbot technology has undergone several stages of development. “We’ve built 3 versions of Sensorbots over the years and now we’re moving on to a fourth,” he says. "This latest iteration – known as p3N – will function independently and provide networking capabilities, allowing members of the swarm to communicate with each other. The optical signals transmitted by the Sensorbots will be linked, using so-called multi-hop networking technologies, not unlike those used for cell phone and other land-based wireless networks."

“Sensing webs are an exciting thing,” Youngbull says, “because the scale of phenomena are vast in the oceans.” Rather than delivering a very expensive robot to a single point in space and then serially moving it around, often missing dynamic phenomena, an array of inexpensive Sensorbots can cover a wide field, permitting real-time investigations of earthquakes, biological blooms, and other episodic phenomena.

“Networking will allow us to trail sensorbots like a string of pearls over great distances – so we’ll get all the benefits of optical communication speed and energy efficiency without the detriment of optical loss and attenuation in sea water,” Youngbull says.

During the most recent research cruise, Youngbull helped position the Sensorbots on the seafloor, with the aid of ROPOS – a Canadian remotely operated vehicle. The Sensorbots were deployed to a crushing depth of over 1500 meters in and around a hydrothermal vent field in the cauldera of an undersea volcano. Twenty Sensorbots were deployed over hundreds of square meters and monitored continuously for three days using a high speed underwater camera.

The new p3N sensorbots currently under construction will have inertial monitoring units, allowing them to sense when and where they have been moved. Eventually, the devices will have their own onboard propulsion systems, allowing them to be controlled independently from afar. The challenges of creating such systems are significant. Initially, sensorbots may be designed to automatically adjust their buoyancy to take advantage of the natural movements of ocean current.

The group will be continuing their Sensorbot experiments in a new undersea cabled environment belonging to the Monterey Bay Aquarium Research Institute (MBARI). While the team’s focus will be on undersea microbial research, the concept of a multi-hop capable node, that functions to detect many different analytes in an inexpensive, compact format has other potential applications, including national security, epidemiology, and contaminant plume monitoring.

In addition to MBARI, the Center for Biosignatures Discovery Automation collaborates with other schools at ASU, including the School of Earth and Space Exploration and the Global Institute of Sustainability.

“Nobody brings it all together like we do, with the sensors, the embedded systems, the data transfer and communication,” Youngbull says. Meldrum is very enthusiastic about the use of this technology for advancing science in previously inaccessible realms of the deep ocean: “Sensorbots will provide a continuous presence in the ocean over space and time, from nanometers to kilometers and nanoseconds to years, enabling us to discover and understand the complex biogeochemical systems of our oceans that play a key role in our quality of life.”

Keala King scored 16 for the Sun Devils, but in the end ASU lost 64-61 to the Golden Eagles.

Darnell Dodson sank a 3-pointer at the buzzer to give Southern Mississippi a 64-61 victory over Arizona State on Monday night.

Arizona State rallied from 11 down in the final four minutes to tie it on two free throws by Keala King with five seconds to go. Dodson took the inbound pass, dribbled downcourt and let it fly from about a foot behind the 3-point line.

Torve Pelham of Southern Mississippi and Arizona State's Ruslan Pateev were ejected after a flare-up with 12:14 remaining. Pelham had 10 rebounds at the time.