There are plenty of things that could keep U.S. Secretary of Homeland Defense Jeh Johnson up at night – use of weapons of mass destruction, terrorist and cyber attacks, and protecting our borders – but how to fund and maintain the third-largest department in the U.S. government is among his chief concerns. 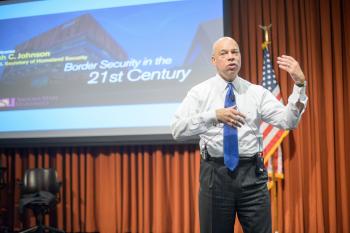 Johnson made a surprise visit to ASU's Walter Cronkite School of Journalism and Mass Communication on the Downtown Phoenix campus on Jan. 28. He was there to deliver remarks on “Borderland Security in the 21st Century,” to approximately 140 students who study journalism, criminology and public policy.

The Homeland Security chief was in Phoenix to view the Department of Homeland Security's security operations surrounding Super Bowl XLIX and to participate in workforce engagements with U.S. Customs and Border Protection Personnel. Johnson said he consulted with U.S. Senator John McCain before he departed for Arizona on where to deliver his speech.

“Senator McCain told me, 'The Cronkite School,'" Johnson said. "So here I am.”

Johnson said the Cronkite name personally resonated with he and his family because he grew up watching the CBS news anchor in New York during the 1960s and 1970s.

“If we heard of something tragic happening during the day, well, it didn't really happen until Walter Cronkite said it happened,” Johnson said. “That's how much he meant in my household growing up.”

Johnson is hoping that his word is as good as Cronkite's when it comes to public perception that our borders are less secure than they were in 2003, when his department was created by the federal government. To prove his point, Johnson presented audience members with a chart of immigrant apprehensions from 2000 to 2014. The numbers were cut dramatically from 1.6 million in 2000 to approximately 479,000 in 2014.

He cites the reason for the decline is due to better policing and enforcement – more than 20,000 agents, construction of 90 miles of primary and secondary fences along the U.S.- Mexico border, deployment of more sensors, aircraft and a variety of surveillance systems since 2000.

All of that enforcement, Johnson says, takes approximately 250,000 personnel and money to secure the country's air, sea, land and space, to the tune of $60 billion a year, which is his department's annual budget. However, he said that the department is funded on a contingency basis, set to expire Feb. 27, and is calling on Congress to increase funding for his department and on a more permanent basis.

“Everybody in Congress is telling me we've got to do something,” Johnson said. “I cannot print money and I cannot appropriate money. I need a partner in Congress.”

To underscore his point, Johnson said his agency asked for close to $4 billion in emergency funding to pay for the surge of immigrant children in the Rio Grande Valley, but Congress refused. He said Homeland Security was forced to shift more than $400 million from the disaster relief fund and the Transportation Security Industry to make ends meet.

“Fortunately we had a good weather year last year, but I do not assume that we're going to be that lucky this year,” Johnson said.

Johnson ended his 45-minute lecture by imploring students to consider a career in public service.

“It's one of the noblest things you will ever do, and it has been a great career,” Johnson said. “Some of the best people I've ever known are in public service.”

Arizona State University and the Thunderbird School of Global Management celebrated their new alliance Jan. 29 at a reception on the Glendale, Arizona, campus of Thunderbird.

Arizona State University and the Thunderbird School of Global Management celebrated their new alliance Jan. 29 at a reception on the Glendale, Arizona, campus of Thunderbird.

ASU President Michael M. Crow and Allen J. Morrison, chief executive officer and director general of the Thunderbird School, spoke about how each school would enhance the other.

“Thunderbird’s partnership with ASU comes at just the right time in our growth and in our history,” said Morrison. “In addition to benefiting from ASU’s knowledge network, we move forward at Thunderbird unburdened by debt and with a license to grow, to spread our wings, to prosper.”

The reception marked the formal kickoff of the partnership between ASU and the Thunderbird School that was finalized in December 2014. The partnership aims to combine the strength of an international business-education powerhouse with the resources of an innovative public research university.

Crow congratulated Thunderbird for its successes and promised to be a part of building an even more impactful future for the school.

Ambassador Barbara Barrett, who at one time served as president of the Thunderbird School, called the partnership “a history-making combination,” comparing it to such historically successful pairings as Watson and Crick, who discovered the double helix structure of DNA; Gilbert and Sullivan, famous theatrical partners; and Lewis and Clark, who made history when together they mapped and explored the newly acquired western portion of the United States in 1804.

“Combinations, teams, collaborations have supercharged performance for eons. This combination bodes well for the future of ASU and for Thunderbird,” said Barrett. “The ASU-Thunderbird combination gives Thunderbirds the benefit of a remarkable leader in Michael Crow. With the size and strength of ASU on Thunderbird’s side, Thunderbird will become an even finer institution, building upon its incomparable legacy.”

In his speech, Morrison pointed to new technologies, degree programs, international expansion, company partnerships, broadening of the faculty and networking more meaningfully with alums as ways that the Thunderbird School will benefit from this partnership.

“This new beginning with ASU signals the start of an era of unparalleled growth and unparalleled opportunity for Thunderbird,” he said.

Morrison previously served as a senior adviser for global management education and executive education initiatives at ASU. His research has been published in a range of journals, including Harvard Business Review, Strategic Management Journal, Sloan Management Review, Journal of Management and the Journal of International Business Studies.

President of the Thunderbird School of Government and MBA student Sabah Hussain has been taking programming classes at ASU for the past three years. She expressed excitement at the two schools’ collaboration.

“The resources that we’re going to get at ASU are only going to bolster our opportunities,” Hussain said.