Heat-cracked mud plaques crisscross a vast, dry riverbed in Mexico where the Colorado River once churned. A view that caused a Cocopa elder to recount, “When the river began to dry out, we had to dig for water. The next year, we dug deeper. The next, deeper still ... but what we found was salty.”

It is hard to imagine the Colorado River, whose headlands start in the Rocky Mountains and serve more than 36 million users in the U.S., running dry. However, by the time the remaining 9 percent of the original flow meets the Morelos Dam in Mexico, 90 percent of the riparian areas have vanished, and native fish, once plentiful, are now endangered, said Yamilett Carrillo, director of the Colorado River Delta Water Trust. 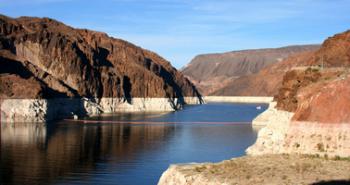 This scarcity isn’t just being experienced by an indigenous community, which once flourished in wet reeds of the delta in Mexico. Similar concerns are echoed upstream by the white water rafting business owner on the San Miguel River, a tributary of the Colorado, whose trips have fallen over time from 40 to zero, and reflected in the choices made by cities and agricultural communities across the West.

“We've got at least a year, maybe two years, before we start seeing (water) shortages in Arizona," states Michael Cohen, senior research associate at the Pacific Institute. “More water is allocated each year from the Colorado River than flows into the river.”

Cohen and Carrillo were two of eight experts who spoke at the American Association for the Advancement of Science – Southwestern and Rocky Mountain Division (AAAS SWARM) sponsored water forum “Adapting to a water-stressed West,” held at ASU. The forum gathered some of the top water resource professionals, scientists and policy experts in the western U.S. and Mexico to discuss the freshwater challenges created by overuse, inefficiencies, land use, changing climate and increasing demand from booming populations.

“We can’t just keep doing what we’ve been doing,” said ASU professor Michael Hanemann of the historic trend to divert, dam and pump our region’s water. “People need to realize that water is not free.”

What is water worth?

Americans pay less for water than for cell phones or cable television, but infrastructure costs money and has to be built before a single drop of water is delivered. Meeting that demand also means raw energy – more than 20 percent of all electricity in California is consumed to pump water to match up with supply needs. Now imagine powering a brackish water desalinization plant or diverting water from the Missouri River to supply Denver, Colorado, suggested Cohen.

While outcomes can be dire, forum experts agreed that there are ways to trim our personal torrents to trickles. In fact, many in Arizona have supported water conservation without recognizing their impacts – from investing in drip irrigation and planting of xeriscapes to eating baby lettuce.

How can lettuce choice turn the tide on water use? Consider this: agriculture can consume 60-80 percent of local water supplies. In Yuma, the lettuce capital of the Southwest, growers are switching from traditional head lettuce to baby lettuce to cut water use, crop waste, labor and pesticide use, said Michael Glennon, Regents' Professor and Morris K. Udall Professor of Law and Public Policy in the Rogers College of Law at the University of Arizona. But the primary driver of the shift is premium pricing on grocery shelves, he says.

Three other ways that you can create change, besides baby lettuce are:

1. Replace your toilet. “We have a real problem with the flush toilet,” states Glennon. “A full one-third of all the water people use gets flushed down the toilet. That’s more than 6 billion gallons a day to flush waste.” Alternatives range from high efficiency dual flush to low flow or composting toilets.

2. Less turf, said Cohen, pointing to Las Vegas, where authorities forged the first lawn removal rebates. More than 165.6 million square feet of grass was pulled up – a savings of more than 9.2 billion gallons of water. Such savings, in turn, inspired Los Angeles to pay residents up to $2 a square foot, and up to $3 a square foot in Long Beach to tear out turf.

3. Water harvesting or creating incentives in communities to cut waste, such as in San Antonio, Texas, where water cops issue 200 citations a week for water waste.

Complexity of water in the West

One difficulty in tackling concerns about water across six states and scores of water districts is that there is not a one-size-fits-all solution. Take for example the issue of water harvesting. It’s become trendy in new developments in California and reflects smart thinking in Arizona, but it is actually illegal in Denver, because of laws related to watersheds and water rights.

There are also historic complexities about water resource management, explained ASU School of Sustainability professors Rimjhim Aggarwal and Hanemann, who is also the director of the Center for Environmental Economics and Sustainability Policy with the W. P. Carey School of Business. Management of water arose over time, piecemeal, as the West was settled, said Hanemann. Numerous water districts, public and private groups tap into water supplies, from wells and rivers to the Central Arizona Project (CAP).

Aggarwal drove this point home by laying out a grid of local districts and their water allocation. In Buckeye, the district eschewed CAP water, mixing pumped groundwater with other sources, such as the Buckeye canal, that ties to the Gila and Agua Fria rivers. Likewise, water pricing is variable, from $13 an acre-foot through Salt River Project, to nearly $40 an acre-foot in the Roosevelt irrigation district.

Some forum experts felt that market forces could help in the management of supply and use – through grocery shelves, water taxes or pricing schemes that propose a “more-you-use, more-you-pay” approach. However, people in general feel more passionately about water than other goods, said Hanemann. “There is hostility to price increases and concerns about the economically disadvantaged that couldn’t afford water.”

In less developed settings, such as overseas, these questions are further complicated by lack of markets and prices that don’t reflect scarcity, even when markets do. Add to that lack of property rights, taxes or subsidies, said Aggarwal, who has served as a senior consultant for the United Nations and World Bank.

The forum made one thing clear: the discussion about water is a growing, living framework. Water can be moved around and clouds can be seeded, but climate change and meteorology must also be understood and accounted for; because what happens in the upper basin near the headwaters of the Colorado River also impacts downstream states and Mexico.

Stories can also change minds, inform and preserve a way of life, believes Kaard Bombe, a student with ASU’s Walter Cronkite School of Journalism and Mass Communication and one of six members of The Colorado River Re-Storied project. Collecting oral histories can tell tales of shortage, traditional practices and offer a pathway to preserve the future. Stories can also change the course of a career and a region, as it did for Yamilett Carrillo, who cites her conversation with the Cocopa elder in Mexico as a turning point in her career and life.

Carrillo heads the water and wetlands program with Pronatura Noreste. She also directs the  Colorado River Delta Water Trust, a nonprofit also supported by Environmental Defense Fund and Sonoran Institute, to link wetland restoration with better water use efficiency in agriculture and water markets, using the existing legal framework in Mexico to dedicate environmental flows to restore the delta.

“It used to be that Mexico believed lack of water was due to the U.S. holding water back,” said Carrillo. “Collaboration has allowed us to understand the management of the river upstream, where the threats are, and develop the sharing of surplus and shortage basin-wide.”

Studies by ASU experts Hanemann, Aggarwal and John Sabo and Enrique Vivoni in the College of Liberal Arts and Sciences, along with networking with scientists, water resource managers, students and the public are already helping to shift the future course of the Colorado River. Organizations like the National Geographic Society and other partners have also launched public efforts, such as the Change the Course campaign. More than 66,000 people have pledged to restore more than 13 million gallons of water to the Colorado River basin, so it again reaches Mexico’s Gulf of California.

How would you conserve water? Let us know! Tweet us: #aaaswater @asuCLAS.

To learn more about the speakers and listen to forum sessions videos, go here.

ASU's Project Humanities stepped into the national spotlight again and was recognized today by a leading higher education organization for its innovative effort to engage communities with the arts and sciences.

ASU’s Project Humanities stepped into the national spotlight again and was recognized today by a leading higher education organization for its innovative effort to engage communities with the arts and sciences. 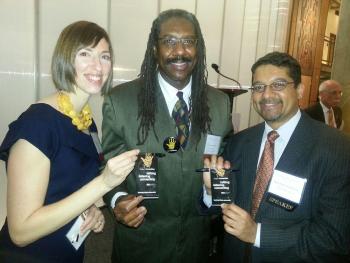 “Project Humanities received unanimous support in our selection process for its leadership in local and national conversations about the breadth, depth and value of the humanities across disciplines,” said John Churchill, secretary for The Phi Beta Kappa Society. “Project Humanities is successfully blending academic research, community outreach, student development and interdisciplinary approaches in compelling frameworks created by and enjoyed throughout the community. We applaud their vision and believe their efforts deserve Phi Beta Kappa’s national spotlight.”

The Phi Beta Kappa Society was founded in 1776 and is the oldest and most widely-known academic honor society in America. It celebrates and advocates excellence in the liberal arts and sciences, and has over half a million members and chapters at 283 American colleges and universities.

Neal Lester, who helped to create and has directed Project Humanities since its inception, accepted the award and a $5,000 cash prize to support continued work.

“The pursuit of meaningfulness, integrity and truth is at the heart of the work of Project Humanities, and we are committed to finding common ground where talking, listening and connecting do matter,” said Lester, who is a Foundation Professor of English. “Humans flourish when we accept that we are not the center of the universe and that one measure of success is accepting a life grounded in generosity, service, selflessness and possibility.”

ASU’s Project Humanities is a university-wide initiative that promotes and showcases the range, relevance and diversity of faculty and student humanities research and outreach. With both a national and international presence in conversations about the role, impact and importance of humanities study, content, courses and multidisciplinary collaboration, Project Humanities sponsors or co-sponsors approximately 100 programs a year. Themed bi-annual kick-offs, such as “Perspectives on Place”; “Are We Losing Our Humanity?”; “Heroes, Superheroes and Superhumans”; and “Humor…Seriously,” have featured high-profile guests and scholars, student and community participation, and have garnered national attention.