Event to help launch ASU's Center for Science and the Imagination 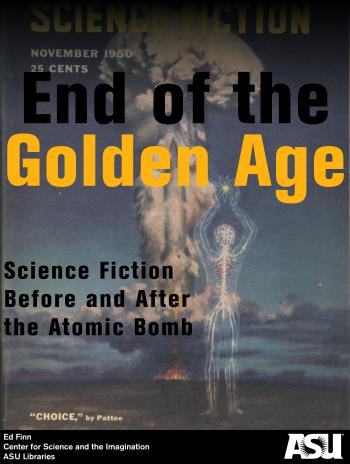 The first event is the opening of “End of the Golden Age: Science Fiction Before and After the Atomic Bomb,” a new exhibit at ASU’s Noble Science Library. The opening takes place from 1-2 p.m. in the Noble Library’s front lobby, and the exhibit will be on display in the library through Oct. 12.

The exhibit chronicles the emergence of the modern genre of science fiction in the pages of Astounding Science-Fiction in the late 1930s and early 1940s. It features original fiction from ASU Libraries’ Special Collections by Isaac Asimov, Robert Heinlein and others, along with materials from ASU’s collection of Alan Dean Foster’s papers.

During the opening event, Foster will give a short talk about working with the legendary science fiction editor John W. Campbell, and guests will be able to tour the exhibit and converse with the author in a relaxed, low-key environment.

The second event is the launch of the Science Fiction TV Dinner Series, a series of science fiction television show screenings and discussions hosted by ASU’s Center for Science and the Imagination that will recur throughout the year. The event also takes place from 5:15-7 p.m., Sept. 12, in Bateman Physical Sciences Center F-123.

The event features the Star Trek: The Original Series episode “Arena,” based on a short story by the famed science fiction writer Frederic Brown. Following the screening, Foster and ASU’s Braden R. Allenby, Lincoln Professor of Engineering and Ethics, professor of civil and environmental engineering, and professor of law will discuss the episode and its implications for cultural conversations about science, exploration and encounters with the Other.

The Science Fiction TV Dinner series is designed to provide spaces for transdisciplinary conversations about science, technology and possible human futures. The series pairs classic and contemporary science fiction television shows with open discussions that engage scientists, humanists and artists in key issues around scientific inquiry, the social and cultural impact of technological advances and the kind of future that we want to create.

“We are thrilled to welcome Alan Dean Foster to campus,” notes Ed Finn, director of the Center for Science and the Imagination and assistant professor in the School of Arts, Media and Engineering and the Department of English. “He represents a living connection to the Golden Age of Science Fiction as well as the cutting edge of contemporary storytelling across film, television, fiction and non-fiction.”

Both events are presented by the Center for Science and the Imagination, the ASU Libraries and Project Humanities. The events are part of the Project Humanities fall kickoff, which features a series of film screenings, scholarly conversations, public forums and other events confronting the question, “Are We Losing Our Humanity?”

The Center for Science and the Imagination is a new initiative at ASU that brings writers, artists and other creative thinkers into collaboration with scientists, engineers and technologists to reignite humanity’s grand ambitions for innovation and discovery. To learn more about the Center and its official launch event on Monday, Sept. 24, visit http://csi.asu.edu/launch.

The largest class of ASU freshmen engineering students boasts many with notable achievements and big aspirations..

A stellar, record-breaking class of freshman has entered Arizona State University’s Ira A. Fulton Schools of Engineering for the fall 2012 semester. It’s not only the largest in number but one of the most academically impressive.

More than 1,500 freshmen were enrolled on the first day of classes – the most ever for ASU’s engineering programs, breaking the previous record of 1,276 a year ago. 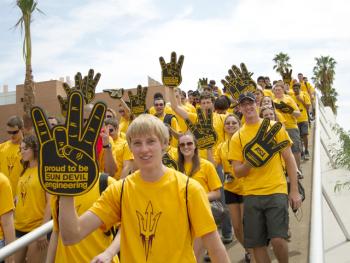 One of out every five of the new freshmen has been accepted into ASU’s Barrett, The Honors College.  The 317 freshman engineering honors students are an increase of more than 30 percent from last year. That helps give ASU’s engineering schools one of the highest overall percentages of honors students in any program at ASU.

More than 40 percent – 644 freshmen – have earned Arizona merit scholarships. Forty of them have earned National Merit Scholarships and 20 are National Hispanic Scholars.

The number of females in an ASU freshman engineering class has exceeded 20 percent, with an increase to 317 this fall from last year’s count of 236 female freshmen students (18.5 percent of the 2011 freshman class).

In addition, compared to a year ago there has been a 36 percent increase in the number of Hispanic freshman and nearly a 30 percent overall jump in the number of freshmen from groups that are underrepresented in engineering professions.

Susan Sajadi’s experiences early in life have led her to choose engineering as a major.

“I decided to focus on biomedical engineering, because as a child I had pneumonia several times and spent a lot of time in the hospital,” Sajadi explains.

“To give back to who those who helped me, I started volunteering at a hospital three years ago. I've loved it. I got the opportunity to play with one of the surgical robots, and since then I knew that I wanted to be a part of creating new technologies in the medical field.”

She’s considering medical school as a next step after earning a biomedical engineering degree.

“I think there are so many health issues today that need engineering solutions,” Sajadi says. “I would love to make contributions to the medical field and make medical procedures easer to help those who will face the same illness that I did, or the illnesses faced by the people next to me in those hospital beds.”

James Boulton says his longtime fascination with technology combined with his affinity for math and science led him to choose an aerospace engineering major.

Beyond gaining the skills that will open up job opportunities, among Boulton’s important goals for his time at ASU include making “lifelong friends and connections” that will be valuable to him in and beyond his career.

Civil engineering major Wesley Scatena from Surprise, Ariz., is already to looking ahead to 10 years after earning his degree. By then, he says, he hopes to be opening his own civil engineering business.

To lay the ground work for reaching that goal, Scatena is planning to participate in a number of student engineering and technology competitions throughout his undergraduate years, and to obtain internship positions that will enable him to learn about the business side of the engineering profession.

Scatena already has a jump-start. This fall semester he will continue an internship he began during the summer with the Arizona Department of Transportation.

Dalton Osmanski, an aerospace engineering major, says he wants to follow in the footsteps of his father, who is an airplane mechanic.

“I’ve had an interest in airplanes since I was young,” says Osmanski, who comes to ASU from Chicago. He would like to help make improvements in fighter- jet technology and gain expertise in aerodynamics so that one day he can broaden the possibilities for the human experience of flight.

At ASU he hopes to “explore new careers and to find out what it takes to get involved in something bigger than myself.”

His decision about where to go to college was based in part of the size of the institution and its variety of academic programs.

“I feel ASU will be a great place to get my education because there are so many other subjects to study if my Plan A has to change,” he says.

Kathleen Farrell, from Spokane, Wash., has chosen a biomedical engineering major with thoughts of a career in medicine, but she’s also interested in helping develop renewable energy sources and in water conservation efforts.

“I don’t have it all completely figured out. My interests are all across the board,” Farrell says. She expects that eventually “something will catch my eye and then I will know exactly what I want to do. So until then I will continue school with an open mind.”

She does know she wants to join a sorority and become active in ASU’s chapter of the Society of Women Engineers – and that she chose ASU because of the “incredible engineering program.”

Alex Tower, from Reno, Nev., recalls becoming interested in engineering when he was middle school. Now he plans on using a college degree in aerospace engineering to attain his goals of becoming an officer in the Marine Corps and working in the aviation industry.

So far, Tower says he feels confident he’s found a school that will help take him there. “ASU has a great engineering program and the support from within the engineering community has really impressed me,” he says.

Deanna Weathers-Perez also has military service on her agenda. She’s in the Air Force Reserve Officers Training Corps and plans to complete the program at ASU while she earns a biomedical engineering degree.

Her father is in the Army, so the family has lived in many places, including Italy, Washington, North Carolina and Georgia. “I’m used to moving around,” she says. So she decided to head west and found ASU offers what she is looking for in a college education.

“I am in love with math and science, so it was not hard deciding on engineering for my major,” Weathers-Perez says. She sees herself contributing to advances in medical technologies, specifically X-ray imaging.

Biomedical engineering major Aimen Vanood has her eye on a career as a physician. She hopes to get opportunities to volunteer at local hospitals during her undergraduate years at ASU.

An engineering degree and volunteer experience “will help me become a more well-rounded person with a broad scope of skills,” and thus a better candidate for medical school, Vanood says.

She plans to explore branches of the medical field that focus on helping people living with disabilities to overcome their physical challenges.

Engineering at an early age

Logan Haman, an industrial engineering major from Chandler, Ariz., says his “childhood passions made choosing an engineering major easy for me. Growing up I always loved taking things apart and putting them back together, as well as solving all kinds of problems.”

At ASU, he wants to apply his education by contributing to community projects and taking advantage of opportunities for undergraduates to conduct research.

Mechanical engineering major Esteban Morales, from Prescott Valley, Ariz., also says he set himself on a path toward engineering at a young age.

“Ever since I was a little boy I would take apart my broken radio-controlled toys and figure out how to fix them.” Morales says. “I would do this with any toy that involved movement, so it was a natural decision for me” to major in engineering.

At ASU he “would love to be a part of some kind of great engineering project” with fellow students. In his future career, he’d like to use his engineering skills to help the country develop more sustainable energy resources.

He’s also looking to overcome a challenge common to many university freshman.

“I would like to be able to become more outgoing,” he says, “since I’m a relatively shy person.”