The National Center on Disability and Journalism at Arizona State University is accepting entries for the second annual Katherine Schneider Journalism Award for Excellence in Reporting on Disability.

Administered by the National Center on Disability and Journalism at the Walter Cronkite School of Journalism and Mass Communication, the Schneider Award is the first national journalism contest devoted exclusively to disability coverage. The award is made possible under a grant from Katherine Schneider, a retired clinical psychologist who also supports the Schneider Family Book Awards operated by the American Library Association.

The first-place winner is awarded $5,000 and receives an invitation to speak at the Cronkite School. The second-place winner receives a $1,500 award, and additional honorable mention awards of $500 may be given at the discretion of the judges.

“People with disabilities make up nearly 19 percent of the U.S. population,” said Kristin Gilger, center director and associate dean at the Cronkite School. “This contest recognizes the outstanding work of professional journalists who are providing visibility to important disability issues.”

Last year, Ryan Gabrielson, a reporter for The Center for Investigative Reporting’s California Watch, won the inaugural Schneider Award for a series exposing the routine failure of police to protect the developmentally disabled at California care institutions. The award-winning package of stories, “Broken Shield,” included an accompanying animated video by Carrie Ching and Marina Luz.

The second-place award in last year’s contest went to Gareth Cook for his New York Times Magazine piece, “The Autism Advantage.” Two honorable mention prizes were also awarded. They went to Daphnée Denis and Hoda Emam for a video documentary, “Playing by Ear.” The second honorable mention award went to Broughton Coburn for a long-form piece he wrote for Dartmouth Alumni Magazine, titled “Second Chapter: A Portrait of Barry Corbet.”

“The journalistic skills displayed by last year’s winning entries were awesome,” Schneider said. “There were lots of good entries, and we're hoping for even more this year as the award becomes better known. It's worth entering for the possible chance of winning an opportunity to speak at the Cronkite School, to say nothing of the prize money.”

Kunowski, who graduated in 2011 with a bachelor’s degree in integrative studies from ASU’s New College of Interdisciplinary Arts and Sciences, launched Illumin8 in 2010. The company’s portable signage platforms use LED technology to create attractive, highly visible signage products that range from informational and directional signage to revenue-generating advertising platforms. 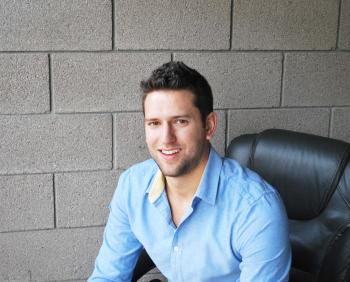 “I am honored to be the recipient of this prestigious award,” Kunowski said. “It is a great feeling to be recognized for the hard work that has gone into building this business.”

Kunowski first came up with the concept for Illumin8’s signage while driving one evening. He noticed that it was difficult to see advertising signage in the dark, and he set out to develop an innovative product to solve that problem. Using LED technology, he created illuminated signage products that are highly visible, even in the dark.

With support from ASU’s Edson Student Entrepreneur Initiative, a startup accelerator in the university's Office of Knowledge Enterprise Development that provides funding, office space and mentorship to ASU student startups, Kunowski set about making his idea a reality. He received a $10,000 grant from the Edson initiative, which allowed him to develop a commercially viable product. After several months of development, he made his first sale, to the Phoenix Suns.

“I am grateful to Arizona State University and the Edson initiative for taking a risk on my business back when it was just a concept in 2010,” Kunowski said. “Their continued support has helped get Illumin8 where it is today.”

Illumin8 has grown considerably since that first sale. The company’s current clients include Anheuser Busch, the MGM Grand Resort and Casino, Live Nation, the Arizona Diamondbacks, the Phoenix Suns, US Airways Center, Maya Day and Nightclub, and more. Most recently, Illumin8 struck a deal with CBS Corp. to provide LED promotional signage outside of the CBS Television City Research Center in Las Vegas.

Kunowski, who was honored at a ceremony in May, has also been awarded a spot in the SBA’s 2014 Emerging Leaders initiative, an intensive training program for small companies that have the potential for quick growth and job creation. During the seven-month program, he will work with experienced mentors, attend specialized workshops and develop connections with peers, city leaders and the financial community.

"It is no surprise to me that Jeff is being honored as Arizona’s Young Entrepreneur of the Year,” said Linda Persau, a faculty member in the New College’s Integrative Studies Program. “He is outstanding among his peers in his ability to both network and multitask effectively to reach parallel goals. He has an ability to truly focus on what he wants and then put in the time to create it. Jeff is a visionary who can make things happen."

Kunowski has received numerous accolades since founding Illumin8. While at ASU, he was a recipient of the Crown Innovator Scholarship, a scholarship for student entrepreneurs that was created by Insight Enterprises founder and ASU alumnus Eric Crown. In 2012, Kunowski was named one of The Arizona Republic’s “35 Entrepreneurs Under 35,” and he is a member of Sandbox, an invitation-only global network of millennial leaders and innovators.