A robotic toy car first developed as a class project is now the basis of a business startup by a group of Arizona State University engineering students.

They’re designing Cosmo – the car’s name – as a tool for teaching pre-school-age children basic math and spelling through games programmed into the robot’s software. 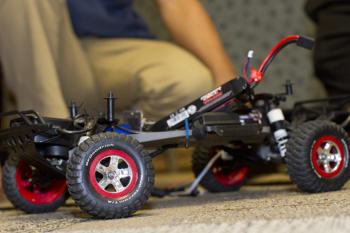 The venture, called Infinibotics, recently got a boost by winning support through the ASU Venture Catalyst program’s Edson Student Entrepreneur Initiative. The Cosmo team will receive some funding, along with business mentoring and office space during the 2013-2014 academic year.

Their faculty adviser is Aviral Shrivastava, an associate professor in the School of Computing, Informatics and Decision Systems Engineering, one of ASU’s Ira A. Fulton Schools of Engineering.

Infinibotics stems from an idea Shrivastava came up with two years ago to teach students in one of his senior capstone engineering design courses to apply basic computer systems engineering design principles to producing a robotic toy car.

Using image-processing algorithms, the students were first instructed to follow a person walking so they could understand the mechanics of what they wanted to enable the vehicle to do.

Students in the first class to undertake the project assembled the necessary components to make the car work. Another class developed the computer software for detection and tracking, enabling the car to follow behind someone as they walked.

Eventually, the remote-controlled vehicle could be directed to outmaneuver darts shot from a toy turret.

The students showcased the robot car at ASU’s annual Engineering Open House last spring and found that “children were loving the toy,” according to Cosmo team member Andert. One father asked if he could buy the toy vehicle for his son.

When Shrivastava’s five-year-old daughter, Lehka, played with the toy, she asked her father if the car could be made to stop when she told it to and if it could play spelling games with her.

Her questions and feedback from others who saw the robot at the open house sparked a new phase of the project – developing the robot car as an educational toy for children.

The students have already altered the robot’s software to enable it to follow voice commands such as “Cosmo, follow” and “Cosmo, stop.”

The Infinibotics team that formed to turn the project into a product is designing the next Cosmo prototype to provide more interactive features. Ideas include enabling the robot toy to play hide-and-seek and treasure-hunt games that present simple math and spelling challenges.

“It will require a lot more engineering on our part,” Andert says, “and that will probably take the better part of the next year.”

After that, the team will face manufacturing and marketing challenges. But winning support from the Edson Student Entrepreneur Initiative is a confidence builder, team member Holton says.

“When we found out that we won, it was an overwhelming feeling,” he says. “It felt so good that we stacked up well against the other teams” competing for Edson awards. “It really bonded our team together.”

Read more about Infinibotics and see a video of the Cosmo robotic car in action at http://aviral.lab.asu.edu/?p=1182

ASU's Paul Davies has proposed a new way to look at cancer by tracing its deep evolutionary roots to the dawn of multicellularity, more than a billion years ago.

A new way to look at cancer – by tracing its deep evolutionary roots to the dawn of multicellularity more than a billion years ago – has been proposed by Paul Davies of Arizona State University’s Beyond Center for Fundamental Concepts in Science in collaboration with Charles Lineweaver of the Australian National University. If their theory is correct, it promises to transform the approach to cancer therapy, and to link the origin of cancer to the origin of life and the developmental processes of embryos.

Davies and Lineweaver are both theoretical physicists and cosmologists with experience in the field of astrobiology – the search for life beyond Earth. They turned to cancer research only recently, in part because of the creation at Arizona State University of the Center for the Convergence of Physical Science and Cancer Biology. The center is one of twelve established by the National Cancer Institute to encourage physical scientists to lend their insights into tackling cancer. 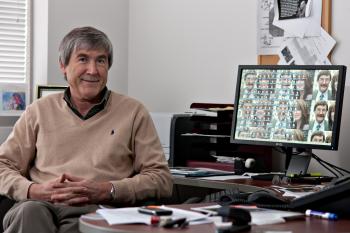 The new theory challenges the orthodox view that cancer develops anew in each host by a series of chance mutational accidents. Davies and Lineweaver claim that cancer is actually an organized and systematic response to some sort of stress or physical challenge. It might be triggered by a random accident, they say, but thereafter it more or less predictably unfolds.

Their view of cancer is outlined in the article “Exposing cancer’s deep evolutionary roots,” written by Davies. It appears in a special July issue of Physics World devoted to the physics of cancer.

“We envisage cancer as the execution of an ancient program pre-loaded into the genomes of all cells,” says Davies, an Arizona State University Regents' Professor in ASU's College of Liberal Arts and Sciences. “It is rather like Windows defaulting to ‘safe mode’ after suffering an insult of some sort.” As such, he describes cancer as a throwback to an ancestral phenotype.

The new theory predicts that as cancer progresses through more and more malignant stages, it will express genes that are more deeply conserved among multicellular organisms, and so are in some sense more ancient. Davies and Lineweaver are currently testing this prediction by comparing gene expression data from cancer biopsies with phylogenetic trees going back 1.6 billion years, with the help of Luis Cisneros, a postdoctoral researcher with ASU's Beyond Center.

But if this is the case, then why hasn’t evolution eliminated the ancient cancer subroutine?

“Because it fulfills absolutely crucial functions during the early stages of embryo development,” Davies explains. “Genes that are active in the embryo and normally dormant thereafter are found to be switched back on in cancer. These same genes are the ‘ancient’ ones, deep in the tree of multicellular life.”

The link with embryo development has been known to cancer biologists for a long time, says Davies, but the significance of this fact is rarely appreciated. If the new theory is correct, researchers should find that the more malignant stages of cancer will re-express genes from the earliest stages of embryogenesis. Davies adds that there is already some evidence for this in several experimental studies, including recent research at Harvard University and the Albert Einstein College of Medicine in New York.

“As cancer progresses through its various stages within a single organism, it should be like running the evolutionary and developmental arrows of time backward at high speed,” says Davies.

This could provide clues to future treatments. For example, when life took the momentous step from single cells to multicellular assemblages, Earth had low levels of oxygen. Sure enough, cancer reverts to an ancient form of metabolism called fermentation, which can supply energy with little need for oxygen, although it requires lots of sugar.

Davies and Lineweaver predict that if cancer cells are saturated with oxygen but deprived of sugar, they will become more stressed than healthy cells, slowing them down or even killing them. ASU’s Center for the Convergence of Physical Science and Cancer Biology, of which Davies is principal investigator, is planning a workshop in November to examine the clinical evidence for this.

“It is clear that some radically new thinking is needed,” Davies states. “Like aging, cancer seems to be a deeply embedded part of the life process. Also like aging, cancer generally cannot be cured but its effects can certainly be mitigated, for example, by delaying onset and extending periods of dormancy. But we will learn to do this effectively only when we better understand cancer, including its place in the great sweep of evolutionary history.”