Firefighters, police officers and military personnel are often required to enter rooms with little information about what dangers might lie behind the door. A group of engineering students at Arizona State University is working on a project that would help alleviate that uncertainty.

“We’re creating a room-mapping system that can be used to map rooms in three-dimensional space,” says Travis Marshall, a student in the College of Technology and Innovation. With guidance from two faculty mentors, Marshall and four other ASU students are working with Sandia National Laboratories to come up with a way to scan a room and produce a 3-D rendering of what’s inside. 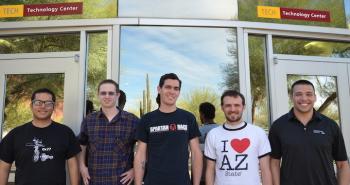 The product they’re building consists of a laser sensor attached to a motor that sweeps all the way around a room, taking 700-800 individual scans, each one with about 680 unique data points. This information is transmitted to a computer program that creates a picture of the room and all its contents. Whoever is controlling the sensor remotely can see and analyze the data in real-time, as it’s being collected.

“The ultimate goal is for this to be very much separated from the user,” Marshall says. “It could be useful for surveillance, or pretty much anywhere a person couldn’t go, or wouldn’t want to go.”

The technology offers incredible potential. A firefighter might be able to avoid entering a room engulfed in flames by mapping it beforehand to determine if there is a need to go inside. A soldier could scan a building and identify potential threats so that he or she is not blindsided.

“Also, if there has been some sort of emergency in a building where rescue workers can’t go inside for fear of it collapsing, this would be a system that could go in and survey damage, possibly survey invisible physical damage to the building’s infrastructure, without people having to go in and risk their lives to do it,” Marshall says.

The students are building the system for Sandia National Laboratories, a U.S. Department of Energy research facility that focuses on security issues. While Sandia has challenged the team to create the most accurate sensor possible, they are also interested in learning about its limitations. For example, the current prototype can’t scan reflective surfaces or see around objects in the room. But these challenges provide helpful insight and are part of the learning process for both parties.

“After we get a blank room mapped, they want us to progressively be able to map more and more complex rooms,” Marshall says. He and his teammates – Matt Bodington, Preston Yeschick, Jeffrey Rojo and Steven Sanchez – are all engineering students who began working together through ASU’s iProjects program. The program matches student groups with industry partners that need help solving real-world challenges.

Each team also benefits from the help of faculty mentors. Angela Sodemann and Tom Sugar are both engineering professors at CTI with experience working on technology similar to what Marshall’s team is developing. They volunteered to be mentors, and have worked closely with the team since the project began.

Sodemann says the students were faced with a unique challenge in that no one was quite sure what the final product would look like.

“This project is pretty open-ended. They don’t have a definite task that they’re trying to accomplish in the end. They kind of have a series of increasingly difficult challenges that they’re trying to meet,” Sodemann says. But that’s what makes the process so valuable. The experience of tackling a problem that’s not clearly defined will prepare the team for their future careers.

“Having to decide for themselves what steps they need to take along the way is good practice for the way that problems really are out there in the real world,” Sodemann says.

For Marshall, who is also using the project to fulfill his senior capstone requirement, the opportunity to work closely, one-on-one with Sugar and Sodemann has been a highlight of the project. He also appreciates the exercise in problem-solving with students from different engineering backgrounds to accomplish a common goal.

“This team has been awesome for getting that experience of working with people that are like-minded, that are interested in the project, that want to do well on it,” Marshall says.

The project will wrap up at the end of the semester, when Marshall and his teammates will present Sandia with the culmination of their work, as well as participate in the Innovation Showcase on the Polytechnic Campus.

Two Arizona State University seniors have created a startup to help students put together study groups near where they live.

Yash Lalwani and his friend Devesh Tuteja have been working on Devils Connect since last year.

“When we talked to freshmen, many of them found college overwhelming,” said Lalwani, a construction engineering major in the Del E. Webb School of Construction in the School of Sustainable Engineering and the Built Environment, one of the Ira A. Fulton Schools of Engineering. “ASU is such a large community, and there is a lack of connectivity.” 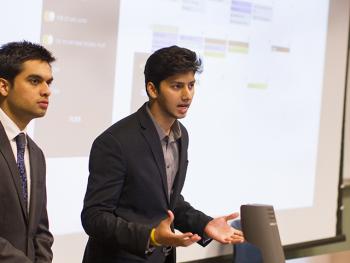 The pair said that through Devils Connect, students can meet and work with others in their classes. They point to studies that show greater retention rates for students who find these kinds of connections.

Students sign up with their ASU email, and enter their courses and address. All address information is kept confidential for safety reasons. Students are then connected to a study group, or clique, of four other students who share several of their classes and live in close proximity.

Devils Connect also has forums for students to discuss assignments, and a calendar where students can enter important dates, like tests or project deadlines. This calendar is collaborative and shared among classmates. Devils Connect allows students to create a calendar for their organizations and manage meeting times using the various features. The team now is working on an app for mobile phones and tablets.

Devils Connect does not carry advertising, nor send unsolicited emails to students who join. Subscriptions, which are free, have grown from 140 students in the test group last year to more than 2,400 today.

Lalwani and Tuteja, a business finance major in the W. P. Carey School of Business, got advice from another engineering student, Jared Schoepf, a finalist for Entrepreneur Magazine’s College Entrepreneur of the Year last year for his team project, SafeSIPP, a portable water purification system.

They have also received advice from ASU faculty mentors, including Matthew J. McCarthy, a lecturer in information systems at the W. P. Carey School of Business; Gordon McConnell, association vice president of research and leader of the Entrepreneurship and Innovation Group; and Ivette Chavez, director of University Academic Success Programs.

Lalwani said they are focusing on signing up freshmen, with the belief that the students will continue to use the service throughout their academic career.

They are applying for up to $20,000 in funding from the Edson Student Entrepreneur Initiative, which seeks to encourage entrepreneurially oriented students to develop and grow new ventures based on their own concepts.

The pair recently received $2,500 through the ASU Innovation Challenge, which provides up to $10,000 to undergraduate and graduate students dedicated to making a difference through social innovation.

They hope that with funding, they can grow the service in five years to serve universities and community colleges across the country.

You can find Devils Connect at http://devilsconnect.com/ and on Facebook.