On March 28 ASU’s Prison Education Awareness Club (PEAC), Department of English and School of Social Transformation want you to turn yourself in.

Or, more accurately, they want you to turn out – for the 3rd annual Prison Education Conference. The conference is slated for 10 a.m to 5 p.m., in the University Club Heritage Room, on ASU’s Tempe campus. 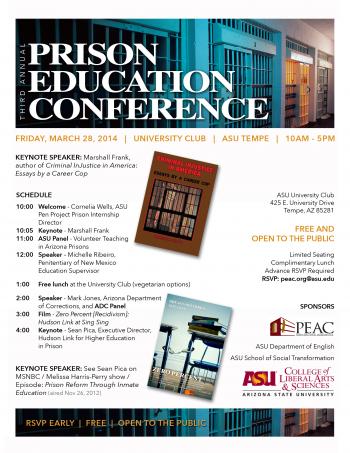 This year’s conference features keynote speaker Marshall Frank, a retired police captain from Miami, Fla., who led more than a thousand homicide investigations during his career and has since written hundreds of op-eds and articles about the state of America’s justice system.

In his most recent book, “Criminal InJustice in America,” Frank explores inequities of the prison system, “a multi-billion-dollar industry, which would collapse if there was a sudden downturn in inmate residency.” Perhaps that’s why the United States has 5 percent of the world’s population, but a staggering 25 percent of its prisoners.

Critics have hailed “Criminal InJustice” as “challenging,” “thought-provoking” and “daring.”

The conference also will feature a free screening of “Zero Percent,” an award-winning documentary about the Hudson Link education program at Sing Sing Maximum Security Prison. This program provides a college education to inmates at the prison, and is remarkable for the fact that not a single graduate of the program has returned to prison. That’s compared to a nationwide recidivism rate of about 60 percent.

After the film, there will be a Q&A session with a second keynote speaker, Sean Pica, the director of Hudson Link for Higher Education in Prison.

Other speakers at the conference will include Michelle Ribeiro from the State Penitentiary of New Mexico and Mark Jones from the Arizona Department of Corrections. Lunch will be provided. The conference and film screening are free and open to the public. RSVP required for the conference only.

The Department of English and the School of Social Transformation are academic units of the College of Liberal Arts and Sciences at ASU.

The Communication Assessment Learning Lab is looking for "Sparky's Next Great Public Speakers" and is hosting a competition to focus on the importance of public speaking, April 25 and 26.

The Communication Assessment and Learning Lab (CALL) on Arizona State University’s West campus is looking for “Sparky’s Next Great Public Speakers” and is hosting a competition to focus on the importance of public speaking, April 25 and 26.

Unlike traditional “speech and debate” tournaments, this event will focus on helping high school juniors and seniors become familiar and comfortable with the speaking standards as outlined in Arizona’s College and Career Ready Standards. Using the framework of competition reality shows (like Food Network’s “Chopped” and “American Idol”), three-person teams from area high schools will compete at ASU’s West campus on April 25, with finalists competing the next day. 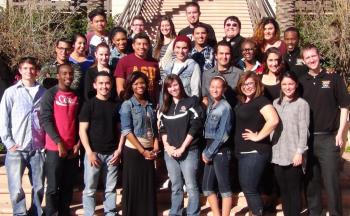 Each member of the winning team will be awarded $150, and their high school will be the recipient of the “Golden Sparky Cup” until next year’s competition.

“One of our goals of this competition is to introduce the idea that public speaking isn’t just for a few people, but everyone has the potential to be a successful communicator in their own unique way,” said Bonnie Wentzel, CALL’s faculty director. CALL is an initiative of ASU’s New College of Interdisciplinary Arts and Sciences, the core college on the university’s West campus. The lab provides a space to practice and improve public speaking skills.

The competition will focus on three areas: research, visual aids and delivery. Each team member will rotate duties in each of the three rounds so that all will have the opportunity to contribute to the team as the speaker. Students will be given a topic, a type of visual aid, a research source and a “Surprise from Sparky” to incorporate into their presentations in this fast-paced, fun competition.

The schedule starts on April 25 with competing high school students having the opportunity to work in the CALL lab with undergraduate and graduate student mentors. Following lunch, sponsored by Barrett, the Honors College, teams will begin preliminary rounds to determine the finalists. On April 26, the final four teams will compete to become Sparky’s Next Great Public Speakers. Final determination of the winning team will be left to a combination of judges' scores and votes from the audience.

There is no cost to participate. Students can learn more about the competition and sign up at https://newcollege.asu.edu/sparkys-call.