Sherry Towers was at Purdue University for a meeting on Jan. 21, 2014, when a gunman shot, stabbed and killed a student. Recalling three other school shootings that had made the news in the prior week, she wondered if the string of tragedies was more than coincidental.

In the days that followed, Towers, a statistician, modeler and an Arizona State University research professor, decided to study the data. 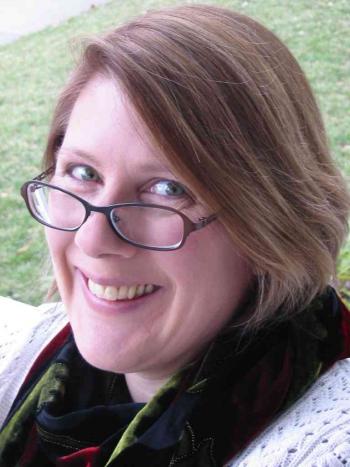 A research team led by Arizona State University physicist Sherry Towers used data on high-profile mass killings and school shootings in the U.S. to determine that such tragedies are contagious. Download Full Image

“I wondered if it was just a statistical fluke, or if somehow through news media those events were sometimes planting unconscious ideation in vulnerable people for a short time after each event,” she said.

The team examined databases on past high-profile mass killings and school shootings in the U.S. and fit a contagion model to the data to determine whether these tragedies inspired similar events in the near future.

They determined that mass killings – events with four or more deaths – and school shootings create a period of contagion that lasts an average of 13 days. Roughly 20 to 30 percent of such tragedies appear to arise from contagion.

As Towers explained, the hallmark of contagion is observing patterns of many events that are bunched in time, rather than occurring randomly in time.

The researchers knew that previous studies have shown that suicide in youths can be contagious, where one suicide in a school appears to spark the idea in other vulnerable youths to do the same.

"It occurred to us that mass killings and school shootings that attract attention in the national news media can potentially do the same thing, but at a larger scale," Towers said. "While we can never determine which particular shootings were inspired by unconscious ideation, this analysis helps us understand aspects of the complex dynamics that can underlie these events.”

The resulting paper, “Contagion in Mass Killings and School Shootings,” appears in the July 2 edition of PLoS ONE.

On average, mass killings involving firearms occur approximately every two weeks in the U.S., and school shootings occur on average monthly. The team found that the incidence of these tragedies is significantly higher in states with a high prevalence of firearm ownership.

Castillo-Chavez, a mathematical epidemiologist in the College of Liberal Arts and Sciences' School of Human Evolution and Social Change, noted the relevance of the team’s research and the growing need to expand upon it.

He offered, “The tragic events in South Carolina demand that we make every effort to learn the influence that media may have on population-level behavior. We hope that this research inspires the efforts of others, particularly scientists, in helping us understand the impact of culture on random killings and how to prevent these heinous acts.”

The ASU Alumni Association Veterans Chapter is raising funds to install a commemorative plaque in the Memorial Union to honor the sacrifice of ASU alumni who died serving in the military. A PitchFunder campaign is in progress.

Update: The ASU Alumni Association Veterans Chapter is raising funds to install a commemorative plaque outside of the Pat Tillman Veterans Center in the Memorial Union to honor the sacrifice of ASU alumni who died serving in the military. The Memorial Wall, as it is to be called, will feature a list of the names of 131 men and one woman who gave their lives for their country. Those who wish to donate to help may do so through the ASU Foundation’s custom fundraising resource PitchFunder. 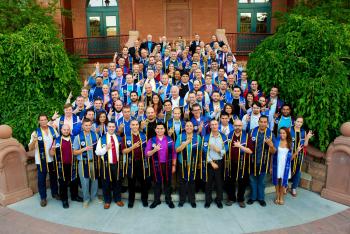 ASU's 2014 veteran graduates gather on the steps of Old Main following a reception where the ASU Alumni Veterans Chapter presented them with colorful stoles for each branch of the military. Photo by: ASU Alumni Association Download Full Image

Their many stories of sacrifice date from World War I in France to as recent as 2013 in Afghanistan. All of them were Arizona State University alumni and all of them gave their lives while in service to the United States. All of them also died while on active duty with a branch of America’s military – except for one.

“Joe Mittendorf was a civilian contractor working with the military on Wake Island when the Japanese captured it early during World War II,” said Jim Geiser, secretary and historian of the ASU Alumni Veterans Chapter and a retired U.S. Marine Major who has researched family genealogy as a hobby for 20 years. “The Japanese shipped the captured Marines off to Japan but kept the civilian contractors on the island to work for them.

“After nearly a year, when the Japanese commander realized Wake Island was about to fall back to the U.S., he executed all 98 of the civilian contractors – and Joe was one of them. So we decided his was a special case that should be included on our list of ASU alumni who have died in service to our country.”

Since formation of the Veterans Chapter three years ago, Geiser has been researching ASU alumni who qualify for its “In Memoriam” list of those who gave the ultimate sacrifice for our country. He explained the two criteria: The deceased veterans had to be registered at ASU as a student, according to the university’s records department, and they had to have died while on active duty serving in the U.S. military.

To date, the Veterans Chapter has included 124 ASU alumni veterans on the list. As Memorial Day approaches, the group is reaching out to the broader community for verification that its “In Memoriam” list of names is both accurate and inclusive. The names are recorded in a memory book at ASU’s Symphonic Carillon. Any additions or corrections should be submitted to carillon@asu.edu. Geiser said his research about each of the ASU alumni veterans who died is available through ASU Library Archives.

One ASU veteran on the list was a victim of one of the worst disasters to befall American military women during World War II. Private First Class Tony Pearl Roomsburg was among nearly 20 Women’s Army Corps (WAC) members on an Army Air Force transport plane that crashed in Africa, killing everyone on board. A native Arizonan, Roomsburg graduated from Arizona State Teachers’ College in 1942 to become an elementary school teacher. She had enlisted as a WAC when tragedy struck in 1945, making her one of the first female overseas casualties of the war.

According to Geiser, another unusual story belonged to 2nd Lt. Hugh Patrick Kelly who had attended ASU and ended up crashing his airplane two miles west of the Tempe campus in 1954. Kelly was flying a training mission when apparently one of the wings fell off his airplane causing it to plunge to the ground near Baseline Road and 53rd Street. Kelly was killed.

“To me, all of these ASU alumni are heroes,” Geiser said. “But because we can’t shake their hand and we can’t look them in the eye, we tend to just let them go. Our In Memoriam list is an attempt by ASU to bring these alumni veterans back to life and let people appreciate what they did and where they came from – to fill in the gaps.”

Professor Mark von Hagen, director for ASU's new Office of Veteran and Military Academic Engagement, said sharing the stories of all ASU student veterans is important. Von Hagen serves on the faculties of global studies in the School of Politics and Global Studies and history in the School of Historical, Philosophical and Religious Studies in the College of Liberal Arts and Sciences. As a historian, von Hagen works with students to capture oral histories of living veterans from America’s most recent conflicts.

“I think the more our ASU students know about their colleagues, their contemporaries and what they lived through in those wars, the better it is for all of us,” von Hagen said. “Students should know what America has put our veterans through and how difficult it can be for them to make the transition back to school.

“We owe it to the people who have lived it to listen to them. It’s better than learning their stories through books or movies. These are real-life veteran students who other students can get to know.”

“For current student vets, the list of names provides a link to the fact that the relationship between ASU and veterans is not new,” Borden explained. “There’s a revived interest in student veterans based on the recent wars in Iraq and Afghanistan, but it’s a legacy that began generations ago. Our In Memoriam project highlights that tie.”

ASU first honored its veterans when it dedicated its iconic Memorial Union on the Tempe campus in 1956. An inside plaque near the north entrance states that the building serves as a living memorial for those who have courageously served our country in the military services. The In Memoriam list is the “perfect adjunct” to the MU, said David Lucier, past president of ASU Alumni Veterans Chapter and veteran of the U.S. Army 5th Special Forces Group.

“Having a list really personalizes it,” Lucier said. “It acknowledges that ASU has a stake in its student veterans. The university helps to nurture their sense of service, and in the end, it is part of their sacrifice.”