The research behind this discovery by Arizona State University evolutionary anthropologist Jason Kamilar and evolutionary psychologist Quentin Atkinson of the University of Auckland appears this week in the Proceedings of the National Academy of Sciences. 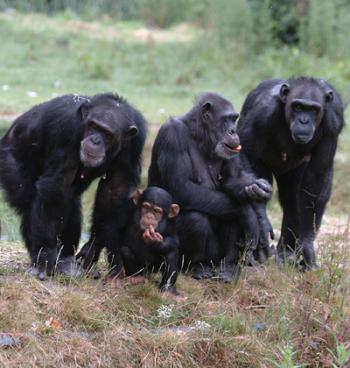 The findings address a subject that generates much discussion, yet is difficult to investigate.

“The evolution of human culture is well-documented in the paleontological record, but similar data are absent for other primates,” says Kamilar, adjunct faculty in the School of Human Evolution and Social Change in the College of Liberal Arts and Sciences.

Kamilar and Atkinson examined the possibility that sequential cultural evolution is shared between humans and great apes in the form of “cultural nestedness,” or the tendency of populations with small cultural repertoires to comprise a proper subset of traits of more complex repertoires.

Using statistical tools from community ecology, they quantified the degree of nestedness in four datasets representing the presence or absence of numerous cultural traits from indigenous human populations in California and New Guinea. Next, they compared the human patterns to those found in chimpanzees and orangutans.

They discovered that cultural repertoires exhibited a significant degree of nestedness in humans and chimpanzees, but not in orangutans.

Their findings suggest that the necessary traits for sequential cultural evolution arose in the last common ancestor of humans and chimpanzees.

“Alternatively, this feature of culture may have originated earlier in time but was lost in modern orangutans because of extensive population level extinctions throughout southeast Asia during the last several thousand years,” Kamilar explains. “These extinctions may have been associated with a substantial loss of cultural diversity, resulting in modern orangutan cultural variation presenting in a random pattern across study sites.”

Chameleons' body regions are "billboards" for different types of information.

To protect themselves, some animals rapidly change color when their environments change, but chameleons change colors in unusual ways when they interact with other chameleons. Arizona State University researchers have discovered that these color changes don’t happen “out-of-the-blue” – instead, they convey different types of information during important social interactions.

For example, when male chameleons challenge each other for territory or a female, their coloring becomes brighter and much more intense. Males that display brighter stripes when they are aggressive are more likely to approach their opponent, and those that achieve brighter head colors are more likely to win fights. Also, how quickly their heads change color is an important predictor of which chameleon will win a skirmish. 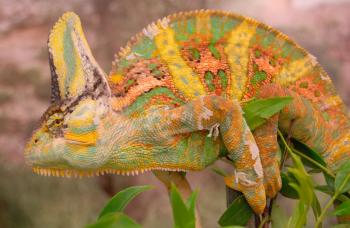 The results of the study are published online in the journal Biology Letters.

Russell Ligon, a doctoral candidate in ASU’s School of Life Sciences, and Kevin McGraw, an associate professor in the school, used photographic and mathematical modeling tools in new ways to study how the color change of veiled chameleons (Chameleon calyptratus) relates to aggressive behavior. They studied the distance, maximum brightness and speed of color change of 28 different patches across the chameleons' bodies.

“We found that the stripes, which are most apparent when chameleons display their bodies laterally to their opponents, predict the likelihood that a chameleon will follow up with an actual approach,” said Ligon. “In addition, head coloration – specifically brightness and speed of color change – predicted which lizard was going to win.”

Chameleons typically have resting colors that range from brown to green, with hints of yellow, but each chameleon has unique markings. During a contest, the lizards show bright yellows, oranges, greens and turquoises. Interestingly, when the chameleons showed off their stripes from a distance and followed that display with a “head-on” approach before combat, the important color signals on the striped parts of the body and head were accentuated.

“By using bright color signals and drastically changing their physical appearance, the chameleons’ bodies become almost like a billboard – the winner of a fight is often decided before they actually make physical contact,” Ligon said. “The winner is the one that causes its opponent to retreat. While sometimes they do engage in physical combat, these contests are very short – five to 15 seconds. More often than not, their color displays end the contest before they even get started.”

This is the first study of its kind. The research team took pictures of color standards and estimated the sensitivity of different photoreceptors in their cameras. Then, they used information on the physiology and sensitivity of the photoreceptors of chameleons and were able to measure the colors actually seen by the lizards. Though this method has previously been used to quantify static (unchanging) coloration, this study is the first to quantify rapid color change while incorporating the visual sensitivities of the animals under study.

There are approximately 160 species of chameleons in the world. Veiled chameleons are native to the Arabian Peninsula – specifically Yemen and Saudi Arabia. They are omnivorous and live essentially solitary lives, except when mating. Many chameleons are at great risk, as destruction of their habitats is occurring at alarming rates.

The study was funded by an ASU GPSA grant and by individual sponsors.

The School of Life Sciences is an academic unit of ASU’s College of Liberal Arts and Sciences.