Urbanization will increase average temperatures in Arizona’s Sun Corridor and white roofs can combat that, but not without consequences for the region’s hydroclimate

A team of researchers from Arizona State University has found that warming resulting from megapolitan expansion is seasonally dependent, with greatest warming occurring during summer and least during winter. Among the most practical ways to combat urbanization-induced warming – the painting of buildings' roofs white – was found to disrupt regional hydroclimate, highlighting the need for evaluation of tradeoffs associated with combating urban heat islands (UHI).

“We found that raising the reflectivity of buildings by painting their roofs white is an effective way of reducing higher average temperatures caused by urban expansion,” said Matei Georgescu, an assistant professor in ASU’s School of Geographical Sciences and Urban Planning. “However, increased reflectivity also modifies hydroclimatic processes and, in the case of the ‘Sun Corridor,’ can lead to a significant reduction of rainfall. Our maximum Sun Corridor expansion scenario leads to a 12 percent reduction in rainfall, averaged across the entire state. Painting roofs white leads to an additional 4 percent reduction in rainfall.”

The research is presented in the paper, “Seasonal hydroclimatic impacts of Sun Corridor expansion,” published in the Sept. 7 issue of Environmental Research Letters. Georgescu, the lead author of the paper, is joined by Alex Mahalov, The Wilhoit Foundation Dean’s Distinguished Professor in the School of Mathematical and Statistical Sciences at ASU, and Mohamed Moustaoui, an associate professor in ASU’s School of Mathematical and Statistical Sciences.

The paper focuses on Arizona’s Sun Corridor, the most rapidly growing megapolitan area in the United States. Located in a semi-arid environment, the Sun Corridor is composed of four metropolitan areas: Phoenix, Tucson, Prescott and Nogales. With a population projection expected to exceed 9 million people by 2040, the rapidly expanding megapolitan offers the opportunity to identify tradeoffs focused on sustainable expansion of the built environment.

“For a maximum expansion scenario, we find greatest warming to occur during summer, in excess of 1 degree C (1.8 degrees F) when averaged over the entire state of Arizona. Warming remains considerable during both spring and fall seasons, approaching 0.9 C. For a minimum expansion scenario, the consistent theme of maximum warming during summer with reduced, although still significant, warming during spring and fall seasons persists,” Georgescu added.

Whereas previous research has documented the contribution of cool roofs as an effective UHI mitigation approach, this work emphasizes the need to broadly evaluate impacts by exploring consequences that extend to hydrology and rainfall.

“Truly sustainable development will have to consider impacts extending beyond average temperature,” Georgescu explained. “A crucial step in that approach is to identify potential adaptation and mitigation strategies and assess tradeoffs, to ensure that we make smart decisions with minimum damaging consequences.”

All three co-authors are affiliated with ASU’s College of Liberal Arts and Sciences and the Global Institute of Sustainability.

As our global society continues to evolve and march forward in the digital age, leaders at a forum in the nation's capital suggested that interpersonal relationships, communication and civility are possibly diminishing.

As our global society continues to evolve and march forward in the digital age, education, business and nonprofit leaders who gathered at a forum in the nation’s capital suggested that interpersonal relationships, communication and civility are possibly diminishing.

“Technology poses an interesting challenge. It offers many new opportunities, but our so-called communications devices actually teach us not to interact directly with one another,” said Sally Kitch, Regents’ Professor and director of the Institute for Humanities Research at Arizona State University. “We’ve become very selective in how we choose to communicate. We can now express ourselves in cyberspace with no repercussions. If repressing diverse voices once supported civility, this voluntary exclusion of diverse voices is now undermining it.” 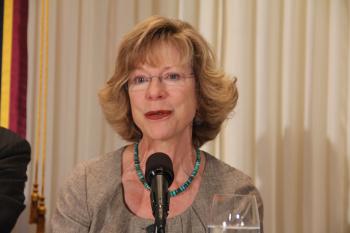 Kitch’s remarks were made at a Sept. 7 forum called “Are We Losing Our Humanity?” hosted by Arizona State University at the National Press Club in Washington D.C. Kitch was one of nine panelists who explored the implications of explosive population growth, divisive political rhetoric, new media, and religious and cultural intolerance for maintaining humanistic values.

“This theme of ‘Are we losing our humanity?’ resonates with so many because everyone on some level is trying to make sense of the seemingly senseless acts that take place in our homes, in our communities, and in our world,” said Neal A. Lester, director of ASU’s Project Humanities and forum co-coordinator. “Media attention and news headlines of vicious personal attacks in the name of political campaigning, the public massacres, the blatant abuses of power, and the myriad other happenings around us require self-reflection, critical awareness and honest dialogue.

"Our hope is that the forum has given our participants some new information and perspectives to help navigate our own thinking. As well, we hope that there is a renewed sense of how humanities as the study of humanity matter every day.”

A re-infusion of humanistic values and perspectives in the way we train scientists, businesspeople, doctors and engineers to help them develop more efficient systems was one of many recommendations from the panel.