"Diabetes of Democracy in South Phoenix" is a research project designed to examine the efficacy of the arts – specifically, theatrical performance – in changing the dietary attitudes and behaviors of young people at higher risk for chronic diseases such as diabetes.

It was conceived by professors Tamara Underiner and Stephani Woodson of the School of Theatre and Film, Herberger Institute for Design and the Arts, and Seline Szkupinski Quiroga and Donna Winham of the School of Nutrition and Health Promotion. The project considers the growing trend toward obesity among young Latinos in the Southwest, whose dietary choices are influenced both by their ancestral culture and by pressures to assimilate to a more mainstream U.S.-American diet, in light of recent studies in cultural and social anthropology relating food preferences to cultural location. 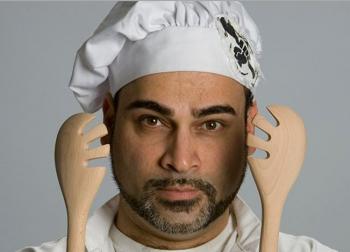 Last semester the project used culturally specific cuisine, storytelling and rituals combined with performance art and interactive cooking to spark discussion about the epidemic of Type 2 diabetes and share strategies for combating the disease.

Mero Cocinero, the People’s Cook, and his comrades spent most of January in an artistic residency in Phoenix, where they conducted their signature “Cook. Eat. Together.” performance workshops with high school and college students, as well as allied health practitioners. Cocinero is the alter ego of San Francisco-based chef, performance artist and host of “The Cooking Show con Karimi & Comrades” Robert Karimi. The artists provided public cooking demonstrations in various locations around Phoenix, including a performance at ASU’s Tempe campus Farmers Market last spring.

“Since I came to ASU and started working with the South Phoenix community, I have been asked again and again, ‘what do we do about the rising rates of obesity and diabetes among our children?’” said Seline Szkupinski-Quiroga, faculty associate in the College of Nutrition and Health Promotion. “When I heard that Karimi, who I know from working together at Galeria de La Raza in San Francisco, had redesigned his Cooking Show to focus on diabetes, I knew we had to bring him to Phoenix, to share his unique blend of humor, culture and empowerment, and see if it made a difference.”

The artists’ residency was part of a pilot study examining the relationship between creativity, theatrical performance, and changes in dietary attitudes and beliefs.

“Food doesn’t just fuel the human body – it also carries many deep meanings at the level of the individual body, the social body, and the body politic,” said Tamara Underiner, associate professor in the School of Theatre and Film. “We learn what food means when we attend to the places it is eaten, the conversations that occur around it, the ways it is shared, and the stories told by the people who prepare it.”

"Diabetes of Democracy" has been featured on a variety of media outlets, including NPR, and Eight, Arizona PBS. The project was featured on a new program, "ASU Discovers: New Perspectives on Research," that will "go inside the laboratory and out into the community with Arizona State University's top researchers, as they find novel solutions to a variety of challenges."

Herberger Institute for Design and the Arts Research

"The Last Lost World: Ice Ages, Human Origins and the Invention of the Pleistocene," is an intergenerational, non-fiction book that explores the Pleistocene era with humanist spin.

As a doctoral student in History and Philosophy of Science at Arizona State University, Lydia Pyne ended up sharing an office with her father Steve Pyne, a professor of environmental history in the university’s School of Life Sciences. Steve’s extra storage space – for housing his many books and projects – also offered his daughter a small, private workspace away from the crowded graduate student office.

It also offered the pair the opportunity to turn their frequent, playful intellectual banter into a co-authored book and, for Lydia, a dream come true. 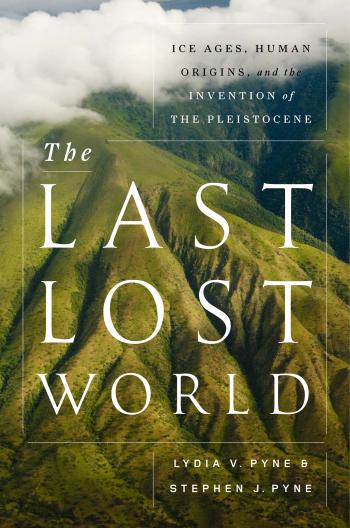 Their exchanges inspired “The Last Lost World: Ice Ages, Human Origins and the Invention of the Pleistocene.” This nonfiction book is an intergenerational work representing the authors’ intellectual adventure into the rich scientific and historical underpinnings of an important geological time period.

The Pleistocene, an era that lasted from more than 2.6 million years ago to approximately 10,000 years ago, is defined by the last great ice age and the appearance of modern humanity’s ancestors.

Yet, as presented in the book’s title, just what is the “invention” of the Pleistocene?

“Even the ideas we developed to explain the epoch have a history – they are themselves cultural inventions,” explained Steve. “This work argues that we need to supplement science of human origins and evolution with other scholarship.”

While her father studied English and American civilization, Lydia studied anthropology before completing a doctorate in History and Philosophy of Science at ASU’s School of Life Sciences in the College of Liberal Arts and Sciences. She says there are two Pleistocenes.

“One is the hard, tangible Pleistocene, and concerns geology, ice and fossils,” she says. “But there is also the cultural Pleistocene, which is concerned with ideas.”

Lydia recalls the most memorable experience in working with her father was the ongoing, inspirational dialogue between them.

“The ideas came continuously. There was an incredible amount of brainstorming and overall, we were just so excited about the project,” Lydia said.

“I was willing to be a little more romantic with the subject,” recalled Steve. “So she was the one who was always having to reign me in. We just went back and forth constantly. She was the one to say, ‘No Dad, that’s too much. Take it out.’”

The book became a synthesis of Steve’s expertise in environmental history and Lydia’s interest in narrative and the intellectual history of paleoanthropology. The pair set out to answer the questions: What is the history of the ideas that surround the Pleistocene, and how does how we think about the Pleistocene change over time? What can the humanities offer the sciences in this regard?

“We take the disciplines of geology, geomorphology, archaeology and paleoanthropology, and we refract them through the lenses of the humanities,” said Lydia. “Our approach focuses on broadly humanist themes, which we intend to complement, not compete with, prevailing Pleistocene studies.”

In the book, the authors explore human origins from multiple vantage points.

“Agreeing on origins remains complicated, not only because fossils are few, but because we cannot agree on who we are and why we are that way,” added Lydia.

In a recent critique by Booklist, reviewer Roy Olson writes, “For science mavens of a philosophical bent this may be the book of the year, a font of knowledge and, what’s more and better, intellectual exercise.”

If you have a chance to take a trip to “The Last Lost World,” you may very well experience, as Lydia describes, “a place in the geography of imagination and another of geologic time whose difference helps define our own time and selves.”

Lydia Pyne is a Visiting Fellow at the Pennoni Honors College at Drexel University. Before receiving her doctorate from ASU, she earned a master’s in anthropology from UT Austin. She has performed fieldwork worldwide in both archaeology and paleoanthropology.

Steve Pyne is an environmental historian, a MacArthur Fellow and a Regents’ Professor in ASU’s Center for Biology and Society and the author of more than twenty books including “Year of the Fires,” “The Ice,” “How the Canyon Became Grand,” and most recently, “Voyager: Seeking Newer Worlds in the Third Great Age of Discovery.”  He has also developed a nonfiction writing course for graduate students.