One of the next big leaps in biomedical science and engineering is likely to come when more secrets are revealed about the workings of stem cells.

New discoveries could enable repair of severe damage to the body through the abilities of stem cells to multiply and develop, says Karmella Haynes, an assistant professor in the School of Biological and Health Systems Engineering, one of the Ira A. Fulton Schools of Engineering at Arizona State University. 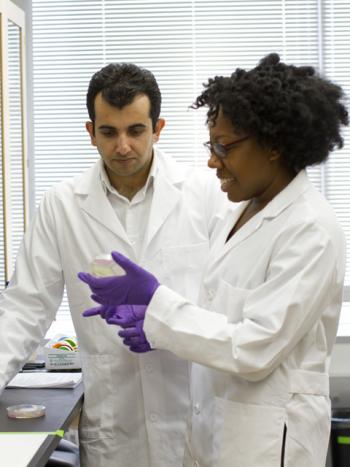 Haynes, whose work focuses on synthetic biology, will talk about what advances in stem cell research promise for the future at 7 p.m., Nov. 2, at the Arizona Science Center.

“Most of us have observed how our bodies heal themselves from minor wounds, such as scrapes and cuts, by growing new skin. Some animals such as starfish, geckos and aquarium zebra fish can grow whole limbs and even vital organs by keeping a supply of stem cells on reserve throughout their lives,” Haynes explains.

“We may someday be able to use stem cells to repair, or even re-grow, lost organs or limbs for humans,” she says.

Her interest in genetics was sparked during a summer research internship at the Massachusetts Institute of Technology during her undergraduate years. That interest would later lead to a post-doctoral position in synthetic biology at Davidson College in North Carolina.

Among a range of research pursuits, Haynes’s work at ASU includes development of a synthetic protein that is able to control gene expression and slow the growth of cancer cells.

The Arizona Science Center is at 600 E. Washington Street in downtown Phoenix. Haynes will speak as part of activities during the center’s monthly Adults Night Out.

Admission to Haynes’ talk is free, and audience members will have the opportunity to ask questions.

Religion still at the heart of politics in America

"Despite the clear separation of church and state – religion lies at the heart of American politics," says James A. Morone, who will give a free lecture at ASU, Oct. 29.

Religion still at the heart of politics in America

Everyone knows the history of the United States: The Puritans came from England to escape religious persecution, God blessed America, and our free nation stands as a “city on a hill” for the world to emulate.

According to James A. Morone, the Puritans, with their godliness and morality, set the tone for the new country. 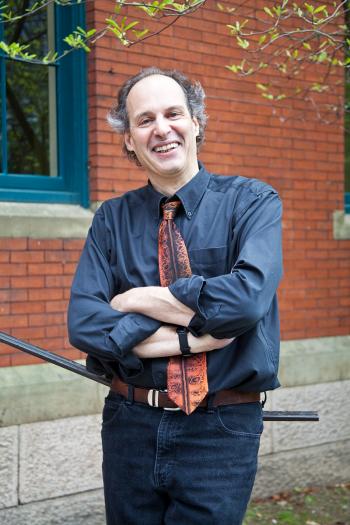 The Puritans’ moral dreams “define American ideals,” Morone writes in his 2003 book “Hellfire Nation: The Politics of Sin in American History,” which was nominated for a Pulitzer Prize, and “inspire crusades at home and abroad – from the revolution of 1776 to the war on terror more than two centuries later.”

And “despite the clear separation of church and state – religion lies at the heart of American politics,” according to Morone, professor and chair of political science at Brown University, who will give a free lecture at Arizona State University on Oct. 29.

The lecture, sponsored by the Center for the Study of Religion and Conflict, will take place from 4:30 to 6 p.m. in Old Main’s Carson Ballroom, Tempe campus.

Morone says that morals play such a crucial role in America because, primarily, “Americans believe in God. In other nations, a handful of stable faiths claim a fixed social place; in the United States, religions restlessly shift, split, and spread in a kind of ecclesiastical uproar.

“The nation develops not from religious to secular but from revival to revival. The moral fervor mixes with the American social chaos: new people keep arriving, and each new immigration stirs fears of moral decline.”

One illustration of this moral fervor happened in the 1820s, Morone said, when the postal service introduced Sunday mail delivery. “The innovation shook the ministers’ grip on the village Sabbath, especially in New England,” he wrote, “Suddenly the mail coach was barging into town, bringing news, noise, and a ride to the next village.

“Community leaders organized a great campaign to stop the Sunday deliveries. They raised funds, held rallies, published tracts, signed petitions, and failed to dent the infidels (or Democats) in Washington.

“The congressional community rudely snubbed the Sabbatarians. But the political movement, now up and running, shifted its attention to a larger moral cause – abolishing slavery.”

Morone said, “From the very start, Americans have been asking the same question: Who are we? Each new generation of immigrants provoke the question – and a great bout of politics. The debate about who we are always seems to turn back to morals: the virtuous versus the vicious, the saints versus the sinners, us versus them. These dichotomies are always on display but this election season has brought them out in full force.

Morone, who earned his doctoral degree from the University of Chicago, is widely recognized for his informative and inspiring lectures, having been awarded the Hazeltine Citation for “the teacher who most inspired them” by Brown University students in 1993, 1999, 2001, 2007 and 2008.

His most recent book, “The Heart of Power: Health and Politics in the Oval Office from Roosevelt to Bush” (2009), returns him to an issue that has shaped much of his scholarly work, that of why healthcare is such a contentious issue in American politics.

Morone also has written more than 100 essays, including one that reflects on Harry Potter and its lesson for American education.

James Morone is important as a speaker today because, as "a distinguished scholar and  dynamic public intellectual, brings together history, politics, religion, and public policy to illuminate currents in American life, past and present.  He poses the most basic and challenging questions about who we are as a nation," said Linell Cady, director of the Center for the Study of Religion and Conflict.