New research by John Parker of Barrett, the Honors College, at Arizona State University and Edward Hackett of ASU’s School of Human Evolution and Social Change works to identify the specific types of research environments and social interactions that facilitate success in these collaborations.

Parker presented the team’s analysis of factors that facilitate cross-disciplinary collaborations between scientists and policymakers Feb. 18 at the 2013 annual meeting of the American Association for the Advancement of Science (AAAS). His talk was titled “Ecology Transformed: NCEAS and Organizing for Synthesis.”

Parker and Hackett are using novel, state-of-the-art research instruments known as “sociometric sensors” in their investigation. These are wearable computers that record data about how scientists and policymakers interact with each other, including movement, vocal tones, interruptions, volume and other conversational nuances.

They will use these sensors to study scientists working on real problems at several research centers around the world with the aim to identify patterns of social interaction that are best related to collaborative success. Sensor data also will be integrated with interviews, surveys and observations of the scientists.

Hackett and Parker hope that the groundwork they build in these studies will pave the way for future research on the same topic and allow for the creation of new types of research centers capable of meeting the challenges of the future. Their work also has implications for ASU’s vision as The New American University.

“What we are doing,” Parker said, “is related to what ASU is trying to do on a larger scale. By embedding engagement into activities, the university hopes to positively impact the social and environmental development of individuals and the community as a whole.”

Freshman Desirae Krawczyk was able to secure the match clinching fourth point late in the match for the Sun Devils.

The #29 Arizona State University Women's tennis team hung on at the end to defeat Santa Clara University by a score of 4-3 on Sunday afternoon in Tempe, Ariz. Freshman Desirae Krawczyk was able to secure the match clinching fourth point late in the afternoon for the Sun Devils.

"I thought they (Santa Clara) played very well in the singles, they won four first sets and jumped on us pretty handidly," Arizona State head coach Sheila McInerney said. "But like I said, nothing is going to be easy -- big credit goes to our kids for fighting back." 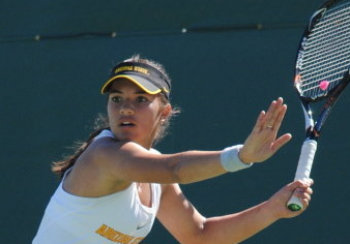 The Sun Devils opened the afternoon winning all three doubles matches, with the closest being a margin of 4 points on the No. 1 doubles court.

After the conclusion of the doubles, ASU freshman Stephanie Vlad was yet again the first one done, earning the second match point in two sets, 6-0, 6-2, putting her team on top 2-0.

From that point on, Santa Clara ran the table for the next two matches – winning on the No. 6 and No. 1 courts. On the No. 1 court, senior Jacqueline Cako fell to Katie Le in two sets. The first saw a 7-6 (3) tilt in favor of the Bronco, followed by a clean 6-2 victory in the second set.

"I just didn't quite play the way I needed to play – I wasn't making enough balls and I wasn't taking the balls early enough so she (Katie Le) was able to push me around too much," Senior Jacqueline Cako said.

Le, who is ranked in the Top-25 in the country handed Cako her first match loss of the 2013 season.

"She (Le) just didn't make many mistakes, she was coming forward whenever she had the opportunity and I was slicing the ball a little bit too much," Cako said.

Hannah James put an end to the Santa Clara run, a three set match after falling in the first set 1-6, then finishing off with identical 6-4, 6-4 scores in sets two and three.

"In the second set I shook off my nerves and decided to play my game a little bit more," Hannah James said. "She (Chelby Coake) was not missing at all – I was putting her under a lot of pressure expecting her to miss but she (Coake) did not miss one ball," James said.

James is fresh off two-foot surgeries in the last eight months, and the ASU coaching staff has been taking their time working her back into the lineup, hoping for big gains – which has paid off as an effective strategy.

"Hannah (James) played well yesterday, that's why we moved her up in the lineup. I think she's getting her confidence back," McInerney said.

"Desirae had a long three-setter yesterday, and was able to come back and win today as well, so that's good for her," McInerney said.

Krawczyk's win secured the fourth and final point for ASU, tipping the overall scale in favor of the Maroon and Gold. The final match of the day ended in a shortened tiebreaker third set that saw Leighann Sahagun's first match loss of the 2013 season.

"We're certainly going to take the win and move on from here," McInerny said.