More ordinary buyers are finally getting into the Phoenix-area housing market as home prices continue to rise and investors find fewer bargains to snap up. That’s according to a new report from the W. P. Carey School of Business at Arizona State University, which reveals the numbers for Maricopa and Pinal counties, as of November: 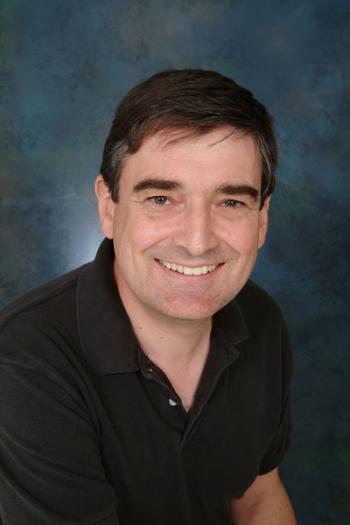 • The tight housing supply grew 31 percent between September and December, but another drop may be coming in the spring.

• All-cash offers are finally on a downward trend, signaling that investor interest may be waning a bit and more ordinary buyers are able to successfully compete for homes.

However, according to the report’s author, Mike Orr, the market is unbalanced, with not enough homes available for the many buyers, especially at the lower end. The number of homes for sale, but not under contract, was down 7 percent year-over-year at the start of December. Specifically, the amount of bargains or “distressed supply” was down a whopping 43 percent from last year. Things started to improve this fall, with total supply up 31 percent from September to December, but Orr doesn’t see more good news coming.

“We don’t see a strong flow of new listings coming onto the market,” says Orr, director of the Center for Real Estate Theory and Practice at the W. P. Carey School of Business. “For example, short-sale listings are down about 70 percent compared to this same time last year. As the market improves, it seems many people may have decided to hang onto their homes in an effort to let values keep going up. I also anticipate another possible drop in supply this spring. Unless new-home builders can start keeping up with rising demand, we may have a chronic supply problem.”

Ordinary buyers, who usually need financing, still face multiple bids and tough competition from investors offering sellers preferred all-cash deals. In fact, almost half (48.4 percent) of the single-family-home sales under $150,000 in November were all-cash purchases. However, the percentage of homes bought by investors declined from 35.5 percent in August to 27.5 percent in November. Orr says investor activity peaked around August and is on a long-term downward trend. With the possible exception of a brief, normal holiday spike in December/January, he expects a continued drop in investor activity.

“As prices go up each month, price-sensitive buyers, such as investors, get a little less enthusiastic,” explains Orr. “Bargain hunters haven’t got much left to pick over, which is allowing more normal buyers to jump into the market before prices rise past what they can afford.”

Foreclosures are down in the market. Completed foreclosures on single-family and condo homes dropped 34 percent from November 2011 to November 2012. Foreclosure starts – homeowners receiving notice their lenders may foreclose in 90 days – went down 48 percent.

Sales activity stayed relatively level, dipping just 1 percent from November to November. The most expensive types of sales, new-home sales and regular resales, are up 32 percent and 84 percent. All types of discount sales, such as short sales and bank-owned-home sales, are down.

Almost every area of the Valley has seen prices explode over the past year, led by Pinal County, including Eloy, Arizona City and Maricopa.

Orr’s full report, including statistics, charts and a breakdown by different areas of the Valley, can be viewed at http://wpcarey.asu.edu/finance/real-estate/upload/Full-Report-201212.pdf. A podcast with more analysis from Orr is also available from knowWPCarey, the business school’s online resource and newsletter, at http://knowwpcarey.com/index.cfm?cid=13.

Learn about American history 'A to Z'

Kyle Longley's new five-part series examines American history not as individual, momentous events, but as the long timelines beneath.

Learn about American history 'A to Z' 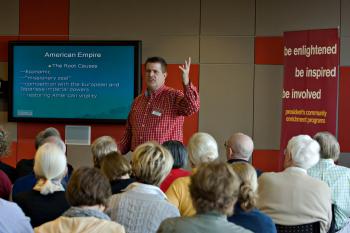 For five weeks this month and next, Longley will share his approach to history with a group of non-traditional students as part of the ASU Foundation’s Presidential Engagement Programs (PEP). His course, “American History A to Z: From the atomic bomb to Emilio Zapata – and a lot in between” is his 11th PEP offering. “I hold the record for the most PEP presentations,” he says enthusiastically. Longley is also one of PEP’s most popular presenters, and anyone interested in participating – community members and ASU students – should secure a place soon at asufoundation.org/pep. The course runs from 10 a.m.-noon, Wednesday mornings, Jan. 30-Feb. 27, at ASU SkySong.

“American History A to Z” is for anyone who wants to better understand the United States and how it developed into a global power. Such understanding comes not from recounting individual, momentous events, Longley says, but from examining them as parts of a continuum. It is an approach he chooses because it “attests to the value of looking at things critically,” he says. “You can look at single events, but underlying them are long timelines.”

He notes an instance from one of his previous PEP courses in which a discussion of the U.S. occupation of the Philippines surprised class participants with the fact that “enhanced interrogation techniques” are not a new source of controversy in America. “Kirkegaard had it right,” Longley says. “Life can only be understood backward, but we have to live it forward.”

For this PEP series Longley will look at the history of the U.S. from 1900 to today, exploring environmental, social, cultural and economic patterns that have evolved the comparatively unique American character. The class will emphasize important events and people, familiar and famous as well as nearly unknown, to provide an understanding of how the U.S. became a global power.

“These PEP courses are something I enjoy doing immensely,” Longley says. “It’s so much fun to be in front of an enthusiastic, well-traveled group that asks great questions. They understand how rewarding it can be learning just for the sake of learning.” He attributes much of that reward and enthusiasm to the classes’ participatory format. “The attraction is not just about the class, but about the interaction; about the relationships,” he says, adding, “And those relationships are not just between me and the class, but with other class members as they meet and discover similar interests and experiences. Some of those friendships have continued outside the classes, even from year to year.”

Kyle Longley is the Snell Family Dean’s Distinguished Professor and associate director of the School of Historical, Philosophical and Religious Studies. He also serves as a professor in the School of Politics and Global Studies at ASU. He is the author of five books, one of which was awarded the A.B. Thomas Book Prize from the South Eastern Council on Latin American Studies. In 2003 the Associated Students of ASU named Longley the Centennial Professor as the outstanding teacher of the year.

The School of Historical, Philosophical and Religious Studies and School of Politics and Global Studies are  academic units in the College of Liberal Arts and Sciences at ASU.