Steve Patterson, chief operating officer of Sun Devil Athletics and managing director of the Sun Devil Sports Group, has been appointed ASU's vice president for university athletics and athletics director, subject to the approval of the Arizona Board of Regents. 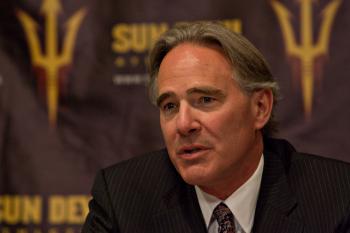 He will consolidate his duties as managing director of the Sun Devil Sports Group into his new responsibilities.

Patterson replaces Lisa Love, who became vice president for university athletics in April 2005. She is leaving ASU to pursue other career opportunities.

“In his time at ASU, Steve Patterson has shown a level of sports management expertise rarely seen at the college and university level,” said ASU President Michael M. Crow. “He is the ideal person to build on the foundation Lisa built and to take Sun Devil sports to the next level – to the highest level.

“I wish to thank Lisa for seven years of excellent service. During her tenure here, ASU won seven national championships and the academic performance and graduation rates of our student athletes improved dramatically.”

“I’m excited that Dr. Crow gave me the opportunity to oversee Sun Devil Athletics,” Patterson said. “We expect to have a program that consistently competes for Pac-12 championships, with athletes that graduate, connect and serve our community, and operate with integrity, discipline and respect. It’s time for our men’s basketball and football programs to compete for championships and perform at the same level as our successful spring sports.”

Crow said the objectives of Sun Devil Athletics under the leadership of Steve Patterson remain the same: graduate student athletes, win championships and play by the rules. Patterson will review all current operations. He will evaluate how best to support Coach Todd Graham’s program to have a nationally ranked football team that wins Pac-12 championships year after year and the readiness of the men’s basketball team to return to NCAA tournament form.

ASU athletics on March 1, 2012 received a full 10-year recertification by the NCAA Division I Committee of Athletics Certification, after a comprehensive overview of how its athletics program is operated. The program features 12 women's and nine men's sports and provides support to approximately 500 student-athletes.

In 2008, Sports Illustrated named Sun Devil Athletics as the top athletic program in the nation, and that year ASU finished fourth in the Director’s Cup ranking – the high-water mark for the program.

ASU has drawn national attention for the success of its student-athlete academic support program. (See the 2010-2011 academic report.)

A 2009 Pac 10 Compliance Review report stated: “In some ways, ASU could be the poster child” for the NCAA Academic Performance Program. This program is dedicated to providing student-athletes with exemplary educational and intercollegiate-athletic experiences in an environment that recognizes and supports the primacy of the academic mission of its member institutions.

According to statistics released by the NCAA, ASU had an all-time high 79-percent Graduation Success Rate (GSR) in 2010-2011. The 79-percent GSR ranks ASU fifth in the Pac-12 Conference, just one percentage point out of fourth-place Oregon and just four percentage points from second-place (UCLA and Washington which tied at 83 percent).

• 65 percent of all student-athletes earned Sun Devil Scholar-Athletes honors (which requires a 3.00 GPA)

• 21 student-athletes completed the year with a 4.00 cumulative GPA

Through legislative authorization from the State of Arizona, ASU has been able to form an athletic facilities district involving some 300 acres of land on its Tempe campus. As the land is developed commercially, the university can use the revenue stream from ground leases and payments in lieu of property taxes to fund the renovation and enhancement of its existing sports facilities and to build new ones.

ASU expects to realize $15 million annually in new TV revenue from the Pac-12 television operations and is leveraging a portion of that income by reinvesting it in sports marketing and operations with the goal of doubling the budget of its athletics department in four to five years.

Steve Patterson has built championship professional teams and designed, financed, built and run stadiums and arenas. As general manager of the Houston Rockets, he built the 1994 NBA Championship team. Later, he successfully led the effort to bring the Houston Texans NFL team and Super Bowl XXXVIII to Houston, Texas. As president of the Portland Trail Blazers, The Rose Garden and Rose City Radio, Patterson refined his skills as a turnaround specialist, while garnering national recognition for his player acquisition skills when he took over as the team’s general manager.

Patterson also served as the president, general manager and governor of the Houston Aeros hockey team. For his efforts he was named the 1995 winner of the Andy Mulligan Trophy as the IHL’s Executive of the Year.

In addition to his roles with the Aeros, Patterson also acquired and served as president and partner in Arena Operating Company, which managed and operated Compaq Center, Houston’s home of the Rockets, Aeros and Comets.

Born and raised in Beaver Dam, Wis., Patterson attended the University of Texas, graduating with honors earning a bachelor’s degree in business administration in 1980. He graduated from UT’s law school in 1984.

Faculty, staff, students and visitors to ASU's Tempe campus: Look around as you stroll the malls and notice the trees.

Faculty, staff, students and visitors to Arizona State University’s Tempe campus: Look around as you stroll the malls and notice the trees. Trees in varying shapes, sizes, colors and textures. 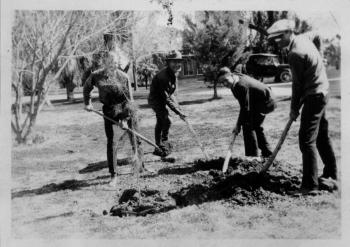 For all of these trees, ASU has received a 2011 Tree Campus USA award for maintaining the five annual standards developed by the Arbor Day Foundation to promote healthy trees and student involvement. (The award only applies to the Tempe campus, since ASU’s Arboretum Grounds Services does not track trees on the other campuses.)

And the Tempe campus will have three more trees as of April 5, when The Arboretum at ASU plants three guavas during a Tree Campus USA Arbor Day observance at 2 p.m., in the Secret Garden. (Located between Dixie Gammage and West halls.)

According to Deborah Thirkhill, program coordinator for the Arboretum, the five annual standards are the establishment of a tree-advisory committee, evidence of a campus tree-care plan, dedicated annual expenditures for its campus tree program, an Arbor Day observance and the sponsorship of student service-learning projects.

“We won 100 trees the inaugural year of Tree Campus USA in 2008 and have received the recognition from the Arbor Day Foundation every year since,” Thirkhill said.

While the newest trees will be guavas, the oldest documented tree on the Tempe campus is the Arizona cypress on Orange Street in front of Physical Education East, which was planted in 1910,” Thirkhill said.

There is no official count of the number of trees on the Tempe campus, but Thirkhill hopes to have a list soon.

“We recently installed a GIS program to count and track all our trees. With the help of Campus Student Sustainability Initiatives students we hope to accomplish this within a year.”

One of the annual standards set forth by the Arbor Day Foundation is having a tree-advisory committee. Two new members have joined ASU’s advisory committee recently – Chris Martin, a professor in the Department of Applied Science and Mathematics, who earned his doctoral degree in environmental horticulture from the University of Florida, and Alix Rogstad, program manager for Urban and Community Forestry Programs with Arizona State Forestry.

“One of my many hats is overseeing and managing the Tree City USA, Tree Campus USA, and Tree Line USA programs within Arizona,” Rogstad said.

“ASU has demonstrated its commitment to campus forestry by hosting and facilitating a multitude of projects over the years, and it has bragging rights because it was one of the first nine recognized Tree Campus USA in the country.

“This, in and of itself, is something of which ASU-alumni and staff should be proud. I have been asked to be on ASU’s Tree Advisory Board because of my role with Arizona State Forestry. Playing a role (however minor) in the program’s future at ASU is exciting and I am looking forward to seeing how the program continues to flourish.

Mary Widhelm, program manager for the Arbor Day Foundation, said, “Your entire campus community should be proud of this sustained commitment to environmental stewardship. Your diligence in improving the environment and quality of life at Arizona State University contributes to a healthier, more sustainable world for us all.”

Tree Campus USA is sponsored by the Arbor Day Foundation and Toyota.