Crime scene investigative techniques and science-based video games are just a few of the interactive attractions to be presented at Open Door @ ASU West on March 2. Free activities, demonstrations and displays designed to enlighten and entertain visitors of all ages will be offered from 11 a.m. to 2 p.m. in the University Center Building and other locations on the West campus, 4701 W. Thunderbird Road in Phoenix. 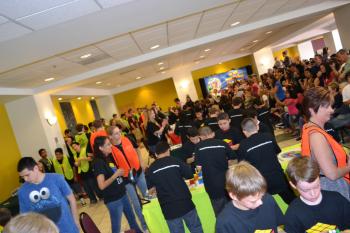 All three New College schools will be represented during Open Door @ ASU West. The School of Mathematical and Natural Sciences, home to ASU’s new bachelor’s degree in forensics, will offer a look at the science behind crime scene investigations.

Phoenix Theatre’s Cookie Company will offer two performances of “Peacemaker,” at noon and 2 p.m. Full of clowning, juggling and physical storytelling, this play for young audiences promotes acceptance, empathy and friendship. Also on the schedule is a presentation of an interactive performance piece for clarinet and percussion, featuring New College faculty members Barry Moon and Patricia Clark. These two cultural experiences are presented by the School of Humanities, Arts and Cultural Studies.

From the School of Social and Behavioral Sciences comes an interactive activity focused on the uses of descriptive words in science. The Communication Assessment Learning Lab (CALL) gives participants the chance to film their responses to what they feel, hear smell, taste or see. The exercise provides insight into the processes scientists use to tell their stories, as they describe the colors of the universe, the texture of soil, and the difference between salty, sweet and bitter.

New College also is offering an ExSciTE workshop as well as a presentation on March 2. Free ExSciTE workshops are designed to introduce students in grades six through nine to a variety of college majors and to help them build their pre-college skills. The workshop, from 9 a.m. to noon, is titled “Is Phoenix really the least sustainable city on the planet?” It is designed for sixth- and seventh-graders; another version designed for eighth- and ninth-graders will be offered April 13. Registration information, along with a list of other upcoming ExSciTE workshops, is available at www.newcollege.com/exscite.

Open Door @ ASU West features poster and multimedia presentations showcasing the state-of-the-art research and creative endeavors of New College students. The students are involved in research in collaboration with professors through the New College Undergraduate Inquiry and Research Experiences (NCUIRE) program. NCUIRE provides a rare opportunity for undergraduate students to work on research projects with faculty who are renowned experts in their fields. New College faculty members also will showcase their research and creative activities on March 2.

Offerings from the Mary Lou Fulton Teachers College include interactive science activities and experiments designed to support Science, Technology, Engineering and Mathematics (STEM) learning for grades K-8. Teachers College’s Center for Games and Impact will demonstrate Taiga, a video-game based, environmental science curriculum. Taiga allows students to travel to a virtual park to understand why the fish are dying. The student traverses through the virtual world gaining insight from the park ranger, takes water samples, learns about turbidity and inevitably works toward an epic win, to save the park.

The W. P. Carey School of Business will showcase “The Beast,” a simulation activity that gives participants a sneak peek a supply chain management. Supply chain is the process of moving goods from the customer order through the raw material stage, supply, production and distribution. “The Beast” fosters listening skills and teamwork. This year, the Carey School will add a Bachelor of Science degree in supply chain management with an emphasis in logistics at the West campus.

The new Sun Devil Fitness Complex will be open for tours, and games and activities will be offered on the new grass Quad to the north of the fitness complex. Open Door @ ASU West attendees also may pay a visit to Fletcher Library to view the “Echoes” mixed media visual arts exhibit that is on display in the library through March 8.

Event co-sponsors Liberty Buick from Peoria and Sands Chevrolet from Glendale will bring new-technology vehicles to display on campus. The Glendale Fire Department also will be on campus with activities.

Also part of the day’s festivities is a Rubik’s Cube tournament that will pit dozens of school-based teams of K-12 students against one another to see who can collectively solve 25 Rubik’s Cubes in the shortest amount of time. The competition runs from 9 a.m. to 4 p.m.

A variety of food and drink options will be available. The Fan Boy food truck will be on campus serving up Asian fusion cuisine. Campus food-service vendors including Starbucks, Jamba Juice and the Provisions on Demand (POD) market will be open for business.

Later on March 2, the celebration continues as ASU’s Tempe campus hosts Night of the Open Door.

Engineering students are prepared to entertain and educate the public at ASU's Engineering Open House.

Engineering students at Arizona State University are stepping into the spotlight to showcase their design creativity and technological prowess. 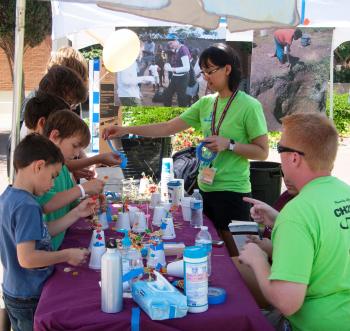 “We’re excited about what we’re doing. We go a lot of nights without sleep, working on our projects,” he says. “We’re dreaming of designing things that will change the world. So, if given a chance, we’re going to go on and on telling you about everything we’re doing.”

A big show-off opportunity arrives Saturday, March 2, at the second annual ASU Engineering Open House Family Day. Hundreds of students in ASU’s Ira A. Fulton Schools of Engineering will present exhibits and demonstrations of their knowledge and skills – including many interactive attractions – designed to both entertain and educate.

Among highlights will be a trebuchet demonstration. The 20-foot-high catapult-like device will be used by Topliff’s team to launch melons skyward, an activity he says has been an effective way to lure youngsters into learning some basic principles of math and mechanics.

The Open House crowd will see many other examples of engineering in action, says chemical engineering major Joe Carpenter.

“I think one of the traits of engineering students is that we are drawn to challenges. We like to take on the tough problems,” he says. “I think you’ll see students going above and beyond to put on a good show.”

The event has drawn more than 70 student teams – along with some faculty members – to prepare exhibits, says Katelyn Keberle, a materials science and engineering major who joined Topliff, Carpenter and several other students in organizing the event.

She says nearly all branches of engineering will be represented – from civil, environmental, electrical and chemical to mechanical, aerospace, materials, computer science, computer systems and biomedical engineering.

In addition, a number of the university’s labs, where students often assist in advanced research led by faculty members, will be open for tours.

“We want to give the public a better idea of all the things engineering makes happen in the world,” Keberle says. “Plus, we want to show the cool stuff we’re doing.”

The cool stuff will include the Vex Robotics State Championship Tournament. Throughout the day, 24 teams of middle school and high school students, and six teams of college students, will compete in different divisions for chances to advance to national and world championship Vex Robotics tournaments.

The success of the 2012 Open House has helped boost interest in field trip day this year. More than 1,600 students in grades three through eight are expected to participate. A jump in the Saturday crowd is also expected.

To learn more about the event, visit the Engineering Open House website.

Registration is encouraged, but not required. The first 500 registered guests who check in with their Eventbrite ticket at the information booth at the Student Recreation Complex fields, located in the southeast corner of campus, will receive a Fulton Engineering water bottle.

Visit the EventBrite site for registration and tickets.

All guests who check in will be entered into prize drawings held at noon and 3 p.m. You do not need to be present to win.

Your Passport to Engineering: At the event information desk, children can also pick up their Engineering Open House Passport. As they visit the exhibits noted as Passport Activities, they will receive a stamp. Showing their completed passport at the information booth on the Student Recreation Complex fields will get them a gift and an entry into a drawing for a cool engineering prize.

Along with the Engineering Open House, the ASU Tempe campus will be the site of two additional free public events on March 2 focusing on the sciences, engineering, technology, the arts and humanities.

Night of the Open Door will be presented by ASU’s College of Liberal Arts and Sciences, with partners including ASU’s Ira A. Fulton Schools of Engineering, the Center for Science and the Imagination, and the Biodesign Institute.

In addition, Emerge will present an entertaining fusion of arts, technology and visionary thinking with performances, exhibits and interactive demonstrations.

The Engineering Open House, Night of the Open Door and Emerge are part of the Arizona SciTech Festival, a series of more the 200 events that make up a state-wide celebration of science, technology, engineering, arts and math (STEAM).

There will be free parking on campus during each of the events on March 2 at the Apache parking structure at College Avenue and Apache Boulevard, the Rural and Tyler Street parking structures, and on the north side of the Gammage Auditorium parking lot.