Research grants from the National Institutes of Health (NIH) are among the hardest to obtain. More than researchers’ past accomplishments and the potential for the success of their projects are weighed in the decision-making process.

The NIH wants researchers who will use new and innovative approaches to making scientific and engineering advances. It wants discoveries the research produces to remedy significant problems, providing solutions that will have far-reaching impacts on improving the lives of the nation’s citizens. 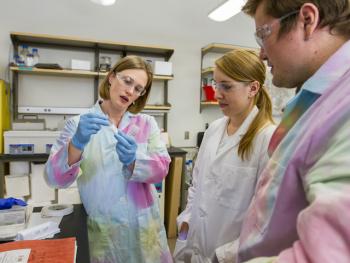 “Only the most promising proposals among those that meet all these criteria are getting grants,” said professor Marco Santello, director of the School of Biological and Health Systems Engineering, one of the Ira A. Fulton Schools of Engineering at Arizona State University. Santello also serves as grant reviewer for the NIH.

He said the hyper-competitive environment, as well as federal budget tightening, is what makes it remarkable that the biomedical engineers, physicists, neurophysiologists and synthetic biologists on the school’s faculty have been awarded several NIH research grants within the past year. The grants amount to more than $7 million in research support.

Assistant professor Rosalind Sadleir has been awarded NIH grants of $1.8 million and more than $400,000 for separate research pursuits to develop new imaging techniques for examining the fundamental processes of the brain, and for understanding mechanisms of treatments for neurological disorders and stroke.

Research led by assistant professor Karmella Haynes to design proteins that will prevent or arrest the development of cancer is being funded by a $390,000 NIH grant.

Xiao Wang, an assistant professor, will lead research supported by an NIH grant of more than $1.5 million to better understand the functions and behavior of the human body’s network of genes. The project is expected to provide knowledge to aid development of medical therapeutics, particularly regenerative medicine techniques.

The NIH awarded $400,000 to a project teaming Santello with researchers at the Mayo Clinic and the Italian Institute of Technology to pursue advances in technology to improve prosthetic hands.

Associate professor Brent Vernon’s $150,000 NIH Small Business Technology Transfer grant is supporting his partnership with Sonoran Biosciences to develop an innovative delivery system for antibiotics to fight infection in open fracture wounds. Sonoran Biosciences was founded by a team led by Derek Overstreet, who worked in Vernon’s lab while earning his doctoral degree in biomedical engineering at ASU. The project involves a clinical partnership with Alex McLaren, who is with the Banner Health Orthopedic Residency Program.

“For the school’s faculty to get this number of NIH grants in a short span of time is impressive, considering the competition,” said professor Raymond DuBois, executive director of the Biodesign Institute at ASU. “One of ASU's great strengths is the blending of technology science and basic science, and these new grants reflect a coming-of-age for that intersection.”

DuBois himself has been doing research with NIH support for about 25 years, and as much as 40 percent of the research at the Biodesign Institute is funded by the NIH.

The string of grants awarded to researchers in the School of Biological and Health Systems Engineering “demonstrates the depth and breadth of expertise among the faculty, and shows that they are doing research in really important areas,” DuBois said.

Just as extraordinary, Santello said, is that faculty members are earning the kinds of grants that have historically been awarded predominantly to researchers at universities with medical schools on campus.

“These grants are a stamp of approval, a recognition that we are doing research in a wide range of critical endeavors in health and biomedical engineering, and that we have developed a high-quality and thriving research environment,” he said.

Impact on quality of education

A key factor in establishing that reputation, Santello added, are the school’s expanding clinical partnerships with prominent medical institutions, such as the Mayo Clinic, Banner Health, Phoenix Children’s Hospital and Barrow Neurological Institute.

Also helping to bolster the school’s identity is that faculty members are competing for and earning highly sought-after support from other prominent funding sources, particularly the National Science Foundation, the Department of Defense, industry and prominent foundations.

Students in the biomedical engineering program are benefiting from the faculty’s success at attracting high-level research support, as well.

“Students get the opportunity to take classes taught by faculty members who are leaders in their fields, who have diverse specialties, who are involved in high-impact work and are committed to making significant contributions to engineering and science,” Santello said.

The Arizona Department of Health Services/Division of Behavioral Health has recently awarded a two-year contract to Arizona State University to coordinate a Peer Career Advancement Academy.

The Arizona Department of Health Services/Division of Behavioral Health has recently awarded a two-year contract to Arizona State University to coordinate a Peer Career Advancement Academy. The purpose of this academy is to provide advanced training and educational opportunities to certified peer specialists.

Peer specialists are individuals in recovery from mental illness and/or addiction who are employed by behavioral health care providers.

“People who have achieved and sustained recovery from mental health and substance abuse conditions are powerful supports for individuals seeking their own path to recovery,” says Kathy Bashor, bureau chief for the Office of Individual and Family Affairs, Division of Behavioral Health.

“Nowhere else in the U.S. is an innovative program like this available,” she says. “It gets individuals out of the system and into providing services.”

ASU’s Center for Applied Behavioral Health Policy will be coordinating this new initiative. Over the course of the next two years, the design of the Peer Career Advancement Academy will be finalized, and training tracks implemented for health and wellness coaches, special assistance advocates, housing support and supported employment specialists.

“One of the most powerful outcomes of peer support is that it has a mutual benefit. Peers not only help someone else, they help themselves,” says Vicki Staples, associate director for clinical initiatives for the center, which is part of the School of Social Work in the College of Public Programs.

“We are expanding opportunities for people in the community, and know that we’ll need to provide additional peer-delivered services in these areas,” says Staples.

Peer support services have been shown to facilitate recovery and reduce health care costs. Findings from Klein, Cnaan and Whitecraft (1998) on the use of peer support have documented reductions in hospitalizations, improved social functioning, reduced substance use and improved quality of life. Research has shown that peer support plays a part in reducing the overall need for mental health services over time. Peer support has also demonstrated outcomes in the areas of parenting, loss and bereavement, cancer and chronic illnesses.

“This is a great collaboration between state agencies, building a program from the ground up with community input,” Staples adds. “Ongoing community support will be critical to its future.”