A year-old program that seeks to energize Phoenix youth has been awarded an NFL Super Bowl Legacy Grant, as part of an NFL financial donation to the City of Phoenix for hosting the Super Bowl.

Among 27 awardees, the FitPHX Energy Zones program will receive $20,000 from the NFL grant to expand and strengthen its impact in encouraging Phoenix residents to lead healthier lifestyles. 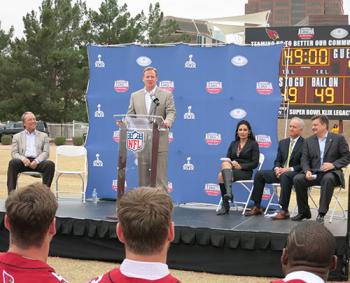 FitPHX Energy Zones is a program run by Mayo Clinic-Arizona State University Obesity Solutions – in partnership with the City of Phoenix Mayor’s Office, Phoenix Parks and Recreation, Phoenix Public Libraries and Maricopa County Department of Public Health – that is delivered to underserved youth in Phoenix by way of public libraries.

The program is part of the citywide FitPHX initiative, led by Mayor Greg Stanton, councilman Daniel Valenzuela and Olympic gold medalist Misty Hyman, with the goal of making the Phoenix area one of the healthiest in the nation.

Encouraging residents to lead healthier lifestyles by focusing on childhood and adult obesity, nutrition education, active infrastructure and healthy worksites, as well as walking, bicycling and the use of public transportation, the initiative looks to engage 10- to 14-year-old children in underserved Phoenix neighborhoods through the Energy Zones program by using ASU interns as peer mentors and public libraries as fitness venues.

Youth are engaged in public libraries, where many already spend time after school while their parents work, and where the St. Mary’s Food Bank provides a healthy after-school snack for kids who qualify for the federal school lunch and breakfast programs.

To date, roughly 100 Phoenix youth and 27 ASU interns from a variety of health-related majors have participated in FitPHX Energy Zones.

Each year, the NFL provides a financial donation to its Super Bowl host city to support charitable causes in surrounding communities. This year the NFL Foundation offered a $1 million grant through the Arizona Community Foundation. The grant was matched by the Arizona Super Bowl Host Committee, bringing the total to $2 million. 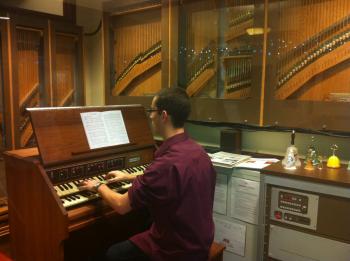 Entries are due March 15. The prize is a $250 cash award, underwritten by Kenneth and Laurie Polasko of Scottsdale, and the debut performance of the award-winning work at a carillon concert.

For a list of official rules, facts about the carillon and information about how to enter the contest, contact Carl Cross, co-chair of the ASU Carillon Society, at carl.cross@asu.edu or 480-965-2113. Or, contact Jody Rockmaker, associate professor of composition in the ASU School of Music, at jody.rockmaker@asu.edu or 480-965-2534.

The Symphonic Carillon was a gift from Associated Students to the university in 1966. It is a memorial to those in the ASU community who gave their lives for their country. For more information about the carillon go to www.asu.edu/carillon.