A News21 student-led investigation on voting rights in the U.S. will be the subject of the next fall 2012 Humanities Lecture Series at the Downtown Phoenix campus.

Kristin Gilger, associate dean of the Walter Cronkite School of Journalism and Mass Communication, and several student journalists who participated in the groundbreaking Carnegie-Knight News21 program, “Who Can Vote?,” will share their experiences and triumphs in a panel discussion set for 6:30 p.m., Oct. 11, at the Nursing and Health Innovation Building Two, 550 N. Third St., Innovation Auditorium, room 110. The lecture, “News21 Voting Rights Project,” will be hosted by ASU’s School of Letters and Sciences and is free and open to the public. Parking is also free after 6 p.m. on all public streets and meters.

Gilger, who helped supervise the project, called the work produced by students “remarkable.”

“There has been so much discussion about voter fraud, and the students wanted to find out how much fraud really exists. They traveled to more than 40 cities, 21 states and one U.S. territory, conducted more than 1,000 interviews, requested thousands of public records and reviewed nearly 5,000 documents,” she said. “Their most ambitious effort was to gather, organize and analyze all reported cases of election fraud in the U.S. since 2000, building the most comprehensive database of its kind.”

AJ Vicens, Jack Fitzpatrick, Corbin Carson and Natasha Khan, all ASU journalism students who worked on the project, will join Gilger on the panel. Brandon Quester, a recent Cronkite graduate who served as multimedia editor for the project, also will participate.

The project involved 24 students from 11 universities and began in January 2012 with a video-conferenced seminar taught by Leonard Downie, Jr., former executive editor of “The Washington Post” and Weil Family Professor of Journalism at the Cronkite School. The students heard from multiple experts, conducted interviews and did extensive research on voting rights. They then spent 10 weeks this summer working out of the Cronkite School to report and produce dozens of articles, photos, videos and interactive graphics. The project can be found at votingrights.news21.com.

The panel will discuss some major findings, including voters ID laws, fraud, frequent mistakes and errors and eligibility requirements.

For Vicens, a Cronkite School graduate student, the project was a journalistic benchmark.

“It was an amazing experience that allowed us to do quality journalism,” Vicens said. “The school gave us guidance, time for research and travel, editing and constructive criticism to put together a comprehensive package. The result speaks for itself.”

Major national news organizations, including “The Washington Post”, nbcnews.com, “The Philadelphia Inquirer” and the Center for Public Integrity, have published all or portions of the project. All told, in the first month of publication, the project drew nearly 90,000 page views and more than 10,000 comments on news websites as well as more than 17,000 comments, likes and shares on Facebook and more than 18,000 tweets. The results were cited on “The Daily Show with Jon Stewart”, “The Diane Rehm Show”, “The Rachel Maddow Show” and several other radio and television programs, and the project was the subject of a New American Foundation event on voting rights in Washington, D.C.

Lemon and 'County of Kings'

Acclaimed writer and Tony Award-winning stage artist Lemon Andersen talks about his life and experiences on Broadway in anticipation of his upcoming performances at ASU Gammage.

Lemon and 'County of Kings'

ASU’s Project Humanities intern JJ Hernandez spoke with Lemon Andersen, acclaimed writer and Tony Award-winning stage artist visiting ASU this week. They discussed his life, his experiences on Broadway and his upcoming performance of his one-man staged memoir, “County of Kings," presented by ASU Gammage on Oct. 5 and 6, as part of its BEYOND series, committed to expanding the theatrical paradigm. 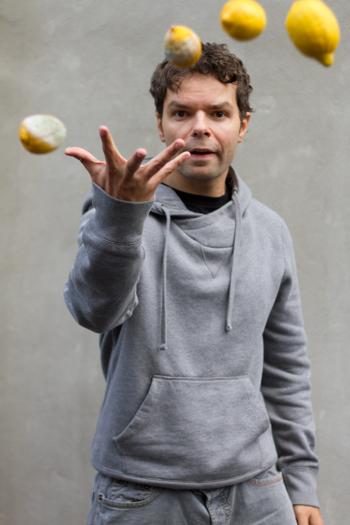 They initially talked about his plans for the week.

“You know, I’m going to go train," Andersen said. "Hopefully find some time to get ready for the show. I know it’s a big space. So it’s about being able to find what a solo show looks like in a space usually filled with an ensemble – it’s about air and lungs. I mean to do well. ASU has been one of the top presenters for us. Usually you go in and go out. But here it’s always been a warm welcome.”

“Some guys go to prison and lose their minds, but I went and found time to read," he said. "I was part of a culture in prison where guys were trying to outsmart each other with books.” He says that he can actually recall arguments between his fellow convicts over the difference between knowledge and wisdom, a conversation that one might be hard pressed to find in a typical secondary education classroom anywhere.

Only after serving his time did Lemon begin to write. “I didn’t know what to write until I went to an open mic, and I saw these guys reading poetry. I never even knew guys read poetry like that, with that much integrity and that much passion.

“Spoken word poetry, to me, is the only art form that allows the wounded to entertain themselves. The scarred, the raped, the pillaged, the communities that have been taken over by America. They go up on these stages and get to say what they want to. Where in rap music they don’t get to do it. They’re edited; they’re produced. There are too many filters in the way for them to end up with the original voice. But theater says, 'Hey, you can entertain? Then it doesn’t matter what you say.'"

His first opportunity came unexpectedly at that first open mic after writing and performing a poem on the spot. “This woman came up to me with a job. She said, ‘You want to be in theatre?’” As someone with a criminal record struggling to find work, Lemon immediately took the position.

“When I got to the job, I realized we were kind of boring. It was in a theatre troupe and we were doing skits on prevention and violence. It was community center stuff. I said to myself, ‘I have to find a way to make this fun.’” Andersen continued to write and perform poetry while working days at theatre troupe. “Next thing you know, I was doing poetry to find work and theatre as a day job. And then Def Jam came in.”

Even though Lemon was featured on the acclaimed Def Poetry Jam on HBO, his ambition did not end with a one-time appearance. “I didn’t want to get on Def Jam Poetry, I wanted to stay on. I wanted to learn, like I do now, I still do. I show up and I’m asking questions. I wanted to learn and make things work for the team. I wanted to know what the editors and producers wanted. What voices are missing? It caused me to end up on the Def Jam Poetry Broadway show.”

The experience led to Lemon traveling with Def Jam Poetry to San Francisco where they stayed for six weeks honing and developing the act into a full-blown Broadway production. He describes how pressure from producers and directors had everyone fighting for a spot on the show.

“Everyone thought they were going to be cut out. Everyone was nervous. So here I come. There were slam poets doing back flips and magic tricks with their words, and I’m just going up there putting out characters. But their words to me were, ‘We don’t want to change anything. We think what you do is what everyone else needs to do.’ That’s when I knew I was good to go. Then the biggest problem came. We won the Tony award, but Def Jam Poetry was over.”

Andersen explained that he was met with tremendous opportunity after the critical success of the show. He was featured opposite of Denzel Washington in the film, "Inside Man," and went to do further work with director Spike Lee. But still, he felt dissatisfaction.

“I was unhappy because I had no poetry career," he said. "It was over. I literally went a year and half without a single show. That’s crazy. I started to panic and get anxiety. I lived by the law, back then, of what people would think about me.”

"Lemon," a documentary directed by Laura Brownson and Beth Levinson, is set to premiere in three weeks on PBS, follows Andersen during this period.

It was during this time that Andersen began to develop a one-man show, a staged memoir, which pulled him back into the theatrical sphere. He realized that this show was to be his opportunity to define himself.

Andersen says that the idea for his theatrical memoir came from his days with Russell Simmons Def Poetry Jam. He had his first interview with The New York Times and the interviewer was astounded to learn that Lemon was a three-time felon. “He was like, ‘Wait. You went to prison? And you’re on Broadway?’ I said to myself, ‘Let me stop giving this story away and write it myself.’”

In retrospect, Lemon says it took five years to get his career off the ground. Today, a part of that career is investing in his community. “I just want to help people, just by telling stories. There’s something about that single mother walking her kid to school, traveling an hour into the city, falling asleep on the train so her kid can go to a good school. Someone has to tell that story. She’s not going to tell it.”

Tonight, Lemon will be teaming up with local spoken word performer Myrlin Hepworth of Phonetic Spit to host a free open mic in the Gammage VIP Lounge Wednesday, Oct. 3, at 7:30 p.m. Phonetic Spit is a Phoenix-based organization that brings the poetry to the Arizona’s youth. One thing Hepworth teaches his students is the idea of pain’s relativity, that we should not compare each other’s pain. I asked Andersen’s thoughts on this concept.

“Sometimes I struggle, you know? I teach both students who are well off and students who come from tough economic situations, and sometimes when I go to these private schools to teach, I don’t want them to think my struggle is the only struggle. They have stories to tell as well, and I try to identify pain with just pain. Rich or poor, it still hurts. I like to teach all people. The theatre usually brings out an audience that’s not familiar with my world. When you’re walking down the street, you’re scared of the guy yelling and screaming, or you’re scared of the guy who has a bop in his step just to be defensive. I get to be able to tell that person’s story in front of that audience. There’s a revolutionary act in that. That to me is where I serve that purpose.”

Finally, Hernandez asked Lemon for the one question that he would ask himself in any interview. “I guess it be, ‘Do you feel like you’re only limited to one voice, an urban voice? Or do you think you can crossover?’ And the answer to that is: I better. Why? Because I would hate for someone else to have the job I always wanted. You know, I want to work on a "Star Wars" television show. I would hate to not be a writer on that show. It would destroy me!”

“County of Kings” brings Lemon Andersen’s history to extraordinary life. It is a work that aims to open conversation vastly different worlds, hopefully bringing much needed understanding. Starting next Monday, Lemon Andersen will begin work on his new fictional play, "Toast," which will feature eight characters set in Attica, New York in 1971 just prior to the infamous Attica Prison Riot.