A newly launched website provides a comprehensive look at the innovations that are part of ASU's growing partnership with Mayo Clinic.

The website – mayo.asu.edu – summarizes ongoing research and initiatives, as well as opportunities for students, faculty, staff and the public, to help transform health care and medical education. 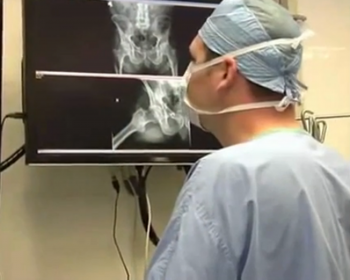 Areas highlighted on the site include:

• Media coverage of the Mayo-ASU partnership;

• History and timeline of the partnership;

This fall Mayo Clinic announced the expansion of Mayo Medical School in Rochester, Minn., to Arizona. With ASU being a key collaborator of the new Mayo Medical School - Arizona Campus, there is a growing list of new collaborations under way, including a new specialized Science of Health Care Delivery master's degree to address the changing needs of 21st century health care.

Since 2003, Mayo Clinic and ASU have worked together on a variety of successful efforts to improve health care delivery and enhance Arizona's medical education profile.

Through careful curation and management, ASU's meteorite collection has prospered and has lived up to all the hopes and aspirations expressed when it was established 50 years ago.

Arizona State University is home to the world’s largest university-based meteorite collection. Consisting of specimens from more than 1,650 separate meteorite falls, today’s ASU Center for Meteorite Studies collection is significantly larger than the almost 700 specimens that seeded the cache 50 years ago. Through careful curation and management, as well as the addition of enviable analytical capabilities, the collection blossomed and the center evolved into an intellectual hub for research on meteorites and other planetary materials. 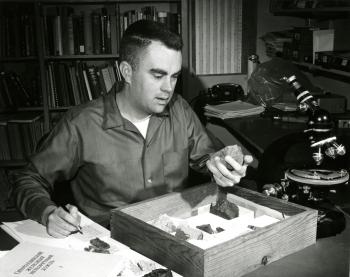 Two separate events helped lead ASU down the path of meteorite research. First, the Soviet Union launched Sputnik in October 1957, putting space at the forefront of American consciousness. Second, Harvey H. Nininger, the famous meteorite hunter and self-taught meteoriticist, sold a portion of his collection to the British Natural History Museum in 1958. The sale marked a loss for the state, as the museum housing Nininger's extensive collection had been originally located near Barringer Meteorite Crater in northern Arizona and then, later, in Sedona, Arizona.

Boyd was familiar with Nininger's collection and recognized its importance to both Arizona and to ASU's pursuit of research in an up-and-coming discipline. Boyd, working with the chair of ASU’s chemistry department, Clyde A. Crowley, and ASU President Grady Gammage, solicited a grant from the National Science Foundation (NSF) to purchase the remainder of Nininger's collection and bring it to ASU. To strengthen its proposal, ASU offered supporting funds from both the ASU Foundation and Herbert G. Fales, the vice president of International Nickel Company, who was familiar with Nininger through his own interest in meteorites.

The NSF recognized the importance of keeping the remainder of Nininger's collection in the United States and accepted ASU’s proposal on June 8, 1960.

“This was always in the plans and wishes of Nininger that we got the collection from him,” explains ASU Emeritus Professor Carleton B. Moore, founding director of the center.

Recruiting Moore to ASU was a well-researched, multi-step process. Boyd and George M. Bateman, the chair of the division of physical sciences, initiated the search for a director responsible for curating, managing and studying the collection. They consulted with Harrison S. Brown, a geochemistry professor at the California Institute of Technology, who was one of the few scientists in the nation actively studying meteorites, to find a worthy candidate. Brown was also familiar with Nininger and his collection; he had obtained samples for study from Nininger and had also visited Nininger's museums with his students. Brown recommended one of those students, Moore, for the directorship. Acting on behalf of ASU, Fales flew to Wesleyan University where Moore was teaching at the time, to recruit him. Moore agreed to take the position.

In spring 1961, the initial activities of the Center for Meteorite Studies, christened by new ASU President G. Homer Durham, commenced at ASU under the direction of Moore.

“When I came there were very few of us that knew anything about meteorites,” says Moore, who was 29 years old when he began his career at ASU. “At that time, it was mostly chemists who studied meteorites.”

In keeping with the fact that the most well-established scientists studying meteorites at the time were chemists, the care of the collection and promotion of its study was designated to ASU’s chemistry department.

“In the beginning, we just had a small room in the C-wing basement and everything was in steel cases; that’s where they put the meteorites before I came. And then chemistry abandoned a lecture room between the C wing and the B wing and we were given part of that for the meteorites,” says Moore. “We eventually moved again to where the vault is now.”

One of the NSF grant’s stipulations required that ASU would make specimens available to researchers around the world. Many worried that the new university would buckle under the demands, and the collection might be lost. To allay concerns, the NSF required the center to have an oversight advisory committee that consisted of representatives appointed by the National Academy of Sciences, NSF, Smithsonian, state of Arizona and American Museum of Natural History.

“Many in big schools weren't sure a place like ASU could take care of the specimens. They thought it was crazy sending this valuable meteorite collection here,” explains Moore.

Moore and his team successfully demonstrated that it was indeed possible to provide research materials to qualified users without degrading the collection. Since then the center has become a model for museums, which previously merely displayed meteorites, to follow suit and open their collections freely for research pursuits.

Peter Buseck, now a Regent’s Professor in ASU’s School of Earth and Space Exploration, was among the first ASU professors to actively put the center’s collection to use for scientific study. His diverse research portfolio has contained meteorite-related topics since soon after his arrival at ASU in 1963, and has involved dozens of students and postdoctoral researchers who contributed and continue to contribute significantly to meteorite science.

Bringing the Moon to ASU

Over the years, under the watchful eye of Moore, the collection grew exponentially through purchases, exchanges and donations.

The center’s own research reputation also flourished under Moore’s direction. Moore himself played a leading role in ASU’s efforts of building up the young university’s research portfolio, acquiring 35 research grants in materials science and geology from NASA, NSF and the U.S. Geological Survey from 1963-1987.

“I went to a meeting of meteorite curators in London in 1962 and there Howard Axon encouraged me to be interested in carbon,” says Moore. “This led me to be in the first groups to unambiguously identify amino acids in the Murchison and then Murray meteorites.”

Moore not only analyzed carbon in meteorites but in other types of extraterrestrial specimens as well.

The experience and success of the center's team in studying meteorites led to Moore’s inclusion on the team of scientists assigned to analyze Moon rocks returned from 1969 to 1972 by Apollo astronauts. At that time, the center was the only facility with proven analytical capabilities in place for measuring the low abundances of carbon and other volatile elements in rocks, so Moore flew to Houston to pick up the Apollo 11 samples and brought them back to ASU for analysis. These analyses, along with discussions with Jack Larimer, who was hired by the center with a joint appointment in ASU’s geology department, helped Moore and his team understand the sources of lunar carbon. The ASU team ultimately analyzed more than 200 lunar samples.

This work bolstered the reputation of the center as a research facility, and also set the stage for the study of other types of planetary materials by ASU researchers in the future.

“I hired Ron Greeley, who in turn hired Phil Christensen,” says Moore. “The center really did what it was supposed to – it started all this space research.”

Yielding major scientific contributions was not the center’s only focus. Since its inception, the center has focused on educational and public outreach activities. In 1967, the center opened a museum in the Bateman Physical Sciences C-wing.

“Chemistry expanded and that gave us meteorite space so Chuck Lewis and I made that little museum,” says Moore. The museum initiated by Moore is still in operation, but the majority of meteorites are catalogued and stored in a secure room, in boxes, on shelves and in drawers. “Outreach is not new; we’ve been doing it for a long, long time.”

After more than 40 years of dedicated service, Moore retired from ASU in 2003 but to this day he actively participates in the center’s education and public outreach activities, and numerous public speaking engagements that reach hundreds of educators, students and members of the public each year.

“The number of specimens in the collection never went down,” says Moore. “It was part of the obligation: We should never lose anything, we should never waste anything.”

Former NASA administrator Laurie Leshin was a professor in the ASU department of geological sciences and an ASU alumna, when she was named the new director after Moore retired. In 2006, Meenakshi “Mini” Wadhwa, then curator of meteoritics at The Field Museum of Natural History in Chicago, was named director of the center and professor in the School of Earth and Space Exploration in ASU’s College of Liberal Arts and Sciences.

Through careful management and grants and contributions, ASU’s meteorite collection has prospered and has lived up to all the hopes and aspirations expressed when it was established. Today, the collection is actively used for geological, planetary, and space science research at ASU and throughout the world. There’s every reason to predict that the center will continue to build upon it enviable reputation.