Concealed within the vastness of the human genome, (comprised of some 3 billion base pairs), mutations are commonplace. While the majority of these appear to have a neutral effect on human health, many others are associated with diseases and disease susceptibility.

Reed Cartwright, a researcher at Arizona State University’s Biodesign Institute, along with colleagues at ASU, Washington University and the Wellcome Trust Sanger Institute, Cambridge, UK, report on a new software tool known as DeNovoGear, which uses statistical probabilities to help identify mutations and more accurately pinpoint their source and their possible significance for health. 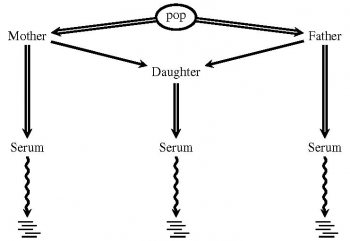 Improvements in the accuracy of mutation identification and validation could have a profound impact on the diagnosis and treatment of mutation-related diseases.

“These techniques are being considered in two different realms,” Cartwright says. “The first is for pediatric diseases.” Here, a child with an unusual genetic disease may undergo genomic sequencing to see if the mutations observed have been acquired from the parents or are instead, unique to the child. “We can identify these mutations and try to detect which gene may be broken,” he says.

The second application is for cancer research, where tumor tissues are genetically compared with normal tissue. Many now believe that the identification of a specific cancer mutation may eventually permit clinicians to customize a treatment for that tissue type. “We are developing techniques to allow researchers to make those types of analyses, using advanced, probabilistic methods,” Cartwright says. “We actually model the whole process.”

Indeed, the method described provides the first model-based approach for ferreting out certain types of mutations. The group’s research results appear in today’s issue of the journal Nature Methods.

One of the primary goals in genetics is to accurately characterize genetic variation and the rate at which it occurs. Searching for DNA mutations through genetic sequencing is an important ingredient in this quest, but many challenges exist. The current study focuses on a class of mutations that play a critical role in human disease, namely de novo mutations, which arise spontaneously and are not derived from the genomes of either parent.

Traditionally, two approaches for identifying de novo mutation rates in humans have been applied, each involving estimates of average mutations over multiple generations. In the first, such rates are measured directly through an estimation of the number of mutations occurring over a known number of generations. In the second, or indirect method, mutation rates are inferred by estimating levels of genetic variation within or between species.

In the new study, a novel approach is used. The strategy, pioneered in part by Donald Conrad, professor in the Department of Genetics at Washington University School of Medicine and corresponding author of the current study, takes advantage of high throughput genetic sequencing to examine whole genome data in search of de novo mutations.

“This collaboration started a few years ago, when Donald and I were both working on mutations for the 1,000 Genomes project,” Cartwright says, referring to an ambitious project to produce a comprehensive map of human variation using next-gen sequencing.

The mutations under study may take the form of either point mutations – individual nucleotide substitutions, or so-called indel (insertion-deletion) mutations. In the latter case, single nucleotides or nucleotide sequences may be either added or subtracted from the genome.

While point mutations and indel mutations can both have adverse effects on health, indels are significantly more difficult to identify and verify. They have a strong potential to cause havoc when they occur in coding portions of the genome, as the addition or deletion of nucleotides can disrupt the translation process needed to accurately assemble proteins. (The current study is the first paper to use model-based approaches to detect indel mutations.)

In reality, such efforts are complicated by a number of potential sources of error, including insufficient sampling of the genome, mistakes in the gene sequencing process and errors of alignment between sequences. The new method uses a probabilistic algorithm to evaluate the likelihood of mutation at each site in the genome, comparing it with actual sequence data.

Human cells contain two copies of the genome – one from each parent. For most positions in the genome, the bases from each parent are the same or homozygous, but occasionally, they are different or heterozygous.

Errors derived from conventional methods can take the form of false negatives, particularly when gene sequencing misses heterozygous sites in the genotype of the child. On the other hand, failure to identify a heterozygous site in one of the parents can lead to a false positive result.

In the current study, data from the 1,000 genomes project was analyzed using DeNovoGear, with markedly improved accuracy. The technique will assist ongoing efforts to better understand which mutations contribute to sporadic disease or cancer in individuals, the distribution of mutations and their characteristics across populations.

The power of this technique comes from its probabilistic model, which calculates the probability of a de novo mutation at a site based on estimations of mutation rates, sequencing error rate and the initial genetic variation in the population from which the parents arise. This model is able to consider multiple explainations for experimental observations and decide between them. The probabilities are used to indentify candidate loci, which are then evaluated using target resequncing.

Given adequate data of genetic pedigree, the method is able to distinguish germline from somatic mutations in an automated manner with high accuracy.

“Our goal is to develop software that will allow researchers and clinicians to estimate a range of mutation types, faster, more accurately and cheaper,” Cartwright says.

In addition to further refining the DeNovoGear software, Cartwright’s group plans to more closely examine normal human tissue in order to establish rates of somatic mutation. Some of the specific mutations currently associated with cancer for example, may actually be part of normal variability, which appears to be much greater than originally assumed. “No one has really looked at this at the level we’re interested in.”

A team of ASU professors have developed a mobile application that allows their record keeping with reptiles to be more accurate and faster than traditional paper methods.

Accurate sampling methods are vital to any scientific study, but for researchers estimating wildlife populations, data errors can occur while recording measurements from live animals in the field, and again when data are entered into a database. A team of Arizona State University professors in the College of Technology and Innovation (CTI) have developed a mobile application that allows their record keeping with reptiles to be more accurate and faster than traditional paper methods.

The idea of developing an app was suggested by assistant professor Heather Bateman, along with Timothy Lindquist, professor, and Richard Whitehouse, lecturer. Undergraduate and graduate students at CTI worked with Bateman, Lindquist and Whitehouse to develop the app. 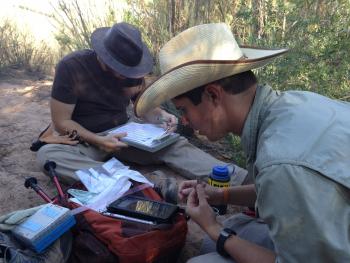 Part of Bateman’s research includes studying lizards and other reptiles by using capture-mark-recapture approaches, which involves capturing an animal in the field, recording identifiable traits of that animal and immediately releasing it back into its natural habitat. This process calls for tracking to be done on-site, usually handwritten, and then information is entered into a database upon returning to a computer.

Because each animal is given a unique code when being handled in the field, the researchers need to be certain they don’t accidently give two animals the same code. Before the app was developed, the unique codes were stored on a datasheet, requiring the technician handling the animal to mark out the used code. Problems arose when technicians neglected to cross out the code on the paper and accidentally assigned two or more animals with the same code. Oftentimes these errors were not realized until entering data back at the lab – long after the animal was released.

“We realized this was a problem for us, and probably a problem for anyone who collects data in the field,” Bateman said. “Not having a way to track electronically while on site meant we couldn’t immediately check for errors or duplications.”

The app, developed for mobile devices on iOS and Andriod platforms, is a digital method of tracking this information and automatically exports raw data to a computer where results can be analyzed. The user can record the same information on their smartphone they would in a traditional recording method. The mobile app uses pre-populated dropdown boxes and data proofing steps to guide the user through a process to enter information about an animal’s species, unique code, body length, mass and sex. Bateman says while comparing methods, student users recorded and entered data 50 percent faster and were more accurate while using the app over traditional data-entry methods.

Although there are data entry apps available, and even apps for wildlife biologists, Bateman says this app is the first developed for recording wildlife information with the capability of producing unique codes and querying a database of animal histories stored on a mobile device.

“We are so excited we have found a method that works and that reduces errors,” Bateman said.

Currently, the app is unavailable for download, but Bateman and her team are hoping to collaborate with other teams who would be able to bring this app to the App Store and Google Play.

The full story of Bateman’s app development and findings has been published this week in the Wildlife Society Bulletin.

Written by: Sydney B. Donaldson