The GeoDa Center for Geographical Analysis & Computation, led by ASU Regents’ Professor Luc Anselin, has just released a new version of its signature software, OpenGeoDa. The software provides a user-friendly interface to implement techniques for exploratory spatial data analysis and spatial modeling. It has been used to better understand issues ranging from health care access to economic development to crime clusters.  It is freely downloadable and open-source.

The software is used internationally, with more than 75,000 unique downloads, and lab installations at universities such as Harvard, MIT and Cornell.  The new version, OpenGeoDa 1.2.0, provides the most significant enhancements since the first release in 2003. 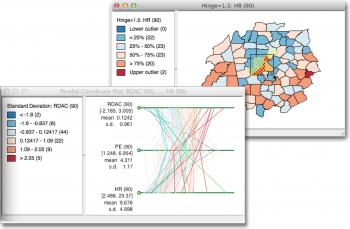 A key addition in the new version is space-time analysis – maps and charts that make it possible to track changes in spatial patterns over time.

“For example, a series of maps could plot variations in educational achievement by school district, for a series of years,” says Anselin. “An individual map would show clusters of high and low achievement; but adding the dimension of time makes it possible to assess the effect of a policy intervention, by comparing both achievement levels and spatial clusters, before and after the intervention.”

Another powerful capability is the real-time link between maps, graphs and statistical summaries of the same data set.  For example, researchers have used OpenGeoDa to explore the relation between crime and social deprivation, which turns out to hold in urban but not necessarily in rural areas.  Using OpenGeoDa, a cluster of high-crime regions can be selected on a map; and data for various socioeconomic aspects of each region will highlight on a graph.  Descriptive statistics for the cluster – as distinct from the entire map area – will also appear.

The new version of OpenGeoDa can show how these relationships vary over time, and offers live links between the maps and different chart types such as scatter plots, histograms, box plots, parallel coordinate plots, 3D plots, conditional maps or plots, and bubble charts. Bubble charts are entirely new to OpenGeoDa and can visualize four variables by varying the size and color of scatterplot points.

OpenGeoDa runs on the National Center for Health Statistics’ Research Data Center’s servers;  allowing researchers to use the software to analyze microdata not available elsewhere.

Luc Anselin, who has led development of OpenGeoDa from its origins to the present version, is director of ASU’s School of Geographical Sciences & Urban Planning in the College of Liberal Arts and Sciences as well as holding the Walter Isard Chair. Mark McCann is the principal software engineer of OpenGeoDa. The development of GeoDa and related materials has been primarily supported by the U.S. National Science Foundation/ the Center for Spatially Integrated Social Science (CSISS) and more recently by the National Institutes of Health and the National Institute of Justice.

Ceremony to mark opening of new facilities at Polytechnic campus

The university community and the public is invited Sept. 18 to the ASU Polytechnic campus for the grand opening of Century Residential Hall and the Citrus Dining Pavilion.

Ceremony to mark opening of new facilities at Polytechnic campus

The university community and the public is invited to ASU's Polytechnic campus for the grand opening of Century Residential Hall and the Citrus Dining Pavilion at 2 p.m., Sept. 18.

ASU President Michael Crow and Inland American Communities will host the grand opening at the Polytechnic campus located at 7001 E. Williams Field Road in Mesa.Parking is available in Lot 10 for attendees. Click here for a parking map.

After the opening ceremony, guests are welcome to tour the facilities and dine in the Citrus Dining Pavilion.

"Century Hall and the new Citrus Dining Pavilion at the Polytechnic campus are both examples of living and learning laboratories where students integrate their academic experiences into their lived environment," said Aaron Krasnow, dean of students at ASU's Polytechnic campus. "Students were involved with the conceptualization, design and now the programming of the new residence hall, giving them ownership and a sense of community.

"At the Polytechnic campus we provide all students this well-rounded campus experience to ensure that they are academically successful."

The brand new Century Hall is a three-story, 84,000-square-foot building, featuring residence wings that create an environment where students live and learn with other students who share the same major. The residence wings also allow students to more easily interact with faculty, and provide them access to academic resources and student services outside of the classroom.

Inland American Communities has funded the construction of the $13.4 million residence hall.

The Citrus Dining Pavilion is located on the north side of Texas Mall, immediately north of the Student Union, and is a single-story facility designed to serve up to 1,200 students. The dining facility consists of a 350-student dining room, a private dining area, open cooking servery and exterior seating on three sides that offers connections to the existing campus. In addition, the facility has a small grocery store and café.

The dining facility will be a LEED silver building and will be a critical social linkage between the freshman housing on the west and the student recreation center on the east.

ARAMARK will be the dining service provider.

The total cost for the dining facility is $10.1 million. No state dollars or tuition revenues are being used to fund the residence hall or dining facility.