Scientists at Arizona State University have discovered that ants utilize a strategy to handle “information overload.” Temnothorax rugatulus ants, commonly found living in rock crevices in the Southwest, place the burden of making complicated decisions on the backs of the entire colony, rather than on an individual ant.

In a study published online in the scientific journal Current Biology, Stephen Pratt, an associate professor in ASU’s School of Life Sciences in the College of Liberal Arts and Sciences, and Takao Sasaki, a graduate student in Pratt’s lab, suggest that the key to preventing cognitive overload is found in collective decision-making, rather than in multi-tasking. 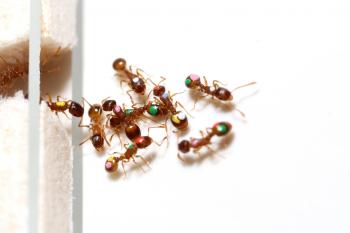 "I think the reason people are interested in this is because as humans, we can become overloaded with information – and that can possibly be detrimental both to our health and to how effectively we make decisions,” Pratt said. “There's a sense that as a society, we are being more and more overwhelmed by information.”

Previous research has shown that ant colonies have the ability to compare the quality of two potential nest sites – even if no single ant visits both sites. Pratt and Sasaki hypothesized that a colony could choose a high-quality nest from many more options more effectively than individual ants, because each member of the colony assesses only a small part, or portion, of available sites, and then shares the information with the entire colony.

“People usually think of ants as sort of stupid, that they can't really compare options, or that they don't have good cognition,” said Sasaki. “But actually, individual ants can compare options, and that's why they, too, experience cognitive overload – a well-documented phenomenon in human beings.”

The pair designed experiments with artificial nest sites to evaluate the ants’ decision-making abilities. Both colonies and individual ants were given two levels of tasks. Ants had to choose between two nests, or they had to choose among eight nests. In both experiments, half the nests were unsuitable. Nests are frequently chosen based on entrance and cavity size, as well as darkness and other features.

Researchers discovered that individual ants made much worse decisions when faced with eight options rather than two, meaning that they experienced cognitive overload. Colonies, on the other hand, did equally well with either two or eight options, showing that they could handle the harder problem as a collective.

The study shows what Pratt believes to be the answer to two questions: What do you get out of being a collective intelligence? And secondly, why and how is a group smarter than an individual?

“Living in a group is costly in many ways, so ants must get some benefit from doing it,” said Pratt. “By sharing the burden of decision-making, colonies avoid the mistakes that a solitary animal makes when taking on too much information. What’s great about these ants is that we can see exactly how they do this, by making sure that no ant has to process more information than it is able to.”

Pratt added that this is one problem ants can solve, but that there are other problems ants face that we might be able to learn from.

“What we really want is a more complete understanding as to how this society works as a kind of distributed brain,” Pratt said. He believes their research may provide insight into how to handle information excess in society and will have applications in collective robotics.

This study was supported by grants from the National Science Foundation (1012029) and the Arizona State University Graduate Research Support Program.

A new center at ASU aims to cultivate a network of imaginative thinkers to reignite humanity’s grand ambitions for innovation and discovery.

New center collaborates with Intel and Society for Science & the Public to drive broad public engagement by combining humanities, arts and sciences

A new center that brings together writers, artists, scientists, engineers and others to cultivate a network of imaginative thinkers to reignite humanity’s grand ambitions for innovation and discovery has opened at Arizona State University. 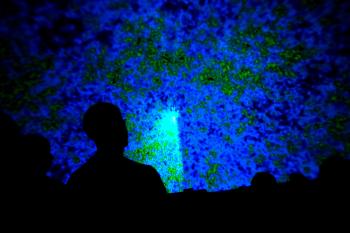 The goal of ASU’s Center for Science and the Imagination is to leverage the talent of ASU’s faculty and encourage researchers across disciplinary and institutional boundaries to take creative approaches and create broad public engagement around scientific challenges.

Ed Finn has been appointed director of the center. He joined the ASU faculty as an assistant professor with a joint appointment in the School of Arts, Media and Engineering and the Department of English.

“This center seizes a unique opportunity in higher education to bring great minds together,” Finn said. “We will encourage writers, scholars, designers, artists, engineers and researchers from many disciplines to ask challenging questions and collaborate radically to re-imagine technologies and discoveries just visible over the horizon.”

The Center for Science and the Imagination has two flagship projects, Hieroglyph and Tomorrow Project USA.

Building on a partnership with a group of science fiction writers led by Hugo Award winner Neal Stephenson, Hieroglyph is a collaboration between writers and scientific researchers. Its goal is to create techno-optimistic visions of the near future based on technologies and concepts that already are or will soon be realized.

Co-editors Finn and Kathryn Cramer, an award-winning science fiction anthologist, writer and critic, will produce an anthology of near-future narratives from Stephenson and other high-profile authors under contract with HarperCollins. Writers will work with scientists, engineers and others to advance their visions, sharing work in progress and ongoing conversations on hieroglyph.asu.edu. This website will invite researchers, students and the general public to engage with the narratives and one another, as well as to contribute their own responses.

The goal of Intel’s Tomorrow Project is to have conversations about the future so that we can make that future better. To further this goal and share productive, science-based conversations with new audiences, Intel is collaborating with the Center for Science and the Imagination. ASU’s new center will host Tomorrow Project USA, a platform for globe-spanning, science-based discussions fueled by a writing competition open to college students everywhere.

“To imagine a better future and then build it, we need to change the story we are telling ourselves about the future we want to live in,” Brian David Johnson said. “Together with the Center for Science and the Imagination and the Society for Science & the Public, we will explore the kind of futures we want to work toward.”

Working in collaboration with Intel and the Society for Science & the Public, ASU will run an innovative writing competition geared at college students worldwide, asking them to contribute science fiction stories and essays on the theme of green dreams and sustainable futures.

“The Society has provided some of the world’s leading science resources and competitions since its launch in 1921, including the Science News family of publications and the Intel International Science and Engineering Fair, to be held in Phoenix in 2013,” Marincola said. “These programs provide a tremendous reach to students and the general public and a unique platform to help meet the goal of the Tomorrow Project to foster productive, science-based conversations about the future.”

The Tomorrow Project anthology will be distributed free in print and online through the new website us.tomorrow-projects.com that also will feature interviews and video conversations among scientists, engineers, writers and members of the public. Submissions will be accepted on the site until Dec. 1, 2012 with the winners announced in early spring and a finished anthology distributed at Emerge, Feb. 28 through March 2, 2013.

Additional information about the Center for Science and the Imagination, Hieroglyph and Tomorrow Project USA is available online.

About the Center for Science and Imagination:

Arizona State University’s Center for Science and the Imagination brings writers, artists and other creative thinkers into collaboration with scientists, engineers and technologists to reignite humanity’s grand ambitions for innovation and discovery. The center serves as a network hub for audacious moonshot ideas and a cultural engine for thoughtful optimism. We provide a space for productive collaboration between the humanities and the sciences, bring human narratives to scientific questions, and explore the full social implications of cutting-edge research. For more information please visit csi.asu.edu or follow the center on Facebook (www.facebook.com/imaginationASU) and Twitter (www.twitter.com/imaginationASU).

The Tomorrow Project explores our possible futures through fact-based, science-based fiction and video conversations with scientists and science fiction authors, legends and world renowned experts, passionate advocates and everyday people. Science fiction gives all of us all a language so that we can have a conversation about the future, and these conversations make dramatic changes. For more information please visit http://www.tomorrow-projects.com/  or follow @intelfuturist or join the conversation with #tomorrowproject.

About Society for Science & the Public:

Society for Science & the Public is a 501(c)(3) nonprofit membership organization dedicated to public engagement in science. Established in 1921, its vision is to promote the understanding and appreciation of science and the vital role it plays in human advancement. Through its acclaimed education competitions, including the Intel Science Talent Search, the Intel International Science and Engineering Fair, and the Broadcom MASTERS, and its award-winning publications, Science News and Science News for Kids, as well as a weekly e-publication for the iPad, Science News Prime, Society for Science & the Public is committed to inform, educate and inspire. For more information, please visit www.societyforscience.org or follow SSP on Facebook: www.facebook.com/societyforscience and through Twitter: http://twitter.com/Society4Science