Have you ever been in the middle of an important phone call when suddenly the line goes dead for no apparent reason? Dropped cell phone calls are irritating and far too common. Researchers at Arizona State University are using advanced materials to help us stay connected – literally.

Nathan Newman is a professor in ASU’s Ira A. Fulton Schools of Engineering and the Lamonte H. Lawrence Chair in Solid State Science. Newman created a filter material that is used in eight percent of all cell phone base stations, or towers. This material helps provide cell phone reception in densely populated areas, or in places with interfering mountains or buildings. 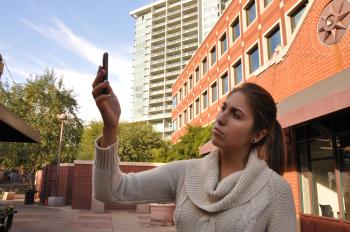 The only downside to this high-performance material has been that it requires cooling, which can be costly. In a recent study, however, Newman and his graduate student assistant, Lingtao Liu, discovered a way to optimize the material so that it can operate at room temperature without requiring cooling. This will reduce cost and improve performance of the entire cell network.

To understand how this works, let’s first look at what happens during a call. An antenna at the top of a cell phone tower receives the signal and sends it down to be processed by filters, which distinguish one phone call from another.

“They need a very precise filter to listen to each particular channel in a very busy network,” Newman says. “The better the quality of those filters, the more cell phones a tower can support. The number of dropped calls also declines as quality goes up.”

The first step Newman’s group made was to choose the right starting material. Filter materials are composed of oxide ceramics, similar to those used to make decorative pots in your home. Typically, Newman says, oxide bonds do not have angular rigidity. Instead, they act like a room full of bowling balls.

“If you stood on them, you’d fall right through because the bowling balls slide right past each other,” Newman says.
As microwaves pass through the filter, atoms in the filter material vibrate against each other and the signal loses energy. But if certain chemicals are substituted, the material becomes stronger. No one knew why until now.

Newman explains that a special kind of bond is occurring that acts like Tinker Toys rather than bowling balls. “Some of the electrons in the inner shells, those that typically do not take part in bonding, transfer from one atom to the other to form rigid structures,” Newman says. The technical term for this is directional d-electron bonding. It’s similar to the covalent bonds that make diamonds so hard, and it’s what makes certain materials ideal for use in the filters.

This understanding allowed Newman and Liu to choose an appropriate starting material. Next, they investigated additives that are used to keep the filter’s frequency locked on a particular channel and not drift with temperature.

The scientists found that chemicals containing electrons with a magnetic component made the best additives.

“We can apply a magnetic field to the filters to keep the groups of electrons from vibrating and flipping over to the opposite direction, losing energy in the process,“ Newman explains. When this is done, the filter performance jumps to record high levels.

The work that led to identifying this mechanism will appear in the journal Physical Review Letters on Jan. 4, 2013. In a follow-up study that will appear in Applied Physics Letters on Dec. 24, Newman’s team showed that this material could be used in practical applications without needing to be cooled off, unlike previous materials.

In addition to cell phone base stations, the new and improved material has potential to be used in the area of security and defense.

“We’ve already started to give them to defense contractors who are going to try and use them for listening beyond our borders. Right now, the enemy thinks we can only hear so far away, but not if we use super high-performance materials,” Newman says.

Newman holds the Lamonte H. Lawrence Chair in Solid State Science, a position funded by a gift from ASU alumnus Lamonte H. Lawrence and his wife, Regina. Lawrence is the founder of Lawrence Semiconductor Research Laboratory, a Tempe-based company. The chair position supports cutting-edge research in the area of materials science, including research fellowships.

“Nate has been building a great relationship with Mr. Lawrence and the team at Lawrence Semiconductor,” says Josh Friedman, vice president of strategic philanthropy in the ASU Foundation for a New American University. “And in addition to his research achievements, he is leading what is becoming an internationally significant annual conference on epitaxy. He has also been using his lab to engage others across the university, and has even provided opportunities for high school students to get involved with research.”

Forty-two outstanding pianists from around the globe will make their way to Tempe, Ariz. in January as the ASU School of Music in the Herberger Institute for Design and the Arts hosts the 6th Bösendorfer and Yamaha USASU International Piano Competitions in collaboration with the Phoenix Symphony, the Arizona Young Artist Committee, and the Arizona Piano Gallery. The public is invited to witness these fantastic young artists from Jan. 6-13, 2013 in a competition that is considered one of the best in the world.

A total of 198 pianists from 31 countries applied to compete. The 42 selected by a screening committee compete in the semi-final and final rounds for prizes including over $50,000 of cash awards, engagements with the Phoenix Symphony, and recital performances in the United States, Austria and Germany for the winners. 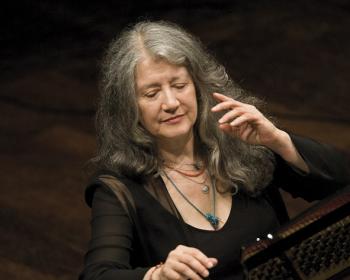 Pianists hail from Brazil, China, Korea, Poland, and Russia – to name a few countries – and also come from some of the world’s most prestigious music schools, including: the Juilliard School, the Moscow Conservatory, the Royal College of Music in London, and the Paris Conservatory.

“Our community can experience first-hand the amazing and talented pianists from all across the globe at a top-tier competition,” says Baruch Meir, associate professor of piano in the ASU School of Music and founder, president and artistic director of the competitions.

Legendary pianist Martha Argerich joins the panel of judges this year, an incredible addition to the competition. Argerich, one of the most prominent pianists in the world both in popularity and ability, presents a Gala Recital together with Sergei Babayan and other members of the jury at 7:30 p.m., Jan. 6, in Katzin Concert Hall on the ASU Tempe campus. The program features Rachmaninoff’s tempestuous Suite No. 2 and other works for two pianos. This special ticketed concert kicks off the international competition and tickets can be purchased through the Herberger Institute Box Office.

New to the 2013 competition, we are pleased to announce a partnership with the Phoenix Symphony that brings the final round of the Bösendorfer Competition to beautiful Symphony Hall in downtown Phoenix. The finalists are showcased playing a concerto with The Phoenix Symphony under the baton of Michael Christie. The announcement of winners and the presentation of medals will immediately follow onstage at the conclusion of the performance. The concert takes place at 7 p.m., Jan. 13 and tickets can be purchased through the Phoenix Symphony Box Office.

The Winner’s Recital and Awards Ceremony for the 6th Yamaha USASU Young Artists Junior and Senior International Piano Competitions is presented at 7:30 p.m., Jan. 12, in Katzin Concert Hall. This concert highlights the junior and senior competition winners and tickets can be purchased through the Herberger Institute Box Office.