A team of researchers from Arizona State University and Mayo Clinic is showing how a staple of earth science research can be used in biomedical settings to predict the course of disease.

The researchers tested a new approach to detecting bone loss in cancer patients by using calcium isotope analysis to predict whether myeloma patients are at risk for developing bone lesions, a hallmark of the disease. 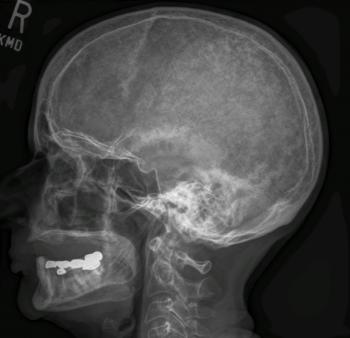 They believe they have a promising technique that could be used to chart the progression of multiple myeloma, a lethal disease that eventually impacts a patient’s bones. The method could help tailor therapies to protect bone better and also act as a way to monitor for possible disease progression or recurrence.

“Multiple myeloma is a blood cancer that can cause painful and debilitating bone lesions,” said Gwyneth Gordon, an associate research scientist in ASU’s School of Earth and Space Exploration and co-lead author of the study. “We wanted to see if we could use isotope ratio analysis, a common technique in geochemistry, to detect the onset of disease progression.”

“At present, there is no good way to track changes in bone balance except retrospectively using X-ray methods,” said Ariel Anbar, a President’s Professor in ASU’s School of Earth and Space Exploration and the Department of Chemistry and Biochemistry. “By the time the X-rays show something, the damage has been done.”

“Right now, pain is usually the first indication that cancer is affecting the bones,” added Rafael Fonseca, chair of the Department of Medicine at the Mayo Clinic and a member of the research team. “If we could detect it earlier by an analysis of urine or blood in high-risk patients, it could significantly improve their care,” he added.

The research team – which includes Gordon, Melanie Channon and Anbar from ASU, as well as Jorge Monge (co-lead author), Qing Wu and Fonseca from Mayo Clinic – described the tests and their results in “Predicting multiple myeloma disease activity by analyzing natural calcium isotopic composition,” in an early online edition (July 9) of the Nature publication Leukemia.

The technique measures the naturally occurring calcium isotopes that the researchers believe can serve as an accurate, near-real-time detector of bone metabolism for multiple myeloma patients. Bone destruction in myeloma manifests itself in bone lesions, osteoporosis and fractures. The ASU-Mayo Clinic work builds on a previous NASA study by the ASU team. That research focused on healthy subjects participating in an experiment.

“This is the first demonstration that the technique has some ability to detect bone loss in patients with disease,” said Anbar, a biogeochemist at ASU.

With the method, bone loss is detected by carefully analyzing the isotopes of calcium that are naturally present in blood. Isotopes are atoms of an element that differ in their masses. Patients do not need to ingest any artificial tracers, and are not exposed to any radiation for the test. The only harm done with the new method, Anbar said, is a pinprick for a blood draw.

The technique makes use of a fact well-known to earth scientists but not normally used in biomedicine – different isotopes of a chemical element can react at slightly different rates. The earlier NASA study showed that when bones form, the lighter isotopes of calcium enter bone a little faster than the heavier isotopes. That difference, called isotope fractionation, is the key to the method.

In healthy, active humans, bone is in “balance,” meaning bone is forming at about the same rate as it dissolves (resorbs). But if bone loss is occurring, then the isotopic composition of blood becomes enriched in the lighter isotopes as bones resorb more quickly than they are formed.

Anbar said that while the method has worked on a small set of patients, much still needs to be done to verify initial findings and improve the efficiency of analysis.

“If the method proves to be robust after more careful validation, it could provide earlier detection of bone involvement than presently possible, and also provide the possibility to monitor the effectiveness of drugs to combat bone loss.”

For 10 years, the Osher Lifelong Learning Institute (OLLI) at Arizona State University has brought low-cost educational and cultural courses and programs to adults ages 50 and over.

For 10 years, the Osher Lifelong Learning Institute (OLLI) at Arizona State University has brought low-cost educational and cultural courses and programs to adults ages 50 and over. This fall, with over 90 classes in history, art, music, opera, travel and creative writing, science, current events, literature, geography, religion, physics, space, Shakespeare and more, there is something for everyone.

Fall classes include diverse topics such as The Science of Dog Intelligence; The Morass in the Middle East; Religious Traditions of the World; Artists of the American West; Genetic Disorders and Medical Ethics; Exploring the Masters of Jazz; and a class on the historical use of cadavers in medicine and science called Grave Robbing for Fun and Education. 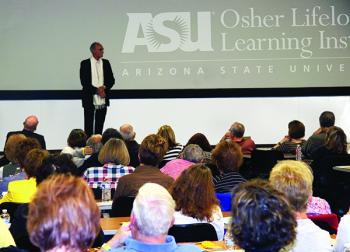 Theater buffs have the chance to attend a class on the history and development of improvisational and murder mystery theater, followed by a seat in a full-stage production of "Sheer Madness," presented by the Phoenix Theatre.

New this semester, OLLI is offering its first class in Spanish. Escribir Phoenix (or Writing Phoenix) will be held at the ASU Downtown Phoenix campus and led by ASU Regents’ Professor David Foster. OLLI is also holding school on Saturdays this fall at the Tempe Public Library, with a class called From Hildegard to Streisand: Perspectives on Women in Music.

“The 50-plus generation is now known as the encore generation,” says Richard Knopf, director of OLLI at ASU. “Never has there been a greater thirst by seniors to explore, chart new destinies, expand horizons and serve others.”

OLLI is part of ASU’s Partnership for Community Development in the School of Community Resources and Development, part of the College of Public Programs. Each fall and spring, OLLI showcases a new lineup of low-cost educational and cultural courses and programs, all without tests, grades or educational requirements.

Registration is now open for fall short courses and lectures that begin in September, October, November and December. Classes are conveniently located in locations throughout the Valley: the ASU West and Downtown Phoenix campuses, Tempe Connections at the Tempe Public Library, Friendship Village Tempe and Maravilla Scottsdale.

OLLI at ASU is funded in part by the Bernard Osher Foundation, which supports university-quality educational offerings for mature students interested in learning for the love of learning. ASU is one of several colleges and universities across the United States to have been awarded a permanent Osher Foundation endowment to sustain and support its programs.

The printed schedule will be available in late August at most public libraries, senior and community centers, and is now online at lifelonglearning.asu.edu. Course registration is available online. Call 602-543-6440 for more information.